This has been the busiest October I can remember in years. A ton of stuff has happened and much of it was not good. As a result, I've fallen several weeks behind on the "30 Years On Project", and it has been three weeks since I went to a movie (my last two posts were a week late). That being said, when I finally did get a chance to see a film, I pigged out on a low brow action film instead of a high profile prestige movie. It was a very satisfying meal and the popcorn chaser was excellent, uhmm, I've missed popcorn almost as much as going to a movie. Keanu Reeves entertained us today in the revenge story of "John Wick".

I'm sure I've said this in some other post about a film with these sorts of characters, but it appears that the most in demand job is not physical therapist, engineer, or administrative professional. According to the movies, professional hitman is the career of the decade and Keanu as John Wick happens to be the most dangerous. The storyline has him retired and grieving his lost wife. He manages to feel some hope because she has left him a puppy to help him get through his mourning. Dumb-ass Russian gangster types make the mistake of both stealing his prized Mustang, but killing the dog as well. That may be a spoiler if you have not seen the trailer, in which case I'm sorry, but I think everyone headed into see this, knows that Wick is pulled back into his vocation by the injustice of this act.

Earlier this week, I invented a quote to use in my class for an Impromptu speech topic, "Never trust a man who doesn't love a dog." I know I can't ever forgive Michael Vick and while I don't dislike people who don't care for dogs, I do not understand them. An addendum to the invented quote should also be "Don't ever screw with another man's best four legged friend." Dirty Harry got downright nasty when someone kicked his dog, John Wick goes even further, the Russian mobsters go down like [insert tasteless cheerleader joke here]. I'd like to see this again, just to engage in my own tally of dead crooks that Wick leaves in his wake. I know that a dozen get killed in the first main confrontation, and that is only twenty minutes or so into the movie. This is the sort of over the top violence fantasy that can only exist in a movie that is not really all that good but is as entertaining as hell. If I ever have the time, I might try to reproduce the splendid statistical analysis my on-line friend Dan Fogarty did on the Schwarzenegger classic "Commando". Wanton death on a scale like this deserves it's own special kind of foolish attention.

There are a host of actors in the film that are almost always a welcome addition to a movie. Ian MacShane, John Legazamo and Willem DeFoe all lend a hand to make this a little better than it has any right to be. We also enjoyed the fact that the guy who plays "Mayhem" in all those insurance ads that run during college football season, got a chance to have a few more lines, even though in the end, he gets treated a lot like he does in those ads. Michael Nyqvist, the guy who is the journalist hero in the "Girl with the Dragon Tattoo" films (the Swedish Originals), is the main Russian mobster in this movie, it is his son who does the stupid crime that sets off  mobster killing time. He also does a pretty good job being a loathsome character that deserves what he gets. 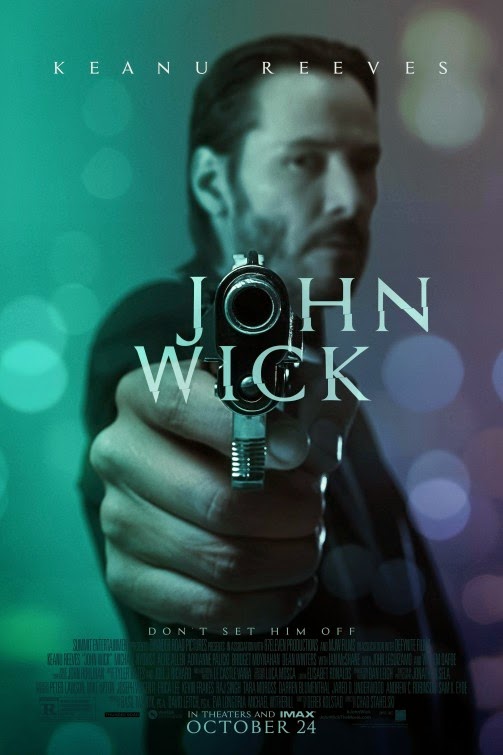 If you are a regular reader of this site, you know that I am a sucker for revenge based films. Liam Neeson and Denzel Washington have lead the way in the last few years but I'm happy to add Mr. Reeves to the pool of killers of miscreants that I enjoyed spending time with. I may be one of the few people to see "47 Ronin" much less actually like it. This role requires the deadpan delivery and mopey expression that Keanu Reeves is known for. He also gets to use the physical skills that he has been employing for the twenty years since "Speed" made him an action hero. There is not any subtlety or surprise in anything that happens in this story, but it is efficiently told and cathartic for all of us dog lovers who would like ten minutes with Mr. Vick tied to a chair and a baseball bat in our hands. It is a fantasy, not a serious film and that's exactly the sort of stuff I was in the mood for.

Posted by Richard Kirkham at 9:13 PM

Oh, yeah! This was a lot of fun, had great production values, and a number of fine performances. Strictly an action junkie's fix, but you and I need this on a regular schedule to keep us sane I surmise ;-).

Yep, it is catharsis in two hours and pretty well made.