Once upon a time, movie goers embraced Tim Burton and his mildly weird vision of the world.  It was a time of wonder when Michael Keaton and Johnny Depp were fairly new to the world and the cynics and haters did not assume that a movie would suck because Burton had cast them in another one of his movies. It was a time when Danny Elfman found a musical voice in the world of Tim Burton and angry mobs did not march the corridors of the movie complex looking for tomatoes to throw. Like the fable I just shared with you, "Edward Scissorhands is a gentle parable on tolerance, if it were made today audiences would yell"sellout" and then post snarky comments on "Twitter".

I'm going to look at this as if it were 1990 all over again. A movie trailer would bring a tear to your eye rather than a snort through your nose. This movie is so whimsical and sweet that it would be advisable to check your blood sugar before you start watching it. It is almost so sweet that you forget what a bitch Kathy Baker's character was and you can overlook the fact that the sad eyed innocent of the story kills the rival for his love interest. Instead, everyone's memory will be of the kitschy topiary, the pastel colored houses and clothes and the dreamy version of Johnny Depp when his tattoo did not say "wino forever". We will recall how chipper Diane Wiest's Peg is and how beautiful it was when Winona Ryder spun around in the snow made by Edward as he turned to ice sculpture in his frustration.

This was a Christmas time release, it is a cult hit of course but, it might have had a bigger box office start if it did not open the same week as "Home Alone". I recall the topiary from the movie being featured on the medians of Beverly Hills during the holiday season. This was a movie made for date nights and sentimentalists and driving through the richest shopping areas in the world at the time, the presence of leafy tyrannosaurs and dancing ballerinas just seemed the right way to draw attention to an offbeat love story during the season. Whereas we once embraced the oddball character at the heart of the movie and his cinematic progenitor, today we look at them the same way the citizens of the cul-de-sac from the movie did. What we loved we are now embarrassed to have taken to heart, and the guy with the wild hair (Burton not Edward) is viewed with suspicion.

My own kids can be pretty cynical at times but they are both nostalgic for this movie. This is one of the few of the AMC Classic Series that I could convince them both to go to. It so happens that I was able to bribe my wife into accompanying us and she of course has fond memories of the movie as well. Vincent Price was priceless in this his last role, and everyone one else did a terrific job being clueless, blind, hostile and befuddled all at once. Kathy Baker did the sultry lonely housewife bit with just the right amount of tartness thrown in. Alan Arkin is so clueless and says the most inane and wise things at the same time, he creates a template for characters he will play for the next twenty four years. Johnny Depp and Winona Ryder were just beautiful together. She was so popular at the time that she had a second film in the top ten the same week, "Mermaids". Edward is all naivete, wrapped up in leather with sharp objects for hands, no wonder he became a fetish item for shoppers at Hot Topic over the years. 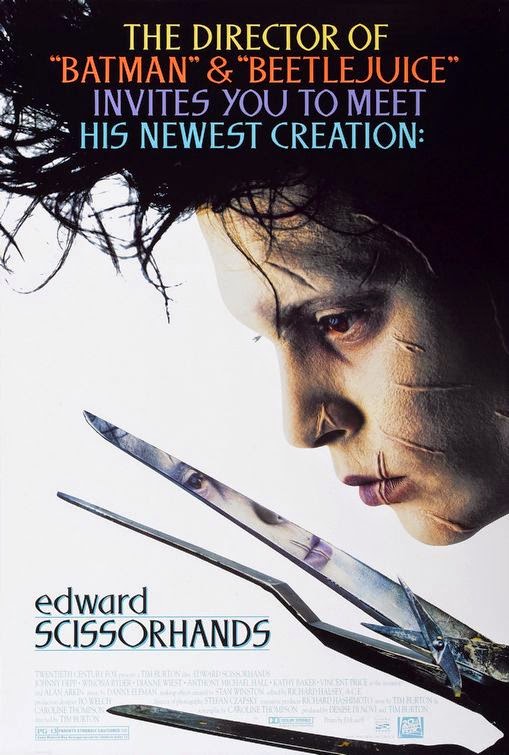 This is an example of "they don't make em like that anymore" because the world has changed. Kids want to be empowered not misfit, they want passion not tenderness, and sweet in the views of most kids these days, is the territory of children's films. Maybe it's best not to listen to me, after all, I still like Johnny Depp, and I still like Tim Burton, and "Edward Scissorhands" is one of the few modern fairy tales that can warm my heart. I'm just a big marshmallow, and this movie roasts me over the fire still.


Posted by Richard Kirkham at 7:46 PM

Loved the review. This may sound goofy but I enjoyed the review more than the movie. But to be fair it is one I've always said I need to revisit.

Thanks Keith, I'm sure the movie is better but the review was fun to write.