What criticism can you make of a movie that features giant robots battling giant monsters? Once that premise is accepted, everything else simply comes down to technical execution and storytelling. I can't imagine that there is any way that someone could get pulled into this movie by accident and not anticipate a bunch of action sequences featuring giant creatures battling each other. I know that the "Transformers" movies have gotten a lot of crap over the years, but let me put it simply, people like to watch big creatures fight each other while cities get crushed. Ever since the man in the dragon suit crawled out of the bay in Tokyo, and the big Gorilla got loose in New York, we have been interested in the wanton destruction such a scenario presents. Post 9/11 I think there may have been some hesitation on this stuff but it is clear that the audience can separate the nightmare from the movie.

"Pacific Rim" is basically "King Kong vs. Godzilla" with better special effects and a more human centered focus. This is another alien invasion movie with a premise as old as a Japanese horror film from the fifties. It works mostly because the effects are convincing and the battles are creatively presented. I don't want to take anything away from Director and Co-writer Guillermo del Toro, because he did come up with some very interesting visuals and a complex technical background for the movie, but the premise sells itself. I liked this movie when it was called "Robojox" and featured more primitive effects, so there is almost no reason for me not to like this. It features a large cast of familiar but distinctive faces, none of whom are house hold names, because what would the point of that be? There are a couple of sub plots designed to add a human element to the movie, pay no attention, they never develop and would be distracting if they did. You do need the humans to make this a story rather than just a cock fight, but don't expect any depth to those human elements. The search by the nebbish scientist for a monster brain to sync up with is designed to add some humor and humanity to the mixture, is is just enough salt to add to the flavor without changing the recipe.

The movie starts off years after the invasion has begun. The first five minutes of the movie could easily have been the movie that this is a sequel to. There were even a couple of story strands that I think might have made the movie a little more meaningful, for example the commercialization of the invaders and the warriors that fight them, or the politics and economics that come from waging this seemingly endless war. Those thoughts fo out the window in two seconds and we get the essential ingredient of the movie right away.  We get to see imaginative technology that is currently impossible be used to kick some tail of big assed monsters. The names of the invaders are Japanese, acknowledging their roots in Godzilla movies and the term used for the warriors sounds like a German liquor so no stereotyping there. The cast is multinational and the defenders of the planet are multiracial. Nothing brings people together like the end of the world. The American scientists talk so fast you can't really understand them, the Australian warriors are played by Brits and Americans, we never hear the Chinese team speak, but the Japanese co-pilot is an Oscar nominated actress and we can usually understand what she says even if we don't understand why she is saying it.

Enough of the cinema analysis, none of that matters because we get to see monsters fight each other. There are really only three major battle sequences. Two of them are staged at night in the rain, just to add atmosphere. The third takes place under water and is the climax of the picture. Unlike "Transformers" because you have monsters vs. robots, the audience can usually tell what is going on in these combat sequences. Sometimes the monsters have developed a new physical characteristic that makes the battles a surprise.  There was a spontaneous outburst of cheers and applause at one of the strategies employeed by our main team of robot operators. So it was clear the audience was motivated enough to root for the good guys. There is a lot of inventive imagination in creating the complex technology that the humans use to make the monsters work. It is fun to see the erector set be assembled by the film makers and then turned on and it does what we want it to do. For two hours we got to be entertained. 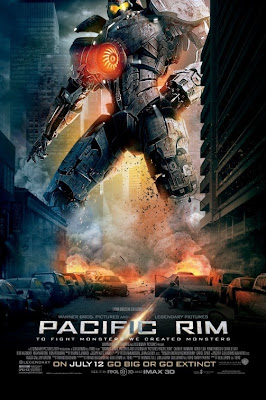 Obviously this is a giant B movie. It has no purpose other than to entertain for the time it is running. The movie stands on it's own, so if it does tank financially like many suspect it might, we will not be left hanging waiting for a sequel that will never arrive. It was very entertaining, but not because the story was new or the characters mattered, it was all the high concept premise. So I have come full circle to my original question. What criticism can you make of a movie like this? The answer is not much. Better to sit back and enjoy it while it runs. You will have fun, but it is a very safe film without the grit and dirt under the fingernails that would make it more interesting. I had a fine time and you will too, and there will be something else next week.
Posted by Richard Kirkham at 8:55 PM

Easily, my favorite movie of the summer season. Guillermo Del Toro does it again -- made me care about the characters, and in a gonzo B-movie. IMO, this ran rings around Iron Man 3, ST Into Darkness, Man of Steel and the rest. Heading back tomorrow to see it again, this time with my kids ;-).

A highly repeatable experience. Glad you liked it, I enjoyed it but not quite as much as you did. Have fun, the kids should really dig it.

I'm glad you mention that it's a film you can't really criticize. I tried to take that approach with my review as well. It's never meant to be some game changing mind blowing experience. It's fun as fuck and that's all that matters.

You either accept the premise and enjoy or roll your eyes and snark. I choose to enjoy. Thanks for coming by Nick.

Well said, and honestly, that's really my main reaction towards this movie, is that it's just flat out enjoyable. I would have liked for it to have dived a little deeper into the psychological aspect of "drifting", though I also acknowledge that that's not really what this movie was about. It was just about having a fun time at the movies, and in the end, that's precisely what I got. :)

Yeah, it is fun but that's about it. Very entertaining. Thanks for chiming in Chris.

Nicely put. It's definitely a big ol popcorn flick. Not
Much (maybe even nothing) to think about, just enjoy watching robots and monsters beat the snot out of each other!

You're right, too, the fight scenes here are a vast improvement over Transformers because you can tell what the hell is going on!!

Saw your review Dan, it is spot on. This is just Fun but it is a 1/4 inch deep. Have some corn and Coke and enjoy.