Last year, I went to the mattresses to defend an expensive, high concept, potential franchise film from the Disney Company that bombed. Here I am fourteen months later about to do the same. I thought "John Carter" was true to it's roots and was a lot of fun and it is a shame that we will not get to see more of Edgar Rice Burroughs hero. The new Bruckheimer Production of a Gore Verbinski film, starring Johnny Depp, takes a classic story concept, twists it ever so slightly and winds up with an entertaining film that is going to leave egg on the face of everyone who went ahead and agreed to make the movie. I don't think that box office is the determining factor of a films entertainment value. While it is true that the audience ultimately has to decide, I think there are plenty of examples of where the audience has decided poorly and everyone knew it. This will be a case where they don't know that they chose poorly and the analysts of box office doom will make it appear that they were correct. 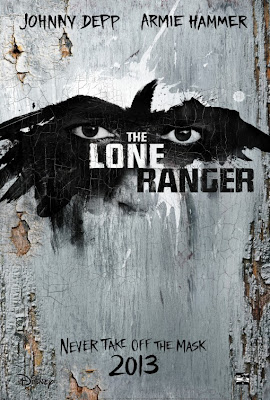 "The Lone Ranger" has been a pet project of Johnny Depp for almost a decade. Just before the orginal start of production the plug was pulled and the studio and film makers had to negotiate changes in the story and budget to make the movie feasible. I can't explain all the financial ramifications or the economic consequences to the studio and film makers, but I can say they did a pretty good job making an entertaining summer picture that should work for the audience but doesn't for some reason. The production value is top notch, there is plenty of humor in the story, some great action pieces and the charm of Johnny Depp in an idiosyncratic interpretation of Tonto, the Lone Ranger's Indian companion.  Armie Hammer plays John Reid, the Lone Ranger, but Depp is the star of the movie and it is his shoulders that the movie must stand to reach it's potential.

The opening forty five minutes of the movie feature a well known legend, of how a posse of Texas Rangers is ambushed and only one survives. In this version, the Rangers escape from death is attributed to the intervention of supernatural forces brought together by Tonto, a vengeance seeking hunter of Wen-dingo, and a horse believed to be the connection to the spirit world. We come to know the horse as Silver, and he should have been third billed in the picture given his significance, screen time and contribution toward the enjoyment of the story. That opening segment contains a great bit of train stunt work and humor. It was very reminiscent of the water wheel duel in the second "Pirates" movie. It was easy to follow, preposterous in almost every way and executed with enough aplomb to satisfy an audience hungry for something different. I found it to be much more  involving and interesting than the convoluted multiple "Ironman" robot clones in the finale in "Iron Man 3". There is an even more complicated train sequence at the climax of the film that works almost as well although it was a bit more confusing to follow.

The middle of the picture has a great deal of exposition, and while at times clever, it takes a while to get through it all and that section feels slow. There is a pretty good shootout and the production design is fine, but it can't quite sustain itself. There are a couple of subplots that involve the two women featured in the story and that just seems to detract from the momentum of the story. Two old hands at playing villainous characters are in the film. William Fichtner is barely recognizable under the make up but plays the slimy gun-slinging cannibalistic evil front man with some gusto if lacking in panache. Tom Wilkinson is the respectable side of the treacherous plot and we only discover how deeply he is involved as the picture goes on. Once again, a story like this depends for it's success on the quality of the villain and their plot. I thought all of it worked just fine to make me want to see justice from our heroes. The twist in this movie is a take off on a similar theme from earlier films. The first of which that occurs to me is "Without a Clue". This Michael Caine/Ben Kingsley film from the late 80s, imagines that Watson is the real genius behind Sherlock Holmes. A couple of years ago we had the same plot twist with "the Green Hornet", where Kato is the real force behind the crime fighters. Here, Tonto is the driving force behind the events that take place. John Reid (the Lone Ranger and by the way the great grand Uncle of Brett Reid, the Green Hornet) is the naive bumbler who gets taken for a ride. While Hammers version of the Ranger makes him "green", he is not without fortitude and a code that become a part of the story. I saw him less as the butt of the jokes than as a part of the comic duo of the Ranger and Tonto. He is the straight man, but he has some humorous moments at other peoples expense not just his own. 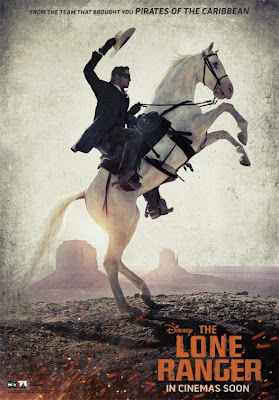 The movie could stand to be tightened by twenty or thirty minutes. There are some long sections of exposition, and a flash back structure, that tend to slow the movie down. On the other hand, there is a great use of Tonto's crow headpiece that is both funny and in keeping with the supernatural theme. I also appreciated the bunnies in the movie. It reminded me of Monty Python and I laughed out loud a couple of time because of that. I really enjoy westerns and that may be in part why the movie is out of touch with today's audience.  Genres ebb and flow and I get the impression that right now, the western is at low tide. I also suspect that comic book movies are sucking the wind out of the room for big action films. Except for the "Fast and Furious 6" and "Star Trek Into Darkness", big budget movies that have succeeded this year have been of the super hero variety. Maybe this is a double edged sword. We get the comic book movies we want but are distracted from the other things that ought to draw our attention. "The Lone Ranger" did not have good word of mouth from early on because of the production cost fiasco, and then reviews have been weak. I believe that most film audiences will enjoy it and when the William Tell Overture fully kicks in toward the end of the picture, we will be shouting Hiegh-Ho-Silver ourselves. I was very happy to turn back to those thrilling days of yesteryear, and I'll tell you who that masked man was, he was a guy I'd enjoy seeing again and will miss until the next time someone finds the courage to try this franchise, twenty or thirty years from now.
Posted by Richard Kirkham at 12:35 AM

We're in sync re: this film, Richard. Saw this on vacation and enjoyed it more than I expected, especially the bad press. Crowded theater, too, and they got into it as well. Yes, using Monumental Valley, Utah for Texas was pretty grievous (relocating the Promontory Point transcontinental railroad meet, too). But, this is a adventure movie and not history. The Pirate of the Caribbean comparison is apt. Well done, my friend.

p.s., you know John Kenneth Muir and I have your back regarding JOHN CARTER ;-).

Thanks Michael, John Carter was a terrific film and this one is as enjoyable as heck. I'm on my way now to a few other sites to defend it. I can see it's flaws but I also smiled throughout the movie. Lots of laughs and inventive action.

Very nice Richard, glad to see someone else share my opinions on this one. Then again, knowing how much we both like westerns, I wouldn't have expected anything else.

Hurrah for the cowboy movie. Thanks for coming by and backing up my view, it was a lot of fun.

I agree Rich. This movie did have issues and could have used some trimming, but was highly enjoyable due to the action set pieces and Johnny Depp's Tonto. It's really nice to find someone else who recognizes the virtues of this film, there seems to be a chorus against it. :(

You're on your own with John Carter though ;)

The John Carter battle was lost last year, this one appears to be lost as well but it is still in theaters and I still encourage people to give it a shot. As always glad you made it by.