Basically I have no memory of the X:Men Origins Wolverine film. There were a couple of characters that were used in the movie that I recall but I don't know if they were good bad or indifferent. That's not to say I thought it was a bad film, everyone else has already said that. I think I enjoyed it while it was running and then it promptly went out of my head. I have not seen it since. "The Wolverine" has fewer X:Men and a simpler story. It was relatively easy to follow and there were some good action sequences. I can't say that I will ever see it again,but I enjoyed it while it was on and it seemed a more substantial film than the last one was.

Hugh Jackman can play this role without having to over do it because he was well cast to begin with and it looks like he has been in training for the part for fifteen years now. Logan is living like a real wolverine, hiding from the bad past and creating a fantasy relationship with the late Jean Grey. It is another version of the tortured soul as a character trait of a super hero. It fits fine because we know eventually he will stop moping around and start kicking some butts. When he does, he is identified and then reunited with a man whose life he saved many years earlier. The plot then proceeds from the obligation one man feels and the desire that another man develops.

As far as I could count there are only three mutants that participate in the story. That should allow things to remain relatively simple, but there are also at least three other groups involved with the family corporation run by Logan's old friend. The loyalties and animosities going on here are a little complex but mostly it comes down to yakuza versus ninjas. Sometimes the ninjas are on "The Wolverine's" side and sometimes they are not. There are however several fight scenes that combine both elements and then throw in the Wolverine to make it all more relevant to us, the audience. The idea of immortality as a curse is not new, but for this character, it seems to be important because otherwise he is invincible. Chemical biology and a mutant combine to create Wolverine Kryptonite. This makes the middle section of the picture a more dangerous place for our hero. The vulnerability subjects him not only to risks from his enemies but it allows him to consider a life that he thought could never be his. Basically he can begin to resolve his guilt issues and feeling of isolation because he is a more susceptible hero.

The vast majority of the film is set in Japan. There are gleaming Tokyo neon night spots where danger lurks. There is also a "Hidden Fortress" on a him, overlooking a smaller city which is closer to being a village. Logan spends time in the seaside town of Nagasaki as well. The history of which is part of the bigger story. The settings make the movie more distinctive than other X:Men movies. Local traditions and cultures mix up the motives of the participants in the story and the setting makes the battles look more exotic. As Logan tries to protect a young Japanese woman from the forces that seem to be after her, she contributes to the problem by acting as if she is unclear that there is a threat or that he is something different. Once these characters become more involved, she begins to act in a more consistent manner, one that is a lot more logical. At that point the movie settles down and has a much clearer plot line to follow. 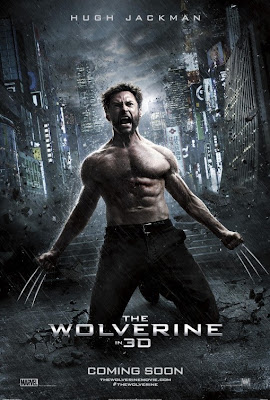 I know the film is PG-13 because we get only one f-bomb, and the blood from all the fighting and evisceration that is taking place, stays mainly on the characters. Body parts don't come flying off the screen, there are no fountains of blood spraying the walls, and the violence remains mostly in the imagination. Even though we know that if those claws of the Wolverines were used the way he uses them, and the swords that all the character wield would produce galleons of crimson everywhere, it is a fairly tame visual atmosphere.  There are several battles that seem to be climatic, but of course there is always one more to go through. Stick around for a stinger that should make you anticipate the next X:Men movie as well. This is not as great a film as X:men First Class was, but it beats the heck out of "Iron Man 3".
Posted by Richard Kirkham at 12:00 AM

I enjoyed the Hell out of this, even though it has its problems. But, this is Jackman in is best role. And yes, it beat IM3, no question.

I am as you can tell a casual X:Men fan. It was very enjoyable, and you can follow it without having seen every other X;Men movie in the last week.