The overwhelming majority of reviews of this film have been negative. I try to avoid reading other people's material until I have seen a movie myself. I want my opinion to be MY opinion. Yet in the past month the stink on this film has pervaded the inter webs. The trailers make the film look like a refugee from the late 1990s, and Ryan Reynolds couldn't buy a hit if he won the powerball. Well let me tell you, there is a reason for all that chatter and smell, the movie isn't very good. I suppose it is faint praise to say I did not hate it, but it is likely to end up on my list of disappointments at the end of the year. I can't imagine that there will be many more films that waste as much potential as this.

I'm a fan of Jeff Bridges. He is a terrific actor and he has a great body of work. This movie probably seemed like a lark, something that would be light and fun and just right for the summer. In concept it is. Or maybe I should say it was. We basically saw this movie in 1997. You know what the reference is. I am going to try and go the whole review without making any direct reference to the film that everybody knows this is basically a knock off of. Instead of having all those qualities that I am guessing Mr. Bridges hoped for, this movie is lazy, loud and not very clearly thought out. The plot is straight out of every sci-fi/action film that precedes it. A hero is plunged in over his head, learns the ropes from a mentor, discovers the nature of his betrayal is more significant than he thought, and has to stop a plan that will let in the end of the world. Check almost every comic book film of the last couple of months or years. Look it can still be done with pizazz, like "The Avengers" or "Pacific Rim", but there is no flair here. It just hits the notes and moves on to the next riff.

Bridges should be a selling point but instead he is a reason to dislike the film. The accent he affects here is as ridiculous as Nick Cage in "Peggy Sue Got Married" and as hard to understand at times as Bane in the IMAX scene trailer for last year's "Dark Knight Rises". In addition, he never stops rambling on. The jokes might work if they were polished and delivered with some timing, but there are so many of them, they are rushed and sometimes they just repeat the same bit of business we had in an earlier scene. There are at least four spots where we are treated to a review of the story concerning Bridges characters mortal remains. The last one tries to make a joke out of the phrase "SkullF**K". Instead of a laugh, it is just a moment in the movie where we are saddened by the lack of any creative and humorous spark. At one point in the film, Ryan Reynolds character tells Roy (Bridges) to just stop talking. Everyone in our group agreed it would be good advice.

The CGI special effects go overboard to make disgusting "Deados" gross and creative. They succeed only in the gross part of the equation. Never are any of them particularly frightening and so much of what happens is cartoony that it undermines any interest in the action. Some of the problem is that we have seen all of this before, and the second problem is that it was not well executed, and the third is that they go to it whenever they need something to pump up the energy. Instead it is energy draining. Even the name for the bad guys "Deados" feels lazy. It is supposed to be clever and the slang of the R.I.P.D, it doesn't feel organic, it feels like a compromise to make the story simple. 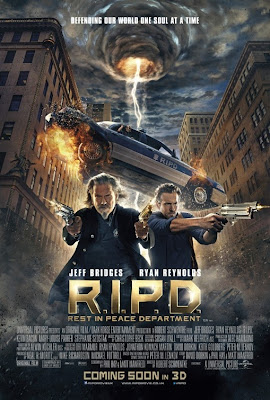 The concept of a "Police" force pursuing the undead in the afterlife is not a bad one. It's just treated badly by the creative team that put this together. There is a funny idea to use an avatar character in the place of the actor cast in the part, when the R.I.P.D. encounter the living. There is a good set up of the two alternate visions, and then they do nothing with it except repeat the same joke. James Hong is one of those character actors I like seeing in films, but he may have two real lines in the movie and neither of them was done in an interesting or humorous context. It was a complete waste of the potential and another example of the laziness of this screenplay. There is some nice production design, and not all of the visual effects are failures. I liked the sequences where some characters are frozen in time while others are moving rapidly, the cinematography on those shots looked good. Yet every time a "Deado" gets revealed, it just looks cheesy, and not in a fun way. I saw two Ryan Reynolds films and two Mary Louise Parker films in the same week. The good one for each of them is the one that is not this. At the end of the story, it was clearly set up for a series of films. Given the autopsy that this movie has been given, those plans can...well, you know.
Posted by Richard Kirkham at 8:32 PM

A rental down the line…maybe. Thanks, Richard.

One of the more.. optimistic? reviews of the film I've read. Such a shame that it did so poorly and was, well, made so poorly as well as the idea is a fun one. Yes, the comparisons are crazy similar to Men in Black, but both films are adapted from graphic novels. Not sure which one came first (I assume MiB), but plenty of lore to work with. Reynolds is spiraling into the world of terrible, and I feel bad for him.

I think Reynolds could be a bigger success, but someone in his camp needs to have more discriminating taste. Like I said, I did not hate it, I just didn't care after a while.