Once Upon a Time in Hollywood

I came to this film with the highest of expectations. It was my most anticipated film of this year, the trailer is fantastic and it covers a period of time that I lived through and remember. The subject of the movie is Hollywood itself and it's made by Quentin Tarantino. Through the roof were my hopes for the film. Let me preface my more in-depth comments by saying first that I loved the movie, but in total, there are issues and my expectations may have hindered some of my reaction to the movie in both positive and negative ways. As always, this is a personal reflection of how I saw the elements coming together, your mileage may vary.

The best thing you can do for yourself in seeing this film is not to read anything about it beforehand. I'm not simply talking about spoilers, I'm really referring to the impressions that people will have and the surprise that comes from the discovery of what this movie really is. I stayed away from every review and every press release about the movie. It was impossible to avoid some things but I lucked out in that no one revealed how this movie really develops. This is a warning: While I will avoid spoilers, to discuss this film requires that certain concepts be explained and that may inhibit your own reaction to the movie. Proceed with caution or come back after you have seen it.

Tarantino makes movies that are a little bit like a buffet. There are dozens of things to choose from when you want to focus on them, but if you don't have a plan, you may miss something important, or worse, you can mix dessert choices that simply don't pair well. From my point of view, he has lingered over some aspects of the film too long and not offered a main course that is fully satisfying. However, the side dishes are solid and the main confection that comes at the end of the story makes the whole thing worth taking in. I notice that many of the people I follow have done rankings of the Tarantino catalog as part of the process of discussing the movie and it seems fitting to offer a little bit of insight in that direction here. Without giving you a complete nine film ranking, I can say that this movie is better in my opinion than "The Hateful Eight" and "Deathproof" but it does not quite scale the heights of "Pulp Fiction" or "Inglorious Basterds". So that may be an indicator of my tastes and a way for you to measure the film as a consequence.

The three main actors all are terrific but the standout for me is Brad Pitt. As Cliff Booth, the stunt double/gofer to DiCaprio's Western TV Star Rick Dalton, Pitt gets to be amused, sardonic, detached and invested in a lot of different scenes. His back story is completely unnecessary to the plot but as a character point it is interesting. Which is exactly the kind of thing that Tarantino adds to his stories all of the time. The existence of the scene where he faces off against Bruce Lee only means something at the end of the movie and that may be one of those points that you can see coming and that I am hesitant to get into too much detail about. The same is true of his home life with his pit bull Brandy. There will be a payoff down the road and we can see that something is coming but we don't know exactly what. Brad Pitt's best scene however may be a long sequence at the Spahn Ranch, where he encounters something that makes him extremely suspicious and sets up another pay off later on. Although there is a dialogue with two central characters in the sequence, it is really just his facial expressions and general demeanor that makes Pitt sparkle in these scenes.

DiCaprio has a less flashy role here than he did in "Django Unchained", his previous film with Tarantino. His best moments are on the set of a television show he is guesting on, with a conversation between himself and a young actor (because the word actress is meaningless) and also a conversation he has with himself. In previous films by Tarantino, there is a heavy emphasis on language and conversation. Jules and Vincent are compelling because of the way they take mundane subjects and treat them seriously. Col. Landa hoovers over the conversations he has with the French Dairy Farmer, Shoshanna in her disguise and Lt. Aldo Raine, as if he is a vulture looking for a scrap of dialogue he can rip out and feast on. In "Reservoir Dogs" the opening sequence debating tipping is magnetic. Unfortunately, there is nothing that rises to those heights in this film. The one place that Tarantino may have matched his earlier high standards is in the employment of violence in key moments of the film.

There has been some on-line criticism of the shortage of dialogue for Margot Robbie as Sharon Tate. There is an explanation for this but again, let me warn you, it's not a spoiler but it will alter your perception of the story...she is a red herring.  Polanski and Tate are peripheral to what the ultimate outcome is. If that sounds strange because you thought this was a film about the Manson Murders, well, be ready for that Tarantino twist. This is a wish fulfillment fairy tale, in the mode of his best film in my opinion "Inglorious Basterds".  The movie takes us down a path of detailed history about Hollywood in 1969, and at the last minute rewrites it. The details up to the climax are all presented honestly, mixed with the fictional story of the declining career of Rick Dalton, but then there is a sharp right turn. Most of his work before this could be classified as revenge film cinema, and this will neatly fit into that classification. 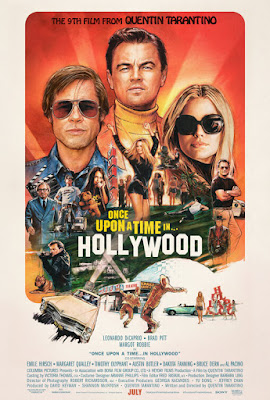 The last fifteen minutes of the movie made everything that was overly long and unfocused in the first two hours irrelevant. Maybe the foreplay was inelegant and slow. It does not matter when the climax is so satisfying that you want to stand up and cheer even though you are witnessing a violent fiction. We want the scum that the Manson Family was, to get the retribution that they so richly deserve and society has denied. We want the sweet Sharon Tate and her innocent friends to be spared from the gruesome history we know exists. We want Rick Dalton to emerge from the crumbling Hollywood system that is taking down his career with some dignity and the hope that things will be better. And we want all of that with the signature overkill that Tarantino employs in most of his movies. This is not a genre take off like Django or Kill Bill and DeathProof. This is an original film that uses our willingness to suspend disbelief to get a result that we dream would be the truth.

I'm going back to see this again on Friday, and I plan on posting a second version of this review in video form. In that I will get into the technical pleasures of the movie and the historical context that made it so enticing for me. For now I will simply say that the movie turns what might have been a disappointment into a triumph. It's a great magic trick, but it does take a while to play out.