There are dozens of movies about aspiring singers and bands that are worthy for you to see. Some are set in a different time, many in a different place but most of them that work, have a heart. Earlier this year, we got a biopic of Elton John and it is terrific, I think however, from an emotional perspective at least, it has been surpassed by this Scottish tale of a woman who feels that she is in the wrong place but the right voice. I worry when I see superlatives being bandied about in the trailers, because they can set your expectation up for disappointment. No need to worry here, Jessie Buckley is all that has been advertised and I hope she is singing the Oscar nominated song on the Academy Awards, right before she picks up her own award. 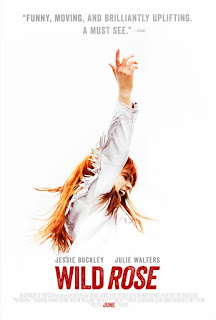 For forty years, I have asked students to share something about themselves in the first week of class. Overwhelmingly, one of the personal tidbits that gets dropped is their love for some kind of music. If I were to paraphrase a sentence that I heard nearly a half dozen times every semester it would be..."I like all kinds of music...except country". Now there are plenty of students who did love country music, but I always found it fascinating how many try to distance themselves from an art form that seems so accessible to me. Maybe they subscribe to the stereotypes of the old songs, and don't want to be seen as morose or too conventional. This is the sort of film that ought to convince them to see and listen to the world a bit differently. Country music as it is portrayed here is not dull, and it certainly applies to a youth culture as much if not more than an older generation.

Two films jumped into my head as I was watching this, "The Commitments" and "Sing Street". Both featured music but very different kinds of music. Each story has a different theme, friendship, love, responsibility. Despite these difference, you may notice the story beats are very similar. After we are introduced to the characters, they reveal how talented they are, they overcome initial obstacles, they fail at the next obstacle, but ultimately redeem themselves with the promise of a future obstacle that they will be well equipped to manage. All stories will have some of these types of cliches, it's unavoidable in fictional storytelling, these are the dramatic turns that make us follow the events. A movie succeeds when it makes these cliches feel real and presents them in a dramatically fulfilling manner. "Wild Rose" manages to do this just fine.

Rose as played by Jessie Buckley, is a headstrong woman who has great talent and ambition but has also made some bad decisions and lacks a sense of responsibility. She needs to grow up. The question concerns how she will manage to do that. Can she be the person she needs to be for her family, and still be the person she wants to be for herself? That is a question that all of us have to answer and it does not always turn out well. We can see that Rose wants to do right, but she does not know how to. She has the raw talent to succeed but lacks the discipline to make things work out the way she wants. Along the way she has a couple of allies and she doesn't realize how much they want her to do the right things as well. Sophie Okenedo is a sympathetic employer who is moved by the music and the passion that Rose shares. Julie Walters is the Mother who wants her daughter to grow up and be the person she is capable of being, but she is tired of being an enabler for the bad choices her daughter is making.

The music is amazing in this film. Of course there are a variety of country standards and some obscure songs that pre-date the film, but there are a number of original songs written for the film, and all of the ones performed by Rose in the film were recorded by Jessie Buckley who has an amazing voice.


This will be on my end of the year list. Three chords and the truth.

Posted by Richard Kirkham at 12:20 PM