As you can see, the fanatics were out last night to see the movie that many of us contend is the greatest film of all time. There were a lot of enthusiasts and a fine time was had by all with a brief interlude.

Every time I see Jaws,  which is usually three or four times a year, I pick up a little something extra. Last night for instance, I noticed the floral style center piece on Ellen Brody's dining room table for the very first time.

The screening was an actual 35 mm print, struck from a wet gate negative [whatever that means] and frankly, it looked spectacular. The sound in a theater is also impressive and you can catch snippets of dialogue in the background that will be mostly lost even with a sophisticated home theater set up.

Nothing has changed in my evaluation of the film. It is Spielberg's greatest accomplishment, even with the somewhat limited practical effects of the mechanical shark. Ben Gardner still manages to make me jump, even if it has happened a hundred times before, I'm not kidding, this is the film I have seen the most in my life and it is at a minimum a hundred times.

The brief interlude I mentioned before was the 7.1 Earthquake that happened in Southern California last night. Just as Hooper is arriving at the Brody residence for dinner, the Earth moved substantially. 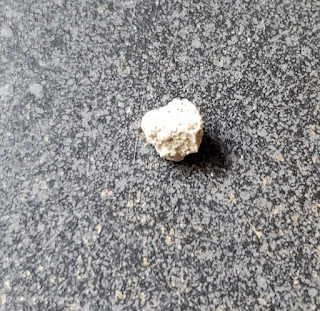 The above is a small piece of plaster that fell from the ceiling on me during the quake. I did not see any big chunks, just some flakes here and there, this is maybe a 1/4 of an inch in size.

A few people got up and left the auditorium for a few minutes, most of us just covered our heads and rode it out. The projectionist stopped the film, rolled it back to the start of the scene, and after a ten minute break for us to collect our thoughts, the film started again. Still the biggest cheers in the audience were for Quint's entrance at the council meeting and his exit from the Orca. The movie continues to work.

Before the film ran, the Cinematique played a bunch of Jaws related material, including trailers for all the sequels, several inferior knock offs, and some ads that used shark themed concepts to sell products from both 1975 and 2019. We also got a Baby Shark Sing along video.

I had never heard of this movie before, and I was only vaguely aware of Writer/Director Andy Sidaris, but now having experienced it, I am a fan. It is as cheesy as the trailer suggests and just as entertaining. Everybody seems to be having fun making this ridiculous secret agent film. Come on, it's not enough that the snake is venomous, but it is also contaminated with chemicals fro cancer ridden rats that it ate.

Star Dona Spier was present to introduce the film and she signed books before the movie. I wish I'd gone out and bought one and had it signed, but not having seen the film I was hesitant. Now I will just live with regret. Also present was Arlene Sidaris, the producer of this movie and widow of the legendary film maker. She had some nice words about the movie and they introduced one of the behind the scenes tech crew who was in attendance at the screening.

This film is not politically correct in anyway. Andy Sidaris lampoons his previous role as a Wide World of Sports director, with the most insane interview of a quarterback you are likely to see on screen, and it has nothing to do with the story, it's just funny in a pre-social justice world perspective.

Gloriously insane characters and hilariously awkward dialogue make this a must see for fans of cheepo action films. Unfortunately it has already been covered on "Exploding Helicopter" , I wish I had been the one to join Will in talking about it. 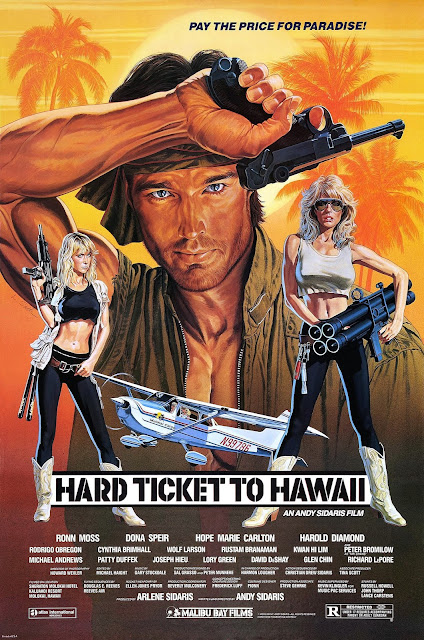 Posted by Richard Kirkham at 1:22 PM