As is tradition on this site and in our house, when "Lawrence of Arabia" is available on the big screen, we are available to see it. Having sat through an earthquake the previous night to watch "Jaws", nothing was likely to disturb us from spending time with David Lean's masterpiece.

I have written about this film a number of times. There is a link here to a video blog for a screening in 2013. Here is a link to a screening at the Cinerama Dome. At this spot you can read about our visit two years ago, seeing the print that was run on Saturday. Finally, there was a post I did on the many versions of Lawrence that I own on home video and some other tidbits.

The term Fan is derived from the word fanatic, so maybe this is an apt description of us and our love for this movie. For this post, I thought I'd try a perspective suggested by the author of the beautiful coffee table book that came with the blu ray package. Jeremy Arnold was at our screening, and he was there previously when the American Cinematique introduced the 70mm print that they now own and lovingly care for. His introduction talked about the enigma of T.E. Lawrence but also of the film about him. He said that there are many ways to experience the movie and some people never get past the sensory. So what I will do here is approach three of those paths, and hopefully find some interesting things to highlight about the movie.

I think it is fitting to start with the sensory, since it is the major selling point of the film for most cinema fans. "Lawrence of Arabia" is one of the most visually splendid  stories ever committed to celluloid.  The opening titles are shot from a static position overhead as Lawrence readies his motorbike for that last fateful trip. You might think a static shot of a mundane activity would be boring after a few seconds, but the lighting, the colors and the music make it compelling and the angle gives us enough to see what is happening but it still keeps the central figure as a mystery. Ultimately, the film is about the mystery of T.E. Lawrence and this simply foreshadows the whole point of the picture.

Everywhere you look in the rest of the movie are fascinating landscapes, revealing face profiles, and composition of shots that even an amateur like me can recognize as spectacular. The famous edit by Lean and Anne V. Coates, moving from a lighted match to a sunrise over a harsh desert, continues to inspire no matter how many times you see it. Omar Sharif's slow reveal as a distant figure in a landscape is also iconic. Even watching Lawrence brood over a problem, under the night sky while silently being trailed by the two boys who become his servants for the crossing of the desert later, is compelling to watch. The sensory experience is added to by the music at every point. The score by Maurice Jarre is like an earworm that is soft at times and thundering in the right spot. Listening to the tentpoles in King Faisal's tent,creak as the winds of the desert cause the tent to shift slightly, illustrate the way that sound adds to the sensory experience in subtle ways as well as the obvious explosions and thundering hoofs.

Everyone can experience these things for themselves and if you pay enough attention you will find hundreds more of those moments in the movie. The emotional reaction to the film is a second path by which to experience it, and Lawrence provides a banquet of emotional moments to satisfy all palates. Humor is everywhere in the movie, although no one would describe it as a comedy. Lawrence is introduced to us in the British Military headquarters in Cairo, referring to each of his fellow soldiers by both their first and last names, spoken in a deliberate manner meant to exaggerate his mannerisms. It is not a joke but it is a funny way to learn how he speaks and thinks without having to have exposition. There is an abundance of visual humor in the film as well. We all laugh when we realize that the reason he is admiring the knife that is part of his new regalia, is not simply that it is new and unique, it is that he can see himself in the reflection and his vanity is revealed accidentally.

Lawrence's proximity to death is all the more tragic because of the three deaths he is most closely associated with in the film. In the screening on Saturday, Jeremy Arnold surveyed the packed house to see how many we experiencing Lawrence for the first time. Amazingly, nearly half the audience raised their hand to indicate that this was their maiden experience with the movie. I know they were not lying because when it is revealed who it is that Lawrence must execute to keep the tribes from warring with each other rather than the Turks, there was a loud collective gasp from the audience. When Daud is lost to the desert sands, there were some sobs that were audible, and when Lawrence has to end the life of his other associate after an explosives accident, the silence of shock and dread hangs in the air.

Emotional jubilation is also present in the film, as Lawrence rescues Gasim from the desert, or as a bunch of grapes from Damascus are delivered and we know that success is in his grasp. Of course all of these points have a counterpoint and the movie is never short on finding ways to emotionally evoke a response from us. We will feel disgust as the clammy hands of the Turkish Bey examine the fair skin of Lawrence when he is about to be tortured. Anger and hatred  will also come to our hearts when we see the village left behind a retreating Turkish column, or the grin in the face of the man holding Lawrence's hands down as the beating begins. There is such an overload of emotional moments in the film that I'm sure a whole book could be composed to cover it, and you would still only scratch the surface.

The last trail suggested by Mr. Arnold's introduction, is the intellectual/spiritual path that the film takes in telling Lawrence's story. He was a passionate man who also knew to control that passion in pursuit of his vision of an independent Arabia. We can't tell if he is motivated by his admiration of the Arab people or his disdain for some elements of their culture. He embraced the life of the Bedouin and rejected it simultaneously.  He was clever and boldly foolish. In other words, his life was a variety of dichotomies that make him even more enigmatic than before we have seen the film. His vision of a future for the Middle east was at variance with those of his country, but also with those whom he lead and loved.

He defied the conventional wisdom of the Arabs, "Nothing is written", but also repeatedly proved that their fatalism was well earned. From the beginning, he was described by people at his funeral as the most extraordinary man they ever knew, but there was always a hedge statement that followed, which revealed that no one was quite certain how to classify him. The intellectual puzzle that he was is not really solved by this movie, but it's attractiveness and magnetism is intensified by the film. Once again, I am in awe of the scope of this movie, not simply as a piece of cinema, but as an historical mediation on a figure that rode the whirlwind of history. 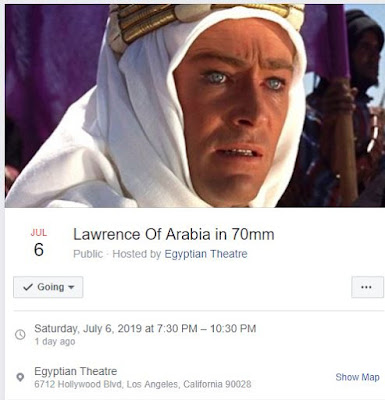 And let's just add that the lead performance is responsible for much of the success that those three paths managed to get us through. Peter O'Toole makes all of it feel accurate, and real, regardless of where the truth lies.

Posted by Richard Kirkham at 10:44 AM