There is a lot to admire in this film. The performances are excellent, the story is compelling, and it is beautifully shot. There are several reservations that I have with the film and they are likely to be director's choices. The movie is deliberately paced. The music is designed to emphasize the pacing, and there needs to be a little more of a point of view as to what is going on. I know it is based on real events, but the subjects that get focused on never stay targets for long.

Everybody is talking about Steve Carrell in this part and we should begin there. I have always thought that he was a solid actor and I have seen some films where he is not a very nice character. Best known for his comedic roles, he is of course getting acclaim by stepping out of that comfort zone. I thought his desperate turn as a cuckold husband in "Crazy, Stupid, Love" was effective enough to show his acting chops, but because it was a comedy based drama, he got a little overlooked.  This film will not be mistaken as a comedy. Channing Tatum and Steve Carrell smile like twice in the two plus hours this movie runs.  Carrell's main technique is to keep his face impassive for 90% of the story and to keep his chin and nose up in the air. It feels a little mannered, but along with the make-up work it is an amazing transformation.

Tatum also has a surly expression for most of the film. In fact as a character, we know that there is something wrong with him when his look is relaxed and easy going. The story takes several turns that allow him to  show off something other than his dance skills and physical training. I could have lived in ignorant bliss without having to watch the vomiting that takes place at a dramatic turning point for the three main characters. Everyone else is getting attention but it is his character that is the center of the story and he acquits himself very well.

Once again, Mark Ruffalo shows why he is a splendid addition to almost any movie. His natural ebullience is kept in check and his usual low key manner fits the character he is playing perfectly. His best scene is an awkward moment recording a short interview piece for a documentary produced by the would be coach and millionaire played by Carrell. His character, David, struggles with the words he needs to say what is in his heart about John du Pont. Ultimately his in-articulation may be the straw that breaks the camel's back in the story. We know that there is something not quite right about the millionaire wannabe wrestling coach, and we spend two hours waiting for the eruption. When it occurs, it is sadly sudden and mundane in spite of our horror at what took place.

Sometimes the movie seems to be about the emptiness of du Pont's life. For long periods it looks like the film is going to focus on sibling rivalry that is secretly felt. I guess that the truth is that the film maker's want us to know that our unstable rich guy had mommy issues but without her presence, he has no anchor to keep him from drifting off. I certainly hope that the message was not to suggest that the values the killer espoused were insincere or wrong. They represent the one thing about du Pont that makes him less of a monster. His needy narcissism is what lead to the tragedy, not the desire for excellence and restoring values to the sports world. 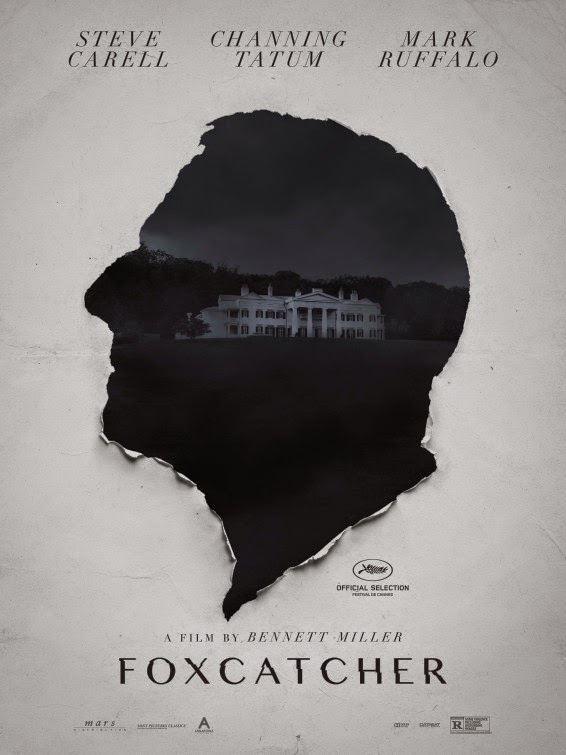 "Foxcatcher" will get many award mentions but it is not a film that reaches high enough to be "the Best". It is well made but as compelling as the story was, the lethargy it employs in it's telling makes it much less effective than it might have been outside of the performance categories.

Posted by Richard Kirkham at 11:25 PM