The Hobbit: The Battle of the Five Armies

This movie provides a very satisfactory conclusion to a trilogy that could easily have been a single long film. Despite the bloat and excess and labored weaving of the story here with the later "Lord of the Rings" films, fans of the children's adventure novel that this is based on will recognize much of what takes place. The visualizations are spectacular as is standard at this point and the action is furious.

The first correct step that Peter Jackson took in starting off the film was to return with Benedict Cumberbatch as the voice of Smaug (and Sauron). The tidbit of conversation that Smaug engages Bard the Bowman with, is a little extra touch to the character. There are also some flashback scenes where he provides an ominous warning about the power of the dwarf's  gold to corrupt Thornin, much the way theRing of Power works on other beings in the story. This adds some of the gravitas that the series continually seeks in these new films. While such seriousness was the subject of the Rings trilogy, it has always felt as if it was being shoehorned onto the current project. At least in some spots like this, it feels like it fits rather than cramping our toes into a narrow pont.

It would be an easy warning to anyone who is not interested in long sequences of warfare, to simply point to the title and ward them off that way. This movie revels in the variety of dismemberment and violence the sides can bring to one another. Be-headings, sword penetrations, skulls being crushed all roll across the screen on multiple occasions, sometimes with sweeping moments of slo-motion photography to bring it all home. Many times it is accompanied by the quick cutting shaky cam process we have seen in so many other films. The grandeur of some of those sequences demands it. As Legolas stands off against the major domo of the white orc Azog, Bolg, there are arrows flying and swords crossing against a mountain backdrop and a crumbling castle tower that looks incredible and does defy the laws of physics but works anyway. It's not clear why there is a frozen pond for Thornin and Azog to navigate through their fight but it adds some tension and fills the movie with a series of multiple climaxes.

Bilbo, as he did in the book, mostly gets lost in the crowded battlefield but did have his chances to shine as a character. His decision on the Arkenstone is clearly conveyed and his conflicted loyalty is shown to be motivated by the right instincts. Thorin's redemption is a lot more appropriate in this film than it might have been in a short version of the movie. It is a little histrionic but that builds the climax of full engagement on the battlefield so I could accept it.  The romance between Kili and Tauriel is effective even if it is part of the extra stuffing the movie does not really need.

I had to remind myself that Christopher Lee is 92, but then I also had to remind myself that most of his appearance is CG enhanced combat so it is not quite as impressive as it would seem. Still he holds the screen when he is on, although the sequence with Cate Blanchet and Hugo Weaving feels like an out take from "Return of the King". When Billy Connelly's voice boomed over the speakers we all had a good laugh and cheered, he brought a little more of the charm of the novel with him. Once again, most of the Dwarfs get short shrift but there are also some excellent scenes for the four or so who do get a little more screen time. 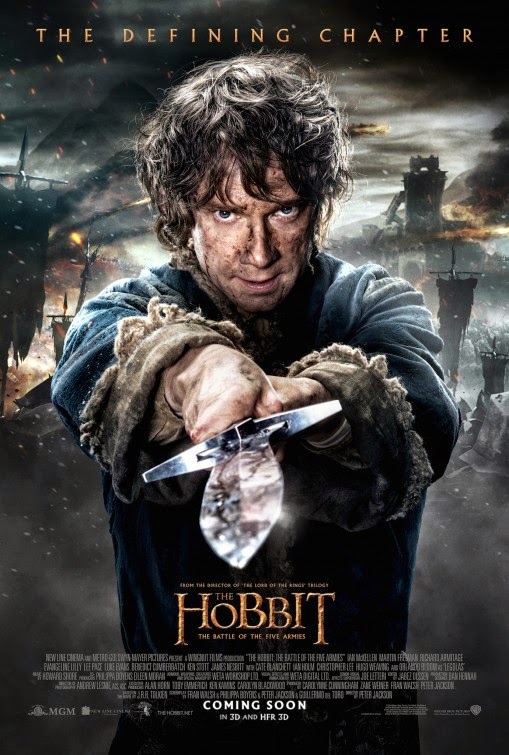 I've said it before in the other two reviews in this series, someone will cut all of this material together into a coherent two and a half hour film, and we will see something like what J.R.R.Tolkien had in mind. For now we can wallow in the excess and glory of Peter Jackson's version of the story. A fitting end to our time in Middle Earth.