Hector and the Search for Happiness

If you saw the Ben Stiller version of "The Secret Life of Walter Mitty", you will find yourself experiencing a strong sense of deja vu when watching this film. The concept is very much the same. A man who leads a good but maybe not fulfilling life, sets out to discover what is missing. It involves a lot of world travel and adventures and ultimately it leads back to love. I do want to give a shout out to the AMC Stubbs program for providing a coupon for two free tickets. Word of mouth will probably not turn this into a huge hit, but the offer did a good job filling up a theater for an early afternoon screening.

Simon Pegg has been in some of my favorite films in the last few years. He is comic genius in the Star Trek films and also Mission Impossible series. He is also the lead in the so called "Cornetto Triliogy" of "Shaun of the Dead", "Hot Fuzz" and "The World's End". He is able to mix his low key humor with a certain amount of pathos and channel it well in this film in which he is the principle character and on which the film focuses for it's entirety.

The movie does not break any ground but it is shot in some nice creative ways. There is a subtle use of animation for transitions between the episodes and the camera usually holds steady instead of floating around as it did in the Walter Mitty film. A combination of video screens, skype, CCTV also add a little bit of creativity to the way the movie is told. However, the movie is a very straight drama with some big slices of humor and there is nothing too surprising in any of it.

Hector's trip to China starts things rolling with a canard that everyone will be familiar with, befriending a lonely rich guy. Hector being naive in the world does not see the twist in his story that we see coming. His take on love ends up being sadder than he expected, but exactly what we expect. The most mundane part of the film involves his seeking enlightenment at a monastery in the lower Himalayas. This section has one of the two best jokes in the film, let's just say, check your calender before you climb the mountain. The most surprising section of the film involves his time in Africa, where he goes from supreme satisfaction, to fear, joy terror and joy again. The shortest segment and the one that works the best actually takes place on a plane. Even though the idea seems to be a stretch, it plays as the most thoughtful moments in the film. 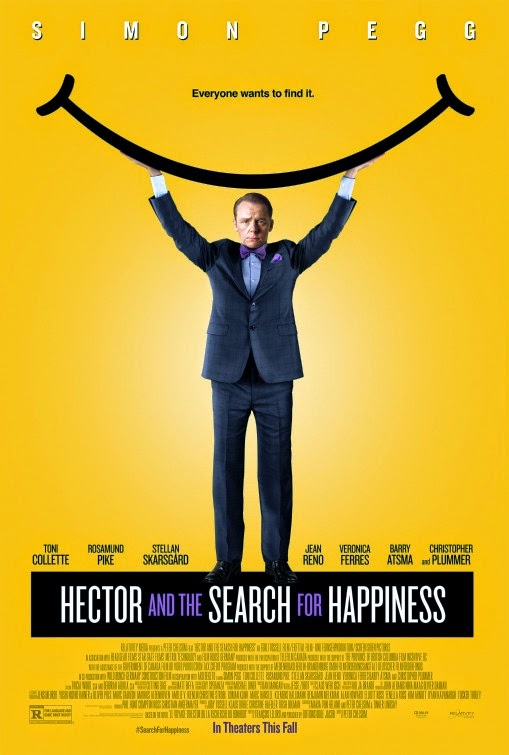 The cast is full of names and faces that you will recognize.   Stellan Skarsgard is a banker, Jean Reno a drug lord, Toni Collette a lost love and Christopher Plummer is a fellow psychiatrist studying the same issue as Hector but with a very different approach.  Rosamund Pike is Hector's long suffering girl friend and she is lovely as usual but not nearly as compelling as she was in her other film this fall, "Gone Girl". The platitudes are nicely revealed and undermined and then confirmed as the story demands. It will leave you mostly satisfied, although not nearly as nourished as you would hope.


Posted by Richard Kirkham at 6:24 PM