For seven weeks now I have avoided reading any reviews of this film because I wanted to experience it with a clear and open mind. This would usually have been a film that would have been an opening night must for me, but circumstances have put it off for a substantial period. I can now add my two cents to the discussion, although at this point most of you will have formed your own opinions. "Interstellar" is maybe the most ambitious, intelligent and creative science fiction films made in the last fifty years. It has no fantasy elements to it, and it is deeply seated in the hard science realm of quantum physics, but it is more than anything a story about human beings rather than technology.

The Nolan brothers have a pretty clear opinion on how our science dollars are spent. The idea that short term objectives should take precedence over long term goals is an anathema to them. An early scene at young Murphy Cooper's school tells us exactly what foolishness comes from being narrow focused. It also shows how dangerous the conspiracy theories that thrive on the internet are. There is also a healthy bit of skepticism concerning federalization of the education process. Almost none of this is important to the plot but it is essential to the sensibilities of the film maker. This is a "can do" civilization and we need to keep that belief in something greater alive.

A seemingly terminal malaise has settled over the Earth as blight is decimating agriculture and the population of the planet has been diminished by a variety of  circumstances. Matthew McConaughey is Cooper, an engineer and former NASA pilot who has been relegated to the role of farmer, as has most of the world in trying to cope with massive famine. He and his ten year old daughter Murph, discover an anomaly with gravity that leads them to a secret plan to save civilization in one form or another. The team is lead by another father/daughter combination physicist Professor Brand, Nolan regular Michael Caine, and his daughter played by Anne Hathaway. They need Cooper to lead an expedition to a different star system that is being explored for habitable planets. Of the dozen scout ships sent forth only three appear to have survived and found somewhere promising. Because travel through a worm hole in space allows them to reach those destinations in relatively short times on a human scale, the passage of time on Earth will be longer and Cooper's family will grow old before he will ever make it back. This is the point where most of us who have only a passing knowledge of science need to have some exposition. The pacing of the first act is leisurely with a building sense of dread. Once the mission starts, there are some pauses in the action to bring everyone up to speed on the physics. This becomes a time travel story in the sense that different groups will be experiencing time in different ways during the course of the story. I'm sure there are experts out there who will nit pick the science here the way that was done for "Gravity" last year.  As a viewer of the film, I felt sufficiently informed to be able to follow the ideas up through the climax of the film. Once we arrive at the final explanation, I did feel a little lost, even though I could follow the story line. The pace of the movie picks up and with that urgency, the exposition becomes more visual in nature and as a consequence more abstract.

We are told early on that love is the only thing other than time and gravity that transcends space. The purpose of this movie is to show that this is true. Cooper undertakes this mission reluctantly because he sees it is the only possibility of saving his family. Saving humanity matters of course but it is the survival instinct and the love of one's children that drive us to reach a little further. It is a theory that is expounded upon by a late arriving character in the story. It is also told under harrowing and unpleasant circumstances, but it is nevertheless true as Cooper will reveal. The complexity of love and the ability of that emotions to drive our actions is front and center in the story and it usually makes sense. There are some places where the story telling depends on withholding love and then letting love solve a puzzle that don't always work but they still seem to be honest ideas.

In many ways this film is a counter weight to "2001: A Space Odyssey". Kubrick's view of space travel and human evolution is cold and calculating. In that story we seek knowledge because of our intellect, here we are doing the same thing out of desperation. In "2001" it is the machine that betrays us, in "Interstellar" the betrayals are human in nature. The Discovery travels through space without contact on another planet, The Endurance travels through time and space, encountering planets and other explorers in attempting to seed another galaxy. "Space Odyssey" begins at the dawn of man, "Interstellar" begins at what appears to be man's sunset. The psychedelic trip though time in 1968 was a metaphysical journey without any clear explanations, a similar event in the current film is all explanation (although admittedly not well understood). Human evolution in the Arthur C. Clarke story is a result of extraterrestrial intelligence intervening to make it possible, the Nolan brothers have the audacity to believe that human beings might be the ones who are responsible for our own advances. Both stories feature artificial intelligence in the form of on board computer systems, but "Interstellar" makes those characters, mobile and warm. The idea of sacrificing a computer is objectionable to Brand when faced with the need, because of the personification of TARS. Dave and Frank pay lip service (get it?) to HAL being a member of the team, but TARS and CASE participate in the actions and behave as team members, even to the point of making a "2001" joke.

Christopher Nolan is nothing if not ambitious. This is a story with creativity grounded in science. A fantasy writer can invent any kind of planet and populate it with whatever creatures they choose. "Avatar" is a good example. James Cameron makes dragons and tigers and bears of a different sort. Nolan has to conceptualize two worlds  for the explorers to visit that need to seem realistic and dangerous. Neither of the two planets is very hospitable to humans but not because the indigenous life forms are going to eat us. The ecosystems of the two worlds just are not going to work for human habitation. The water laden planet that absorbs so much of the time for our team is actually spectacular to look at and to contemplate. The frozen world that hides a secret is equally well conceived and  even more believable. Neither one will take us out of the science based story that we are in, they reflect the realities of our choices much more.

The human dangers are the one place where there might be some questions about the story telling. There are two different acts of humans that are questionable from a moral standpoint. I don't want to give away anything that could be a reason for suspense or emotional surprise to the audience but I will say that both of these choices seemed questionable to me. in a longer film, the ideas might be the basis for discussion and the central focus or theme of the picture, in this context they feel a little too much like plot bridges to create drama. They work, but they may do so at the expense of the heart of the real story here. 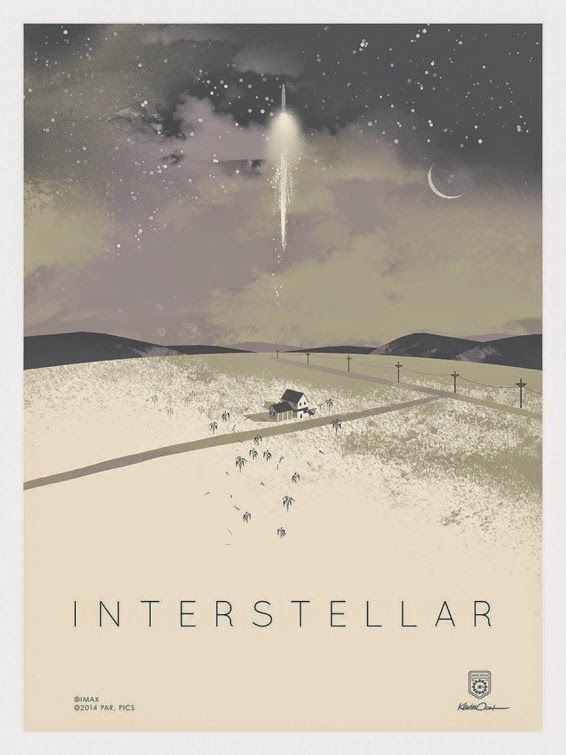 Cooper frequently jokes with the mechanical members of the crew over their honesty and humor settings. He turns them up or down as necessity dictates. Using a similar measurement, this film is near a ninety-five percent on the creativity and thoughtfulness scale and only slightly lower, say ninety percent on a story telling standard. The actors are all excellent and the cast is really filled with people who know what they are doing. A couple of the performers play against type and do well. Hathaway and McConaughey are the show and I thought they were both effective at conveying the characters, especially at moments of emotional depth. Jessica Chastain is usually excellent, here she was merely satisfactory, having been cast in the most thankless role in the film. Young Mackenzie Foy is the brightest spark in the movie although her character's truculence is a bit off putting, you can easily believe her intelligence. "Interstellar" was a wonderful experience and a great intellectual challenge that is carried off with authority.
Posted by Richard Kirkham at 10:08 AM