When I first saw the trailer/interview preview for this movie almost a year ago, I made a bold prediction that it would be the Oscar winner for Best picture this year. I can't withdraw that prediction completely because the story of Louis Zamperini is still as inspiring as ever and the movie is very competently put together. There is however something missing from the film and as a result it does not live up to my lofty expectations. While it remains one of the few films this year to attempt to tell an adult story with an inspiring message, it is only in the last few minutes of the movie, when the coda of Zamerini's life is given to us that the emotions match the story.

The film touches on many of the key moments that make the story extraordinarily, but it misses a few moments that are also important in tone and spirit of the subject's life. The first thing I noticed was the lack of background on his friendship with fellow survivor and pilot Phil Phillips. Their earlier close call is shown but the relationship between them is hinted at rather than featured. The sequence by which they ended up in the plane they eventually crashed in does little to show how the flyers felt about the weapons that were being produced and the sense of fate that often accompanied their flights. The decision to tell the story as a series of flashbacks in the first half of the movie makes sense. An hour on the two rafts in the ocean without some relief would make the story feel slow. The structure robs the narrative of the drive and promise that Louis had as he climbed the ladder of track and field royalty and as the intervention of service in the military changed all of that. Not to mention that it left out entirely his time at U.S.C. where he encountered a Japanese student who would later come back into the story. All of the cuts are made to keep focus on the endurance of the survival story but it leaves that story without the emotional context it needs. The childhood thuggery was displaced by the sports enthusiasm but even that could not suppress the mischievous nature that Louis had, a nature that lead to a confrontation during the Olympics with his theft of a Nazi flag.

The most successful sequence in the film concerns the crash of the plane and the extraordinary survival story on the rafts. The forty five days depicted here are replete with harrowing moments of physical threat from man and nature as well as the despair that anyone in those circumstances is likely to face. The crash itself is a piece of technical film making that rivals the special effects in large action pictures but is so much more meaningful because it depicts a reality rather than the fanciful. It does not involves elves and orcs dancing across a chasm over a collapsing tower. That fanciful image can be put together in a number of ways because it is a fiction. The B-24 crash that killed eight of the eleven crew members has to ring true and it does. The unpleasant six weeks that followed is visualized with accuracy, probably a combination of make-up special effects and acting talent. The interaction of the men as they cope with mind numbing tedium and spirit crushing fear was nicely detailed in small exchanges and moments. Those who have read the book know how they trio wondered at their ability to survive after breaking the 24 day record for being adrift at sea set by Eddie Rickenbacker and crew the year before. The degree of exposure, dehydration and malnutrition is had to imagine. All of this ends up being a prelude to the elements of the movie that Director Angelina Jolie, and the screen writers choose to focus on, the internment in the Japanese prison camps.

The malicious nature of the captors is well portrayed by Japanese musician/actor Takamasa Ishihara. "The Bird" as he was known by the P.O.W.s , had a sadistic nature that made him a sought after war criminal once the hostilities ended. The suffering that Zamperini especially endured at his hands makes the later story of Louis forgiveness and redemption more meaningful. The film however summarizes all of that in  some post script title cards rather than taking time to show us that transformation. Actor Jack O'Connell has to portray the physical strength and power of endurance that Zamperini displays but never gets much of a chance to connect with the spiritual. Emaciated, tortured, worked to near extinction, the body work is evident but the spirit is only shown in those contexts where abuse provokes it. The result is that the movie feels like a more brutal version of "Bridge on the River Kwai" or "King Rat" rather than the spiritual journey that the history really reflects. Domhnall Gleeson's Phil disappears from the story and the religious seeds that he plants are not show to sprout much in the duration of the war. 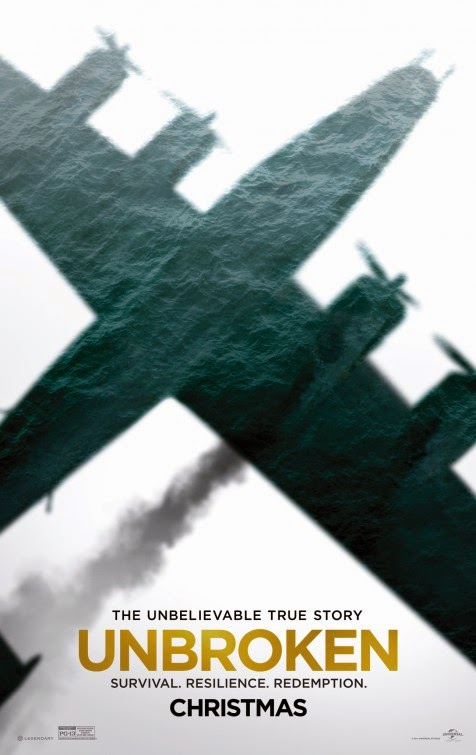 I suspect that the movie will be criticized by others for the same reasons I've made, regarding the film that it is not rather than the one that is given to us. There is so much promise in the way the movie is visualized and acted that it feels a shame that the ultimate emotional point only occurs when we see the real Louis Zamperini in some clips at the end . As a matter of heroism, "Unbroken" feels rich and well developed. The circumstances are set up and depicted with real honesty, it simply does not connect the way that the real historical figure managed to do with his own words and deeds.

Posted by Richard Kirkham at 10:37 PM