If anything in the following commentary makes any sense it will be something of a miracle. I'm writing this after seeing the film at an 11 pm screening, I did not get to bed until 2 am, and I woke up at my usual start time, 5:15 am. Basically, I'm cruising on left over adrenaline from the film, and that is a pretty good thing because the movie did get the juices going. The fuzziness will melt away as the day goes on, or else there will be a lot of confused people for the next 12 hours. The easiest way to put this is that the movie is very entertaing, and there are enough plot spoilers that I will have to be careful what I discuss. I deeply loved and admired the J.J. Abrams reboot of Star Trek from 2009. In my opinion it was the best film of that year. "Star Trek Into Darkness" will probably not earn that moniker by the end of 2013, but it is a nearly great film, and so far the most entertaining film of the year.

The renewed crew of the Enterprise is sent on a secret mission to destroy a terrorist named John Harrison. The film begins with a completely unrelated action sequence, but it does set up some of the capabilities of the crew and reminds us of what an amazing ship the Enterprise is. There are two dramatic attacks by Harrison that set up the goal. In one of those attacks, Captain Kirk thwarts Harrison's objective and he develops a strong motivation to see the terrorist brought to justice. The original Star Trek was a show about ideas first and action was a sideline. The new films recognize that deep philosophical discussions by the principles are not going to bring in an audience every few years for a movie. So the ethical and moral stakes that are behind the actions are often hidden or hinted at. There is only one scene where there is an outright focus on those kinds of moral judgments, and when it happens, you will be proud of the stubbornness of a certain Scottish engineer. It turns out that if he did not choose the path he travels, the rest of the plot and the crew of the Enterprise would not be making it out of this film.

The relationship between Kirk and Spock is a more complex one in this new story dimension. Remember, this is a tentative friendship based on a limited amount of time. The jocular teasing that Shatner's Kirk gave to Spock is repeated here, but the bonds of the friendship have not been tested much. This movie, despite all the action, and the political intrigue, and the plot line featuring the villain, is really about the nature of Kirk and Spock's friendship. Each has expectations of the other and each is going to be disappointed early on in the story. Ultimately, the relationship is tested in a reversal of roles from the original Star Trek films plot lines. The way this is visualized and the touchstone nods to the original cast and past epic events is very well managed. Long time trekkers like me are going to laugh and cry over the spin that Abrams and the screen writing team have put together to entertain us. Those who are new to Trek may miss the echos from the other time line of stories, but they will still enjoy the resolution of those plot threads. And while all of that is happening, stuff crashes into the Earth, battles rage, fistfights against intimidating opponents and love stories, all wash over us. It takes a little while for the movie to get it's sea legs, but once the action moves to the Klingon home world of Kronos, the film hits it's stride and the dramatic events feel a lot more synchronized than they do in the first third of the film.

Benedict Cumberbatch plays the mysterious and extremely dangerous Harrison.  This character turns out to be a lot more complex than we are originally lead to believe, although the fan community probably feels they have everything figured out ahead of time. When I was younger I sought out every piece of information I could find on upcoming films, I wanted to be an insider. These days I try to keep the spoiler information to a minimum, because I want the movie experience to be what seeing the film is all about. There will definitely be expectations about what takes place if too much is revealed about Cumberbatch's character. He has a passive but menacing face that suggests indifference to human concerns. His voice operates in a very controlled range but with enough inflection to convey ideas and feelings. At the end of the year, it is that voice that will largely determine how i feel about the second Hobbit film, because he is the voice of Smaug, the dragon. Peter Weller brings his talents to the film as well. He plays a politically astute Admiral in Star fleet, who sends Kirk on his mission, and he has an agenda as mystifying as Harrisons. The parallel universe in this Star Trek series means that characters from the other timeline will be a part of the story but that their paths may not always play out in the same ways. I was happy to see a new character introduced to this timeline, and she may be a key figure in future Star Trek stories. 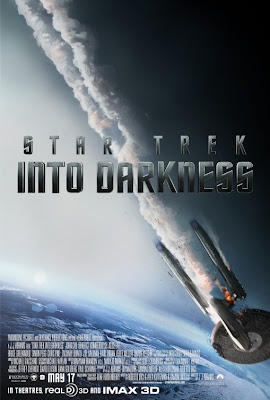 If you hated J.J. Abrams predilection for camera flare before, get ready to have your head explode because he goes overboard on those shots in this film. The camera is very active in the action scenes but I did not experience any of the nausea that usually comes with "shaky cam" techniques. The scenes of gravity induced panic and upheaval are well staged and the camera manages to follow events pretty well. Zachary Quinto and Chris Pine play their big scene just right toward the climax of the film. It carries the emotional wallop that you want a Star Trek film to contain. All of the usual characters get a moment or two to shine. Simon Pegg especially as Scotty, since his plot elements end up turning the tables at a key moment. I do feel that some elements don't quite gel in the first hour. There are some scenes that go on a while longer than necessary and the comradeship between the characters on the Enterprise is still taking it's time to develop, but i really want to get to the next movie to see how all of that is going to happen. Star Trek Into Darkness feels like the first act in a play that you want to move forward in so you can see what happens next.
Posted by Richard Kirkham at 8:07 AM

"He has a passive but menacing face that suggests indifference to human concerns" It's that passiveness that got to me, I think. I mean, I cant complain about his role here, but I cant rave about it either. I was actually much more impressed with Weller, who gave a less... stoic turn.

It probably is the movie of the year at this point, but I dont expect that to last long either. I liked it, but its not without its big budget action film stereotypical flaws. ;)

Thanks Dan, I have a couple of comments for your review when I get back there.