This is supposedly one of the seminal films of the 1970s golden age. It is directed by one of the darlings of the cinema world, Arthur Penn and it stars Gene Hackman. There is much to admire about it and it clearly fits into the oeuvre of Los Angeles based detective stories. Coming as it does a year after the great Chinatown, it loses a lot of it's emotional wallop because so much of the territory has been covered before, and so recently and frankly more effectively. This is the story of a private detective, in over his head, who is too good at what he does to let things just go on the way they are. There is a moral center to the protagonist that is missing in so many of the other characters in the story.

My kids tease me about having a mancrush on Paul Rudd because I have liked so many of his movies. If that is the standard for a mancrush, then I have a guy obsession with Gene Hackman, because I believe he is the finest actor that was working in my lifetime. Hackman played tough guys, and cads, and ineffectual with equal dexterity. Unlike Jack Nicolson, another great actor of our times, Hackman (with the exception of the Superman movies) rarely took the showcase roles. He was always the best character actor playing a leading man part that you could find. When he wasn't the lead, he made everyone else look better, because he was a supporting player that lent realism to the proceedings. In Night Moves, he plays the lead, and it is one of the few times he is supposed to have a romantic angle in the film. As great a performer as he was, he was not the chiseled hero type, or the ethnic looking exotic that dominated these seventies films. Hackman is an everyman, a nice looking but not handsome performer, who knows how to convey emotions with his face and posture and voice. Here he is supposed to be a former NFL defensive back, that has retired from the game and moved onto private investigation. His wife wants him to do something more stable, and she believes more meaningful, but he likes what he does and is good at it. 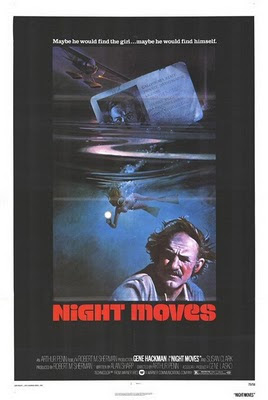 The story involves looking for a missing girl and the connections he follows lead him through the film making business and some criminal entanglements. He actually finds the girl early in the picture, but that is just the set up for the real mysteries that begin to unfold. Once the string starts coming loose, all the facts that he has encountered start meaning different things then he originally thought. Some of the follow up is a little confusing. The link between a later murder and the events earlier in the picture are not as clear as they need to be. The motives of all of the characters are a lot murkier than we thought they were going to be. So murky in fact that I'm not sure I can explain how all of the events are connected. The script seems a lot more convoluted than Chinatown was, and the result is not a satisfying explanation of the preceding elements, but only another prism to look through. That may be the intention but it is not particularly appealing as a movie. I don't need to have a happy ending, but I would like to understand what I just witnessed if I am watching a mystery. The notion that some strings are left dangling works better in an experimental film, rather than a hard-boiled genre piece like this.

Two stars that are going to become big in the next dozen years show up in this movie. Melanie Griffin was really young when she played the part of the slutty and confused runaway that Hackman is seeking. She is nude so often in this movie, that at her age under current laws, there might be charges brought against the film makers. James Woods plays a creepy mechanic that may or may not have something to do with the murders, it is still hard to tell what was supposed to have happened. Jennifer Warren is a femme fatale, a woman that may have fallen in too deeply after drifting through some other unsavory messes in her life. She was in Slapshot with Paul Newman a year or two later, but has moved behind the camera for much of her later career. Edward Binns is another one of those character actors that you immediately recognize but have a hard time placing, he did mostly television but I did remember him as General Beedle Smith in Patton. Here he plays a stunt coordinator on a movie set, one that is involved with many of the characters in the mystery. 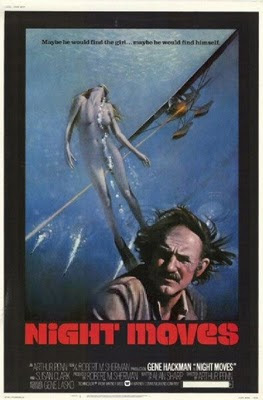 I saw this film when it came out and I am pretty sure I saw in in Westwood, but more than that I cannot remember. In fact, I recorded it on videotape in the mid-eighties and did not remember much of it then. Watching today, I was surprised at how little I remembered about the film. The most visually arresting shots in the movie are of planes underwater. One night shot was enhanced by the nude figure of Melanie Griffin swimming around a sunken plane with a dead guy in it. The fish eating at the dead flesh was also a little disturbing. The green hue from the underwater lights made the scene quite haunting. The second underwater shot of a plane was haunting for a different reason, we watch as the plane sinks to the bottom of the ocean, with a man struggling to get out as he slowly drowns. Both of those images are the things I recalled about the film before watching it again, the rest of the movie was a mystery for the third time that I saw it. Night Moves has a seventies sensibility, some good visual shots and great performances by a lot of character actors. Gene Hackman is great, but in this movie there is something wrong with his hair as well as the plot line.
Posted by Richard Kirkham at 3:27 PM