I picked this movie for today because I just heard from by best friend in college, Dan Hasegawa, and he is in town for a couple of days. We are going to have dinner with him tonight and catch up a bit. I have not seen Dan in 12 years or so and I have not talked with him for about 18 months. He and I saw a lot of movies together while we were both in college and even after I was married, we had time during the day to see films because I taught part-time at night. We saw this movie together when it first played in theaters back in 1976, we saw it on the big screen in Hollywood at the Egyptian Theater. I'm not sure why except sometimes Hollywood was the only place a film would play for a time so maybe we saw it early in it's run. It was promoted like an irreverent comedy with personality plus. I think that is a little misleading. There is quite a bit of humor but it is frequently offset by grim circumstances and some unpleasant characters. I did not care for it much when we first saw it and after today's viewing my position is only slightly less negative.

There are several things going for the movie that ought to make it sing a lot more. For instance it is set in Los Angeles, my city of choice for school and social activities, but you never get much sense of the place. The ambulance crews do not seem to work in one specific neighborhood or with any particular group of people. Part of the drama ends up being about how these guys need to function without feeling too much for the people that they cannot help. The problem with that is there is very little drama if everyone is detached. Harvey Kietel is third billed and his character is supposed to be a suspended police officer. At first it seems that he is the one that will bring some conscience to the group, but not much comes out of that. Bill Cosby is supposed to be the mother hen of the band of pirate ambulance drivers but there is very little to distinguish him from anyone else on the staff. He does not really come across as sympathetic. I loved Bill Cosby albums,and his stand up routine. As a comedian he is fine, but as an actor he just seems a little flat. Sometimes he mugs for the camera, but other then the familiar smart ass grin he gives in the funny scenes, his dramatic expression is blank faced. I think he worked on television better because as a weekly visitor to our homes we get a chance to know the quirks of the character and get used to the way he communicates. Here and in other movies, he just seems to be forcing it or underplaying so much that it doesn't work. His character is underwritten so that he can riff on the part, which should work for a comedian like him, but the story needs a bit more focus and he fails to provide it. 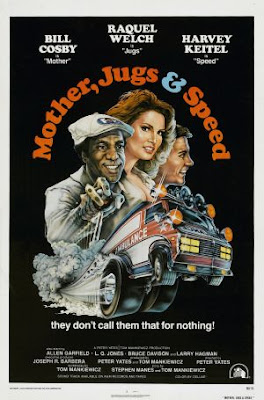 Raquel Welch was never a great actress, but she was good for the roles she was given. She is also lovely to look at but her moniker in this film is only hinted at, there are no sexy shots of her and she is pretty much playing it straight. As a crusading woman seeking equality in the workplace, the character is actually pretty representative of issues that women might have faced in the work environment. She has a love affair with Kietel that needs a little more development. He is almost wasted in the part, but he does have a couple of good scenes and the comic part he plays in Raquel's first ambulance chase is actually a strong motivation for her to overcome her previous ambivalence. Larry Hagman is in the film as a bad guy but he is supposed to be a comic bad guy. Unfortunately he turns out to be a rapist and a potential murderer under the influence of alcohol. He is actually the best performer in his role in the film, but it is not the lead, he disappears for most of the second act, and he is a lousy human being. I remember one thing from the first time I saw the movie that always disturbed me. Hagman basically sexually assaults a comatose coed in the back of the ambulance and it was sort of played for laughs, but I found it disgusting and it was one of the sad things about the movie that turned me off of it.

Bruce Davison from Willard and X-Men, is Mother's first partner, his story is over too quickly. Dick Butkiss is in the background of the movie but barely has any lines, none that are funny and he does nothing in the story. Allen Garfield, has been in a ton of stuff over the years, he was in the Candidate a couple of weeks ago. Here he is the owner of the ambulance company and he is sometimes funny, sometimes obnoxious and sometimes sympathetic. His opening take on the "Patton" type introduction is very effective and they used it in the trailers. L.Q. Jones plays a corrupt sheriff's officer that gets kickbacks for tipping off the ambulance company. He needs to have more to do in the story because there is a lot of charm in his voice and manner, but the part could have been done by anyone.

I hate to dump on Tom Mankiewicz, who we lost just a week ago and who Amanda and I saw last year at the Bond festival, but he is a producer and screenwriter for this movie and it is underwritten. The Director was Peter Yates who did "The Deep" that I wrote about a couple of weeks ago as well. This movie feels like a shaggy dog story that needed to be developed more as a dramatic piece and tightened when it came to the humor. The trailer makes it a much funnier film, so if the editor of the coming attractions can see what is worthwhile in the picture, it befuddles me why the screenwriter and director could not. The actors are a little lazy in their performances and the action is too random to keep us very interested. This is a movie that needed to decide what it wanted to be and then pushed in that direction. As it is it seems aimless.
Posted by Richard Kirkham at 4:38 PM