We are back from the wilds of the U.S. northernmost state a place of great beauty and bountiful resources. I'd like to thank my padwan learner for taking over while we were gone. I checked in on line several times and enjoyed the posts at 75cents a minute. This is a good reason for her to take over, as slow as I type if I had tried to do the posts from the boat, I'd have spent as much as I did sending her to U.S.C.. It also helps that she did a bang up job on the movies she watched. You can check the comments sections for additional info, I'm sure you all enjoyed them as much as I did.

Today, Lando Calrissian faces down Darth Vader a year before either of them appeared in the Star Wars movies. This showdown tales place right at the start of this movie and you know these two will be the featured stars of the film from the dialogue and set up we get in the first couple of minutes. This movie is set in 1939, before World War II, before the breaking of the color barrier in baseball and well into the depression era. The times were politically charged and there is a strong socialist theme underlying some of the motivations of the ballplayers. The only way that it works though is if they are entrepreneurs and take some risks in order to get a profit. I guess that undercuts the revolutionary talk in the movie, this is really a story about how a group of oppressed people take charge of their own lives and try to make it work the old fashioned way, by building a better mousetrap.

It has been a number of years since I saw the movie but I remembered most of it pretty well. There are good guys and bad guys, tight scrapes, a old time car chase, and some fun baseball shenanigans for everybody. The actors are solid for the parts that they play except on the diamond. James Earl Jones looks like a ballplayer from the times but he can't really swing the bat convincingly. Lando, I mean Billy Dee Williams, is the All Star Pitcher, but there is nothing intimidating about him or his pitching style. He is our hero, the one with the chip on his shoulder that inspires the others to band together to form a barnstorming baseball team to compete with the owners of the negro league teams that they all come from. The Negro leagues had some of the finest players in the history of the game and it is a shame that it took so long for this country to grow up in regard to race. 71 years ago a black man could not play professional baseball with white men. Today, the President of the United States still can't play baseball, but that is because he is a basketball player, not because he is black. 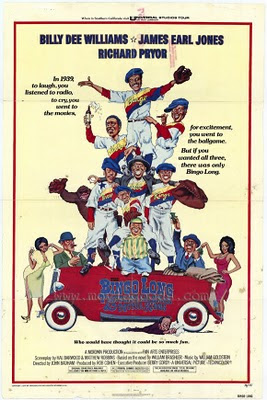 The struggles of the characters against not only economic strife and racism, but against a group of owners that treated their teams like sharecroppers. I don't know how accurate the portrayal of the black owners is, but it helps make the film more accessible because it is injustice that the players are fighting against, not simply another race. The owners scheme to break up the all-stars as a threat to their power, and insensitive bigots take advantage of their racial power to cheat the team. At each juncture, the team comes up with creative solutions and makes a go of their enterprise as best they can. The two leads represent the moral conscience of their situation and are usually in agreement. The final breakdown of the team before it's resurrection, occurs because one of the leads will not tolerate theft, as justified as it might appear to have been. In the end there is a reconciliation because they face a bigger common enemy.

Richard Pryor is in this movie and he plays it mostly for laughs, but he is not mugging it up, his character is just a funny guy. Some of the same themes are in "Greased Lightning" which I wrote about earlier in the summer. There are a lot of familiar character actors working in this movie. One of them, Tony Burton, is best known as Apollo Creed's manager in the Rocky films. He was a customer of Bert Kaplan's insurance office when Dolores worked for Bert in the early 1980's. He is a good actor and was a very nice man as well. I always get Ted Ross and Reginald VelJohnson from "Die Hard" confused with one another. They both have those voices that work so well in these character roles. Ted Ross is the evil team owner in this movie, in "Arthur" a few years later, he plays the very sympathetic chauffeur. This was a mostly black cast in a movie that was designed for a broad audience. Some of that kind of film-making seems to be missing these days. It seems too often that the audiences are targeted too narrowly today. I still want to see the re-make of "Death at a Funeral" because I enjoyed the original, but why is it remade three years later with an all black cast? This is a marketing decision not a artistic choice.

The movie looks really good, the production is very authentic. The baseball parks and automobiles fit the times really well. I loved the uniforms of the team, the way they extended a rainbow theme and the name of the team across each player's chest so that you can see the rainbow and read the title when they stood next to each other in order was really original. I watched this today on my trusty laser-disc player and it was a good print with one terrible jump cut when the disc changes sides.This was the first feature film of John Badham, a director that made a lot of noise in the late seventies and early eighties. Originally, Steven Spielberg was going to do this film, but when Jaws broke open the money flood, he was given a chance to do his pet project "Close Encounters" instead. It is interesting to think how the movie might have been different if Spielberg had directed. I think Billy Dee Williams performance might have been stronger with a director who knew how to get the right emotions out of the actors. Billy Dee is not bad, but this movie could have been great instead of just really good if he had been more effective.
Posted by Richard Kirkham at 6:14 PM