When the Game Stands Tall

Every year over a million high school kids play American Football. Every year more than 70,000 play in college. That is a lot of young men being exposed to the game that is sometimes seen as physically brutal and socially backwards. In the last few weeks at both the professional level and the Collegiate world, there have been a number of embarrassing stories about the behavior of players of America's favorite game. There is a bombardment of statistical data being dug up on the injuries that playing the sport can do on the body, especially to the brain. The game has been played for over a hundred years and still there are elements to it that change, evolve, get criticized and ignored. The President has said that if he had a son, he would not let him play football. There may be a time when enlightened do-gooders manage to remove the game from the culture through lawsuits, over-hyped hysteria, and the gentile chipping away that occurs as our civilization changes. Should that happen, the big question we should be asking ourselves is, What will we lose?

The answer to that question is contained in almost every football movie that treats the game seriously as opposed to a way to get laughs. Even those that are focused on getting us to giggle a bit , sometimes point to the reason football matters. It is a game, that in the right hands, teaches it's players about responsibility, hard work, teamwork and the values of  competition and sportsmanship. Those goals have been subverted from time to time, but for every incident of a coach who places winning over all else, there are dozens of coaches who really are teachers. This movie is a story about one of those guys. Bob Ladouceur is the coach of a high school program in Concord California (The home of my buddy Dan). The school is a private Catholic school that had no history of success in football and he turned them into perennial champs who had a twelve year 151 game winning streak. Ladouceur  is one of the good guys and he tries to make his kids good guys as well.

Film hipsters will hate this movie for the cliches and wholesome values that it espouses, while largely ignoring some of the other aspects of football that make it more compelling, like the hard hits. This movie does have a preachiness about it that can't be denied, but I'm not sure that the life lesson overshadows all the other things the movie has going for it. There are a good number of football sequences that build suspense the way these movies do. Director Thomas Carter has been associated with a number of movies and TV shows with sports based themes. I remember watching him as the basketball player Heywood in the late seventies TV show, "The White Shadow".  Even as a young actor he was interested in directing and he has a credit for that program to show for it. His movie "Coach Carter" focuses on a similar role model in the nearby area of Richmond California but it focused on basketball. Carter knows how a sports film works, and he can hit the keys effectively, the question is whether he can riff successfully enough to make this more than a prefunctory sports movie. I thought he did in a number of ways.

The main adults in the story are played by professionals who know how to do their jobs. Just as the movie emphasizes teamwork, no one here is trying to make themselves bigger than the story being told. It would have been easy for Carter to let Jim Caviezel shout and emote and try to build histrionic moments on film.  There is an excellent speech delivered at the funeral for one of his players that has very effective moments in the language. Caviezel is subdued and honest in the way he speaks.  At the end of the film, there is a clip from the actual service and the real Coach Ladoucuer, and he is also honest. The real life setting was more raucous however, and the film version works better with the themes the movie is emphasizing.  Laura Dern and Michael Chiklis lend appropriate support and they are surrounded by a cast of young actors who look like they could be the high school team, and they are all excellent as well. The only over the top performance comes from Clancy Brown as a frustrated father, living through his son's accomplishments. Brown does what he is told, it is the writing that goes a little overboard here. 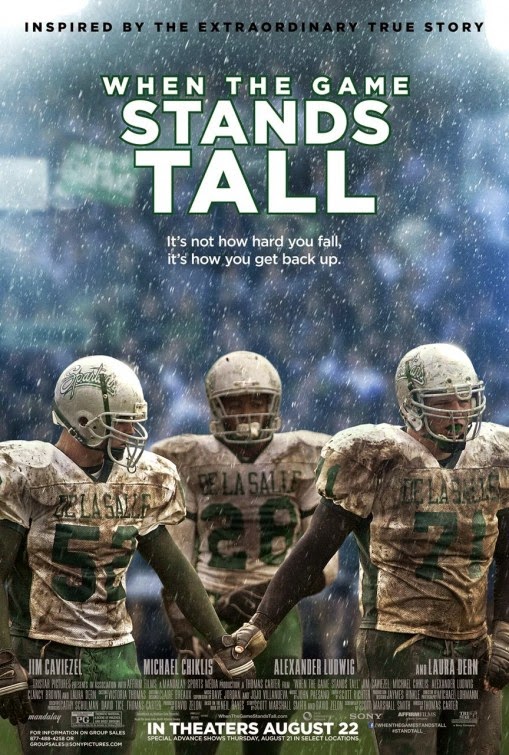 There are a thousand testimonials to guys like Bob Ladouceur, teachers who made a difference in a young man's life. Speak to anyone involved in team sports and they will have those kind of stories. Football however, requires a stronger force to be exerted. The dedication and practice that goes into playing that sport is not comparable to any other sport. The degree to which the players have to rely on one another is not like any other sport. Maybe the world is littered with films like "Remember the Titans" and "We are Marshall", but every generation of fans deserves to have a film of their own. I don't find it obnoxious that this movie is filled with references to biblical passages and stories. They are the kind of faith based lessons that are not found enough in mainstream movies, so if you want something different, consider that as the unique contribution of this film.