Here at the Kirkham house there are several films that we revere. Obviously Jaws is on the list, just take a look at the masthead. We love Indiana Jones, the original Star Wars Trilogy, Die Hard, The Adventures of Robin Hood, and just between us friends, Defending Your Life may be our favorite Albert Brooks film.  Singin' in the Rain rules, Casablanca breaks our hearts and Chinatown is more beautiful every time I see it. With only so much love to divide up, it is hard for movies to grab our attention and become fixtures in the default watch list. Our indecisiveness with so many choices has lead us on many occasions to re-watch Zodiac.

In the last couple of years though, one film has routinely pulled us out of the house whenever we saw there was a screening in the area. I've posted pictures of my beautiful blu ray version on my Facebook page, and the soundtrack is on my Kindle, waiting to be played in the car when the traffic gets too tense for me. "Lawrence of Arabia" is a nearly four hour experience that hardly feels like it is ninety minutes. Having sung it's praises several times in the last year, I stirred the generosity of an old friend. John Shosky and I went to grad school together for a year in 1979 and 1980. For reasons too complicated to review here, John pursued his advanced degrees elsewhere after that year and I lost touch with him for a couple of decades. When people curse Facebook for the time suck that it is, I understand. but they should also remember that it has enabled millions of people to connect with family and friends that they might not see regularly. John and I reconnected a couple of years ago because of this tool and I am happy to say we are friends in the present tense and not just in the past. He has apparently been paying attention to some of my posts because out of the blue, he sent me a nice little treasure that I want to share with all of you.

Arriving at my doorstep just a few days ago was a copy of the Saturday Evening Post from March of 1963. It is in good condition for a fifty year old, over-sized, photo heavy magazine. Those of you too young to remember magazines, might want to look up" Life", Look", "Readers Digest" and "Colliers". This was how we often got first looks at entertainment properties, before Twitter, Facebook, You Tube and all the other social media. The magazine John sent features a long profile of Peter O'Toole, starring in the new film "Lawrence of Arabia". The oversize cover was impossible for my scanner to fit into one shot so I have done the best I can to edit a cople of scans together so that you can see it. 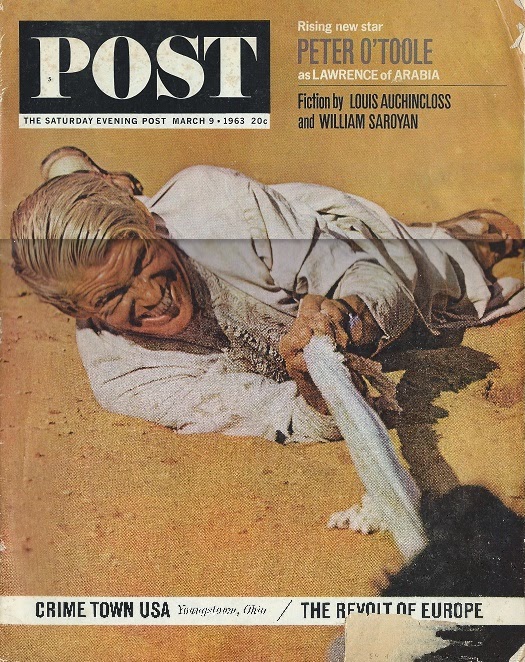 The scan does not do it justice, the cover is in much better shape than it looks here. The article is several pages long and does a nice job covering O'Toole's background and his preparation to take on the role of T.E. Lawrence. This was early in the run of the picture, which was playing at the time only in Los Angeles, New York and London. The film was quite the sensation and the speculation about Peter O'Toole's future is interesting to read now that fifty years has passed and his life is ended. None of the shots in the magazine will be undiscovered treasure but they may give you other fans of the movie some moments of joy to share. 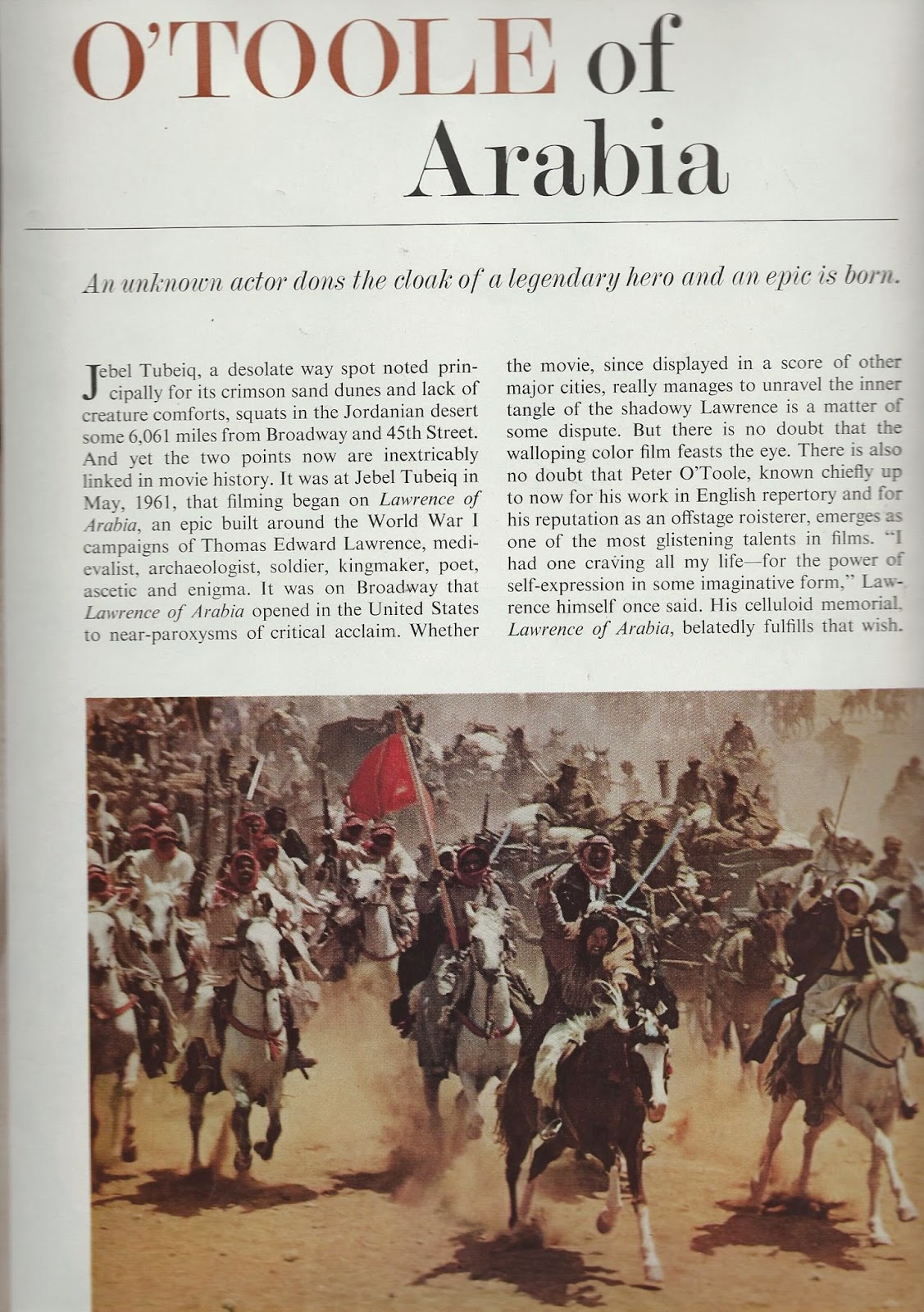 Here is the opening of the article, as you can see there is a nice shot from the film at the bottom. Opposite of this was a full page and a third portrait of O'Toole in shadow that I know the scanner would not be able to get without flexing the magazine more than I am willing to do. The style of the article will be familar to readers of publications like the NewYorker or Atlantic Monthly. It is professional and not fawning. The text is not a studio press release, but it is not far from it. The truth is, Mr. O'Toole deserved the accolades he was receving and the descriptions are flattering without pandering. Some of the hardships of filming the picture are outlined and the familar story of having to truck in water for the crew at a cost of $3 a galleon (in 1962) is highlighted as might have been expected. There was enough background on Lawrence himself to make the story a bit of a contrast between the subject and the star.


Here is a behind the scenes shot that was probably staged by the studio publicity department but it does not make it less entertaining. 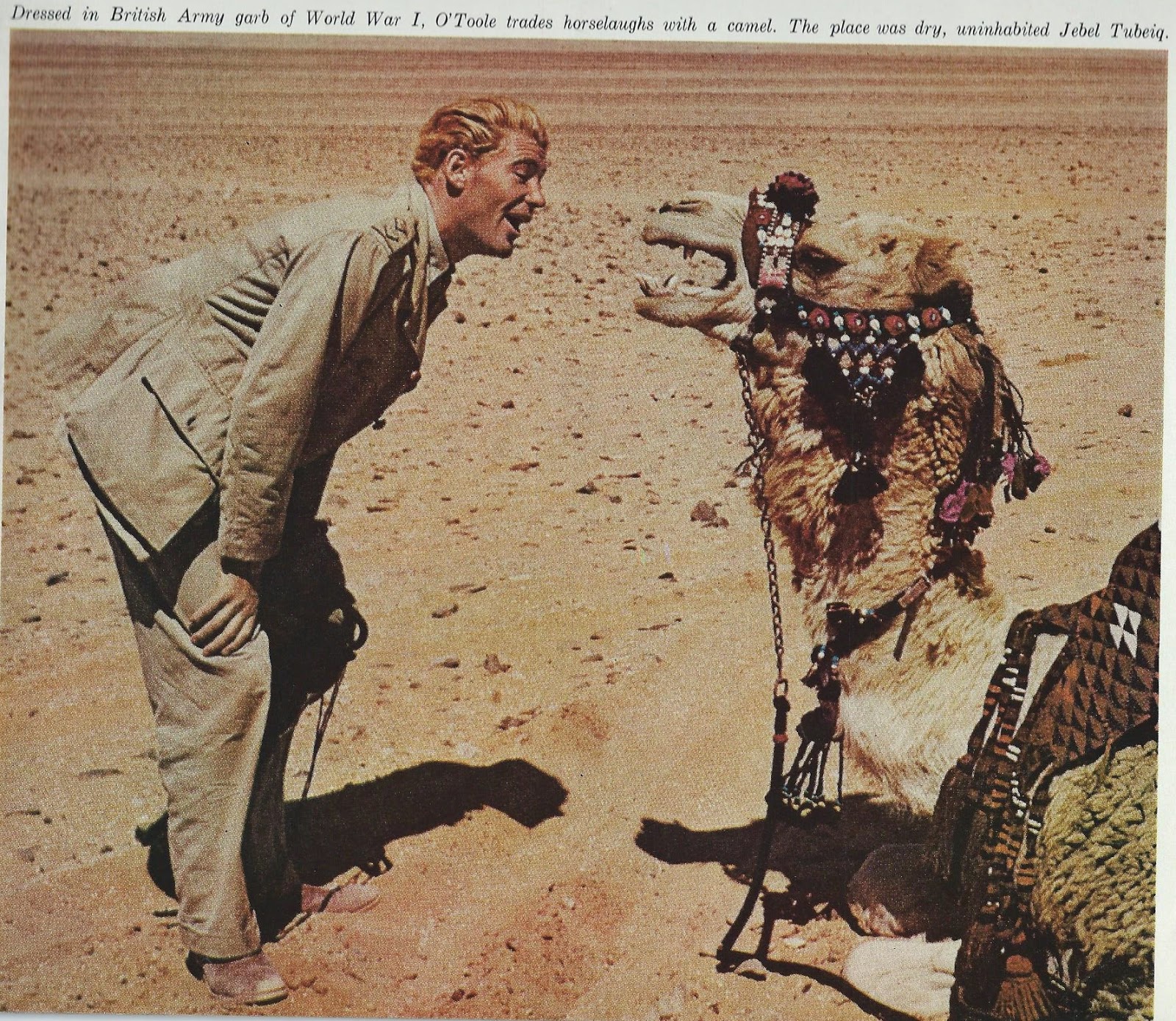 In the article there is a rather gruesome description of some of the injuries and hardships that O'Toole faced in playing the role. The cyst on his posterior from riding the camel makes this picture a lot more ironic as a result.

Some of the posts that might have encouraged John to pass on this very nice gift are reviewed below. 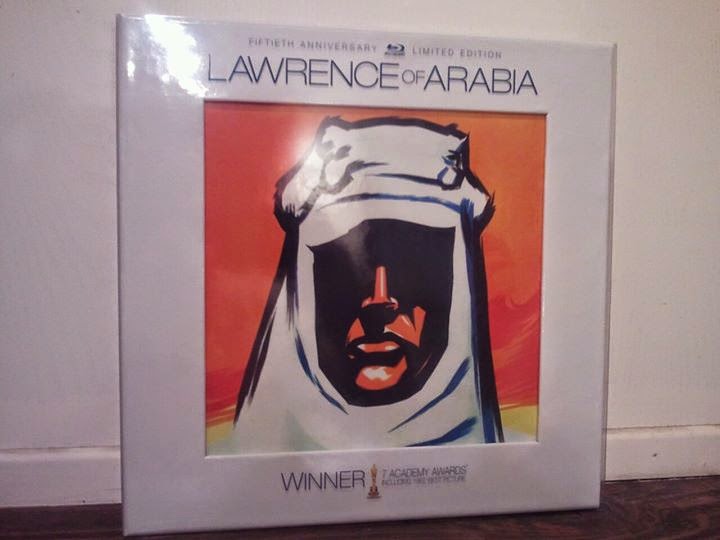 Here is the Blu Ray package that Amanda gave me for Father's Day last Year. It includes a beautiful coffee table book with several stunning pages of photos. Also included is a 70mm film strip clip, something that will not be available for future movie geeks to own from new movies since they are all now delivered digitally. 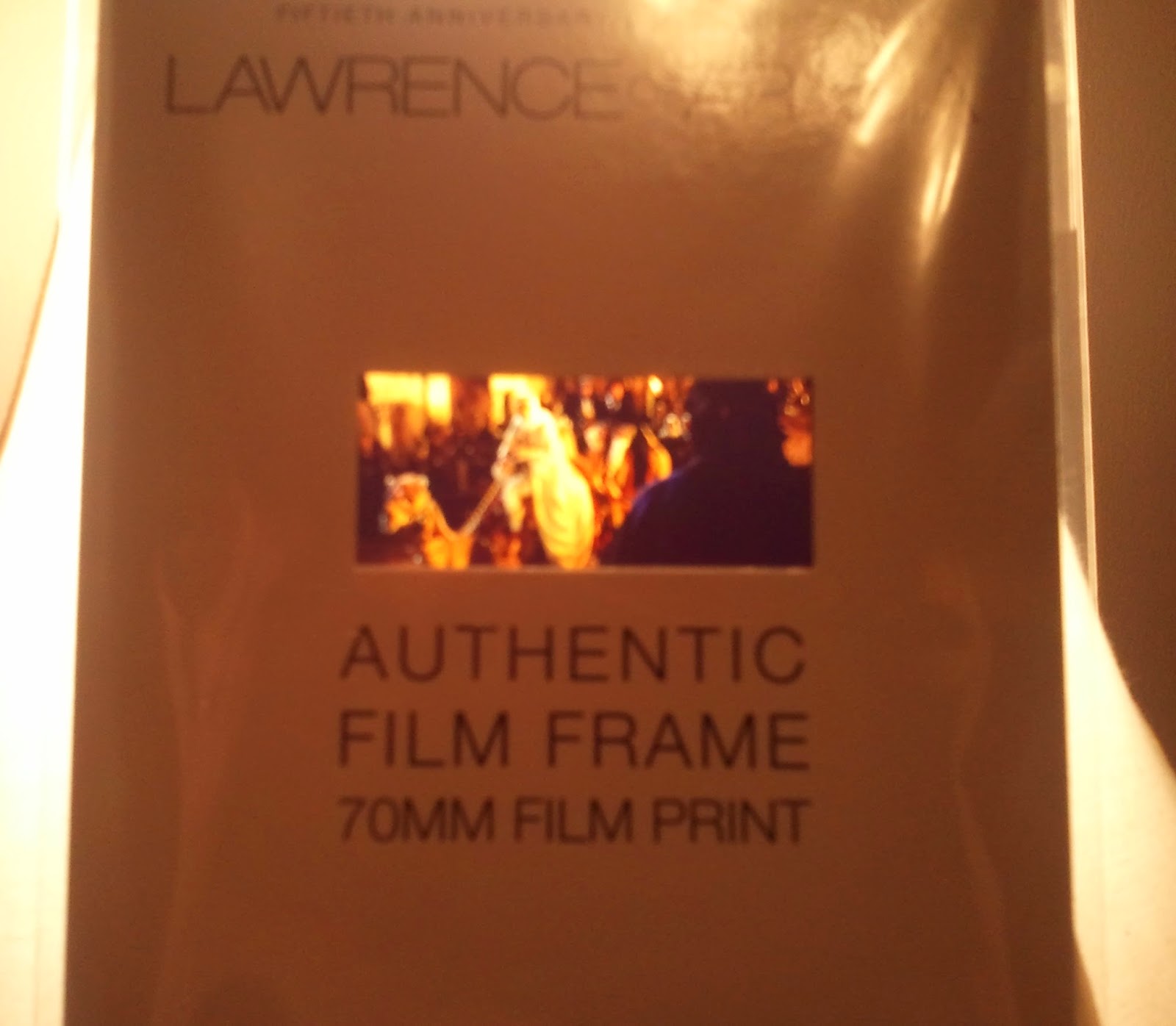 The film strip is encased in a nice protective cover that is numbered. 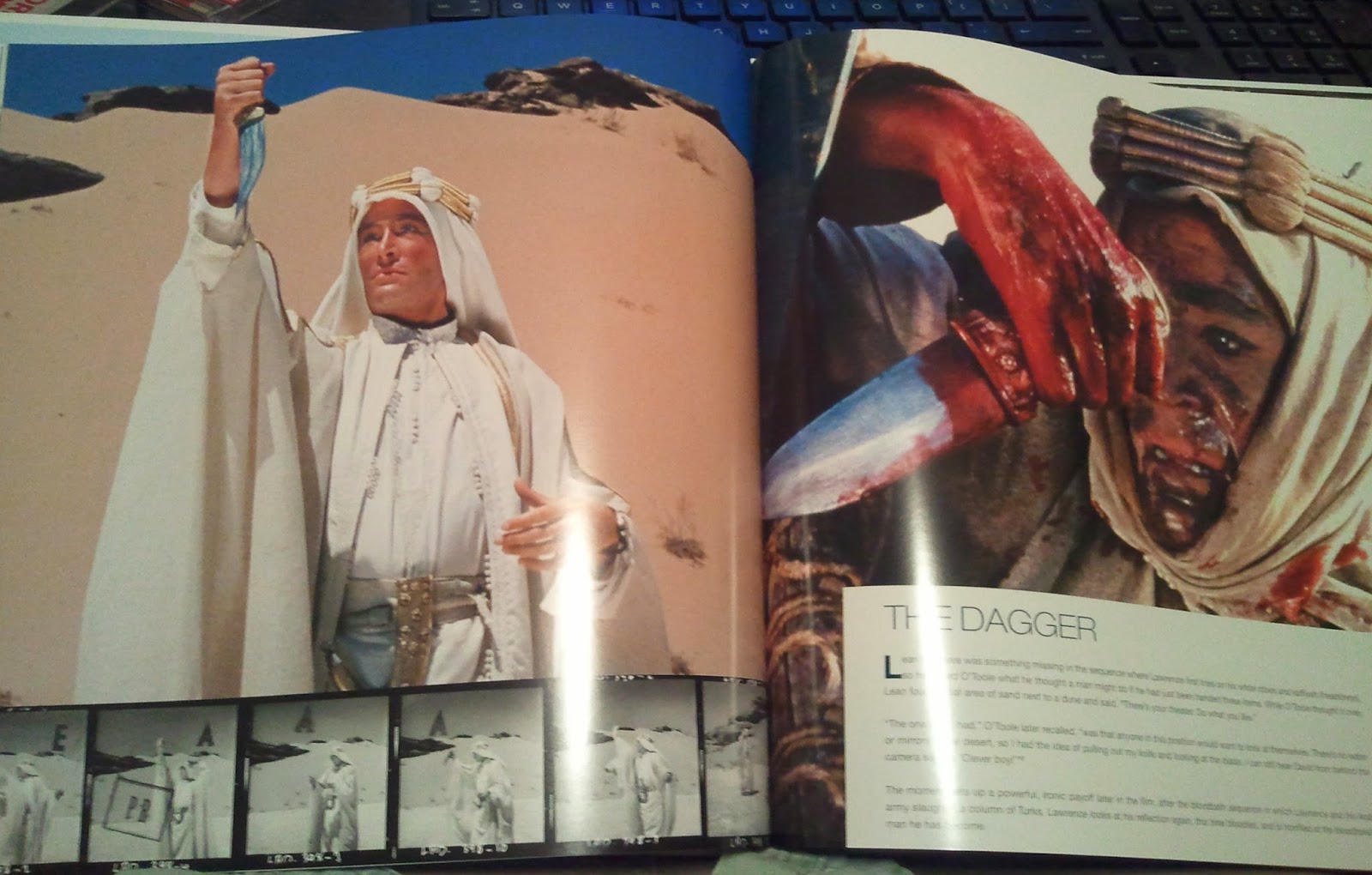 As you can see here, the coffe table book has a very beautiful look to it. This is a shot of the book opened to a dramatic set of images from the film. There are also pages from the opening, the Academy Awards, and a variety of other events.


Before the Blu Ray, I had a very nice DVD version that I have not opened, I usually watched my laser and I just never got around to exploring this in detail. I suppose I should crack it open and see if the bonus features are any different than those included in the new Blu. 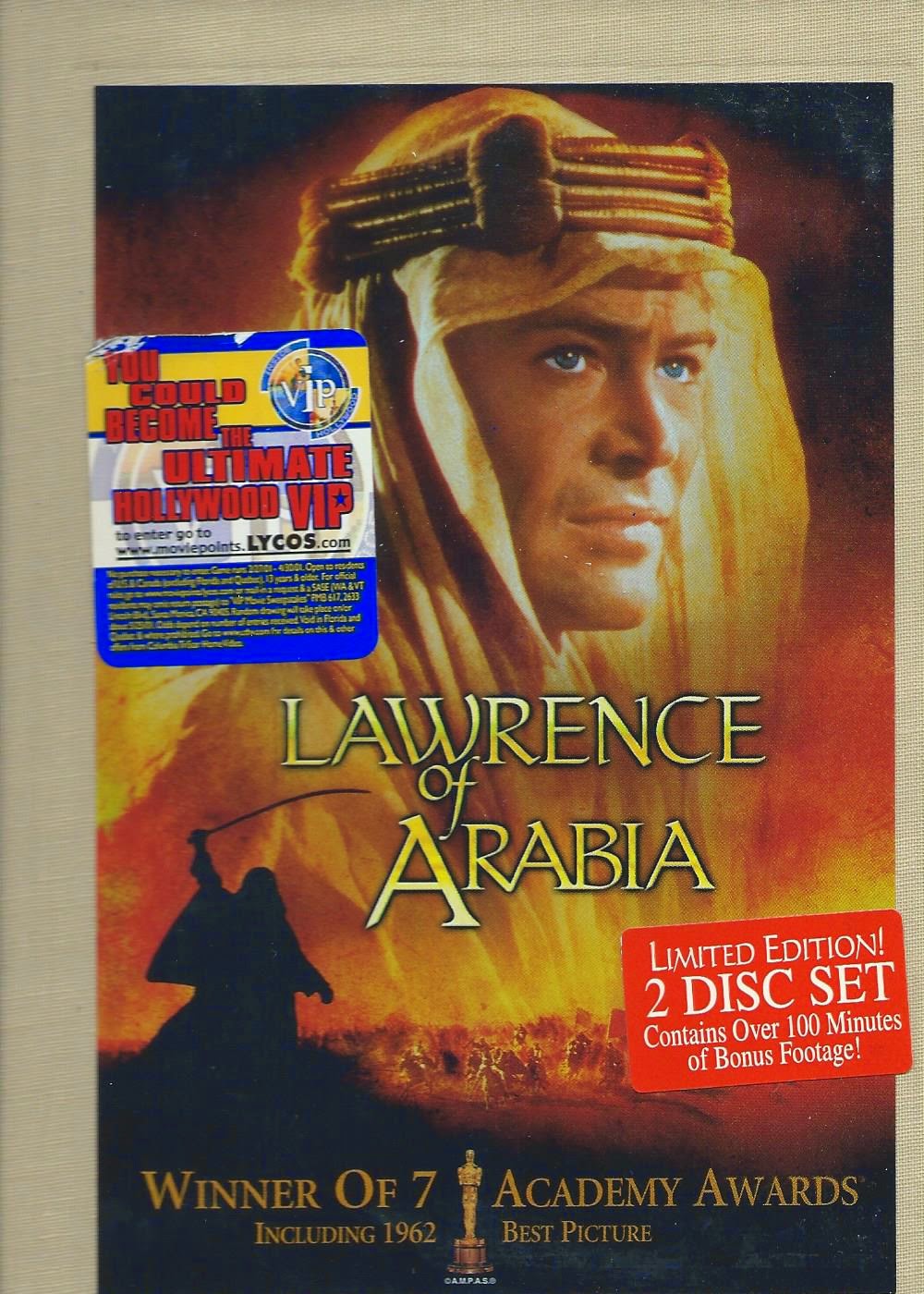 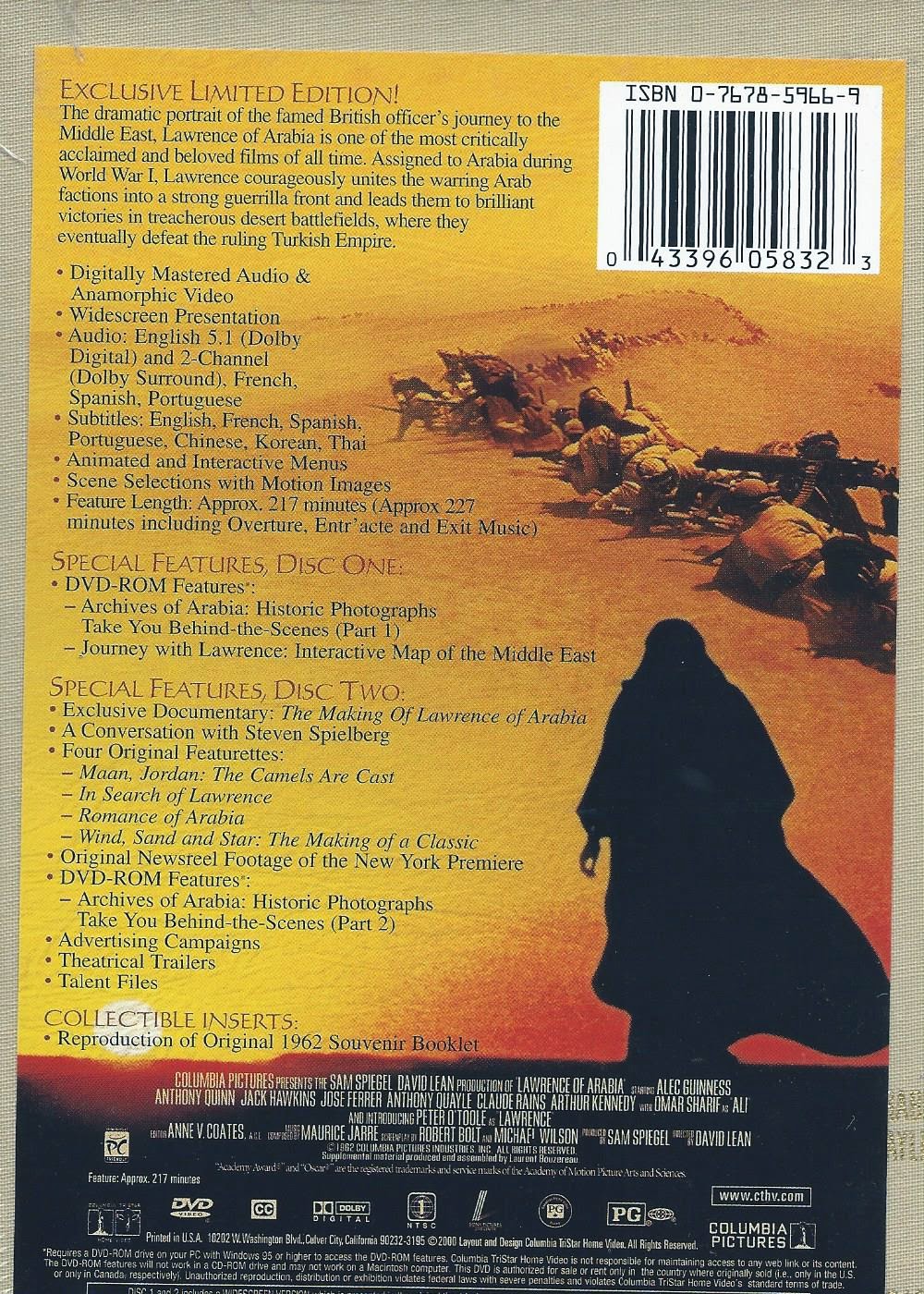 The cover is bound in cloth, similar to the "Homeweave" packaging used with the "Gandi" disc released at the same time.

The form that I most frequently used to view Lawrence for nearly twenty years was a Laser Disc. For you out there unfamiliar with this format, think 12" DVDs. Laser Discs were the first home formats to include bonus material, commentaries and original aspect ratios. My Laser was one of the Criterion releases, which are upscale, film fanatic type presentations. 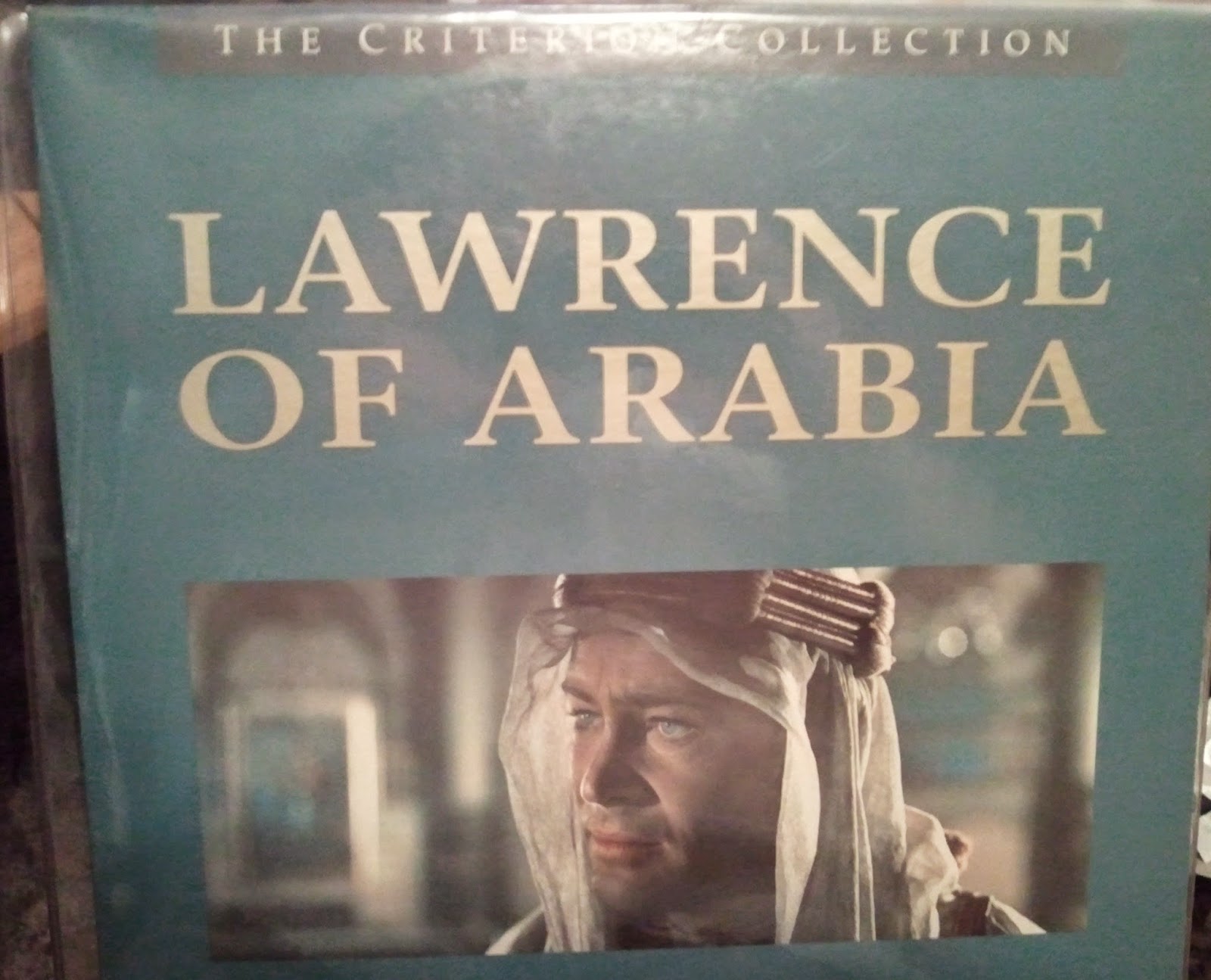 This disc came with a nice insert, describing the 1988 restoration of the film to it's original format. The chapter stops are listed for each of the additions and changes made. 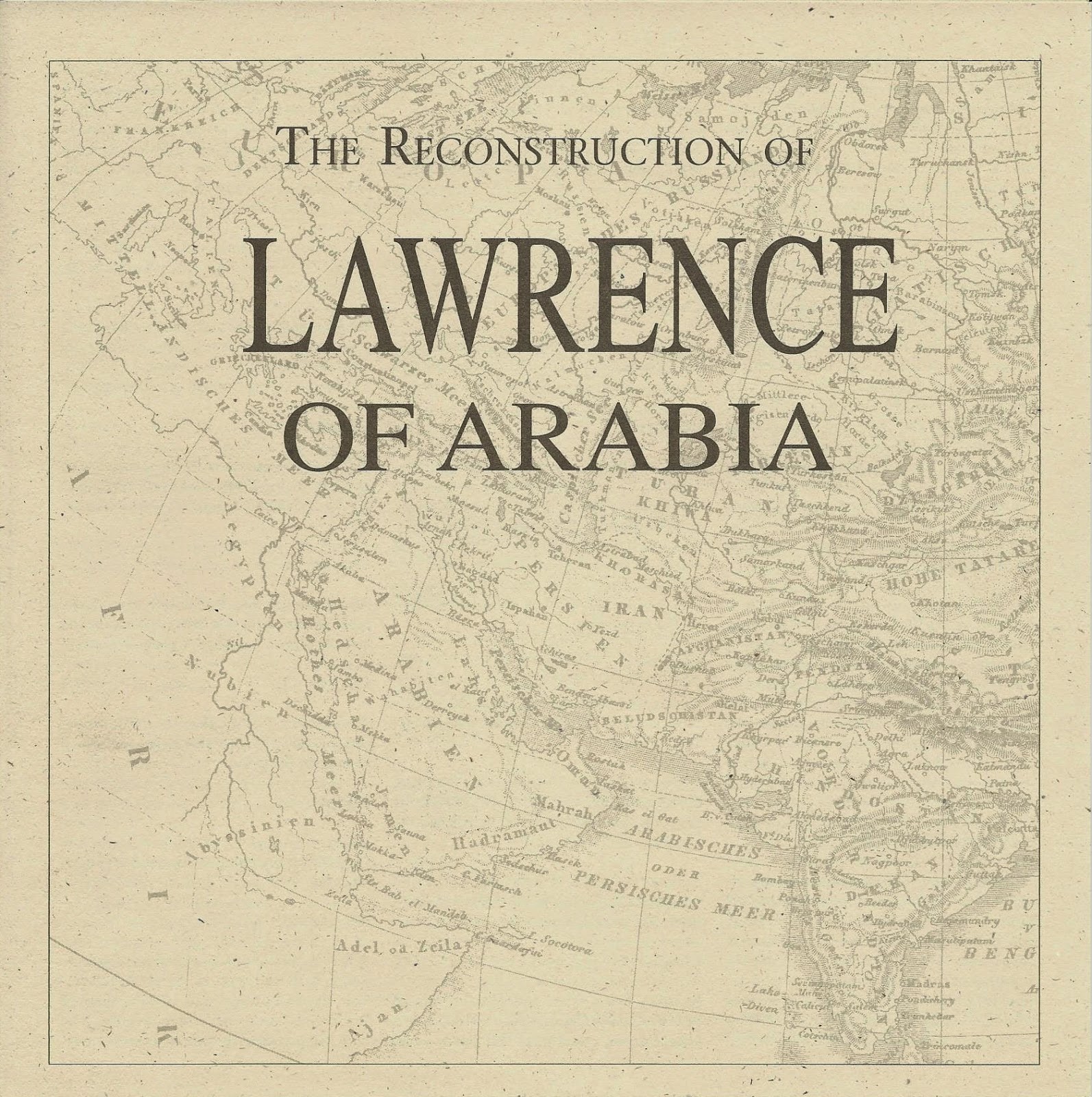 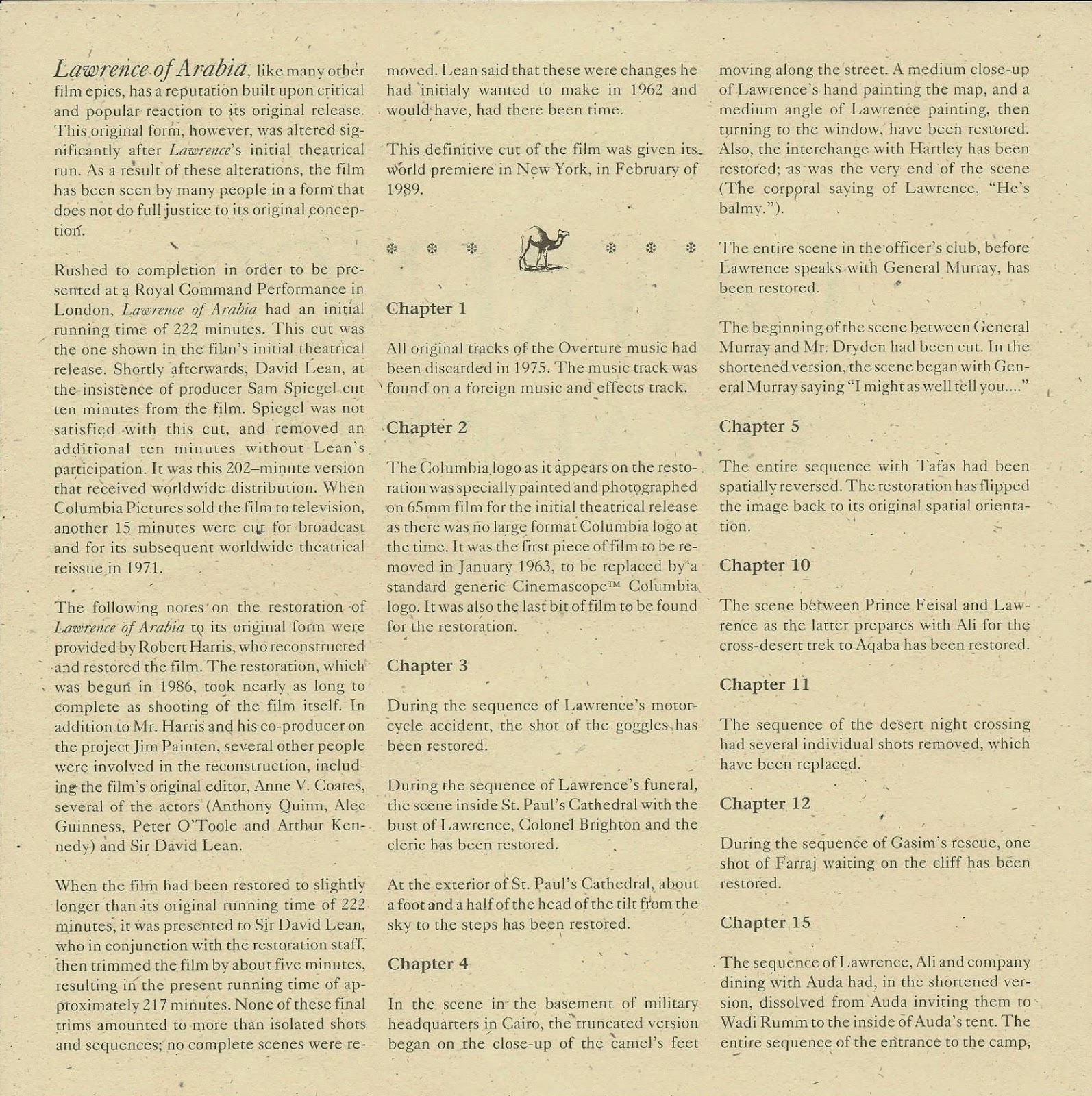 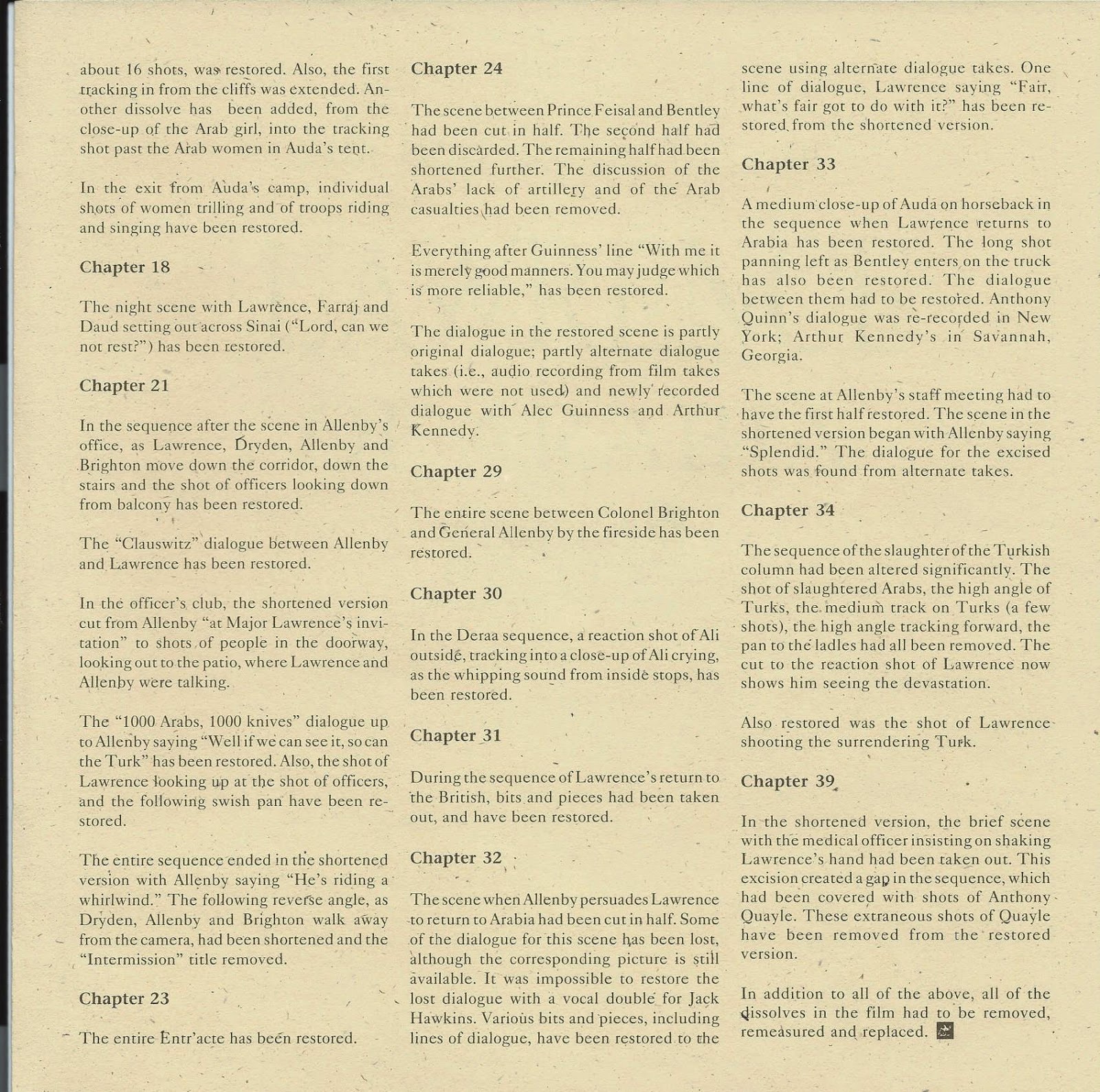 The one format I do not have is the two tape VHS version that was released in a pan and scan format. I never owned it although in the early days of home video, I probably longed for it.

If this has not been enough "Lawrence of Arabia" for you, below is the vlog post Amanda and I did on the movie when we went to the screening at the Archlight last year. It runs about 10 minutes and we had a good time doing it.


Once again, I want to thank my friend John for his thoughtful passing on of the magazine. If I ever hear the story of how he aquired it, I'll come back and add it to this post.

Posted by Richard Kirkham at 8:16 AM

Wow. What a collection! So jealous :-)

Thanks Michael for coming by. This post probably feels a bit like one of those "package opening" You Tube videos, but the magazine inspired me to dig out some stuff and I just could not resist.

When I reviewed Lawrence of Arabia I referred to it as the best film of all the Oscar Best Picture winners. It's my favorite epic film of all time.

I like this a little less than Chip does, but it fits into my top-5 of Best Picture winners perfectly. This film and the chariot race from Ben-Hur are the two best arguments for the letterboxed format every conceived.

I agree that it is one of the Best of the Best Picture Winners. One of the amazing things is that it was cut up as it was delivered to theaters and then not in a complete form for twenty plus years. One of the great films of all time needed to be rescued twenty five years after it opened.