Many people may be drawn to this film by it's roots. It is based on a popular TV show from more than twenty years ago. I knew of the show but I never watched it, not because it did not sound interesting, but because as a one hour drama in the good old days, you'd have to watch it with commercial and on a weekly basis, and I just did not have time for that in my life at that point. What brought me to the movie is almost certainly what will bring most of the rest of the audience this week: Denzel Washington being a badass.

I mentioned in my review of "A Soldier's Story" on the 30 Years on Project, that Denzel has become my favorite working actor. He has the intelligence, looks and attitude that make him the kind of character that I can usually appreciate in a film, even when he is not a good guy. When he plays the flawed good man in a bad situation, it always feels on screen to me that the other characters are encountering a venemous snake and they are ignoring the rattle. A decade ago, he was in one of my favorite revenge driven movies, "Man on Fire", playing almost the same character. Then it was young Dakota Fanning that he was defending but in today's movie it is Chloë Grace Moretz. He is a skilled ex-C.I.A. operative, trying to live a life without the violence that he knew but he is pulled back in. The bare bones of the story are similar to a dozen other revenge based thrillers that also use the hook of ex- black opps guys. Everyone from Rambo to Bryan Mills seems to have a special set of skills that the audience wants to see them use.

My theory is that a movie like this is almost an inverted horror film. There is an implacable monster that is capable of killing everything in it's path. Where we cringe at the terror imposed on teen age lovers by hockey mask wearing slashers, we cheer when the monster is on our side. We want the deaths of the evil antagonists to be gruesome because we know that justice, unlike in real life, is being served to them. Robert McCall may not be a spiritual monster, but in his wake are as many bodies and horrifying deaths as you will find at Crystal Lake. Instead of averting our eyes and sinking back into our seats, as we would in the horror film, a revenge film pulls us in and moves us to the edge of the seat as if cheering on our gridiron heroes. It helps when the single minded killer is on the side of the righteous. If you look up the word "Righteous" in the dictionary, there will be a picture of Denzel starring at you with that very expression on his face.

The movie builds slowly, with pieces of character coming in a bit at a time. The meticulous nature of Robert McCall is a warning that he is not the avuncular co-worker and mentor that he at first seems. His friendly kidding with the other guys at the Home Mart store belies his true nature. We have seen in his apartment that he lives life almost as an ascetic. The furnishings are sparse, the routine is severe and there are no symbols of worldly pleasure except for the collection of books that he is working his way through. He is a strong judge of character but he is not judgmental. His words to the young man he is coaching into a security position are direct and honest and he lets Ralphie decide for himself how to proceed when faced with a weakness. The young prostitute that he converses with in the 24 hour diner in the middle of the night gets the same treatment. He is direct, honest, and friendly without becoming close, and he never scolds her.  It is when he realizes that she can't make the choice for herself that he gets involved.

There are several nice story elements in the movie that are not associated with the violent action. I like the fact that Robert can sleep once he has taken some action. I thought the image of the diner at night was clearly modeled after the well known boulevard of broken dreams variation of Edward Hopper's Nighthawks. All of that however is secondary to the bursts of violence that we are there to see and which arrive in very satisfying variations. The confrontation with the first set of gangsters is vividly gruesome and the smack talk that Denzel delivers to the one leader of the gang is notable for how it reflects the nature of the character that we have come to know. This episode is a prelude to a series of acts which will lead the audience to more and more satisfaction concerning the story of good versus evil. I've heard some suggest that we are addicted to on-screen violence, but the truth is, that we don't necessarily crave a higher or greater level of violence so much as we want a greater amount of satisfaction with the comeuppance that evil gets. 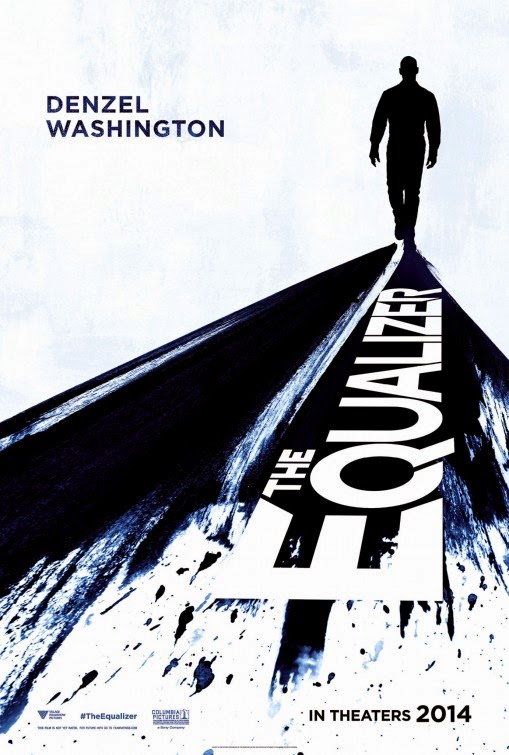 Maybe I have a personal flaw in liking this type of film. From a moral perspective, many might find it reprehensible. In the equation of justice that these types of movies seek to provide, I think they usually play to our better selves rather than the morbid part of our character. That being said, a corkscrew and a power drill are like paintbrushes in the hands of a character like Robert McCall. The actor who brings us this work of strange ethically questionable components, should also get some of the credit. If the movie features Denzel Washington killing people, and those people deserve to die, put me down for a ticket. The only thing I did not like much about this movie was the poster.
Posted by Richard Kirkham at 2:36 PM

Yeah, I enjoyed the Hell out of this flick, too. My favorite scene, though, had no physical violence. Robert McCall meeting the villain at his table on his turf. His subsequent conversation flips the dynamic (and threat) and really shows how great an actor Denzel is whether it's a drama or a genre film.

That's a good scene, especially the line, "What do you see when you look at me?" The reversal is right in front of us and that snake that I mentioned,is sitting there with a Cheshire Cat like smirk that says, "I'm death you talking corpse."