I read "Dune" when I was the same age as Paul in the story, and it was one of the best things I ever spent time with. I'd heard that the movie was being planned but in 1974 or 75, I did not follow the trades, keep up with gossip and of course there was no internet, so I had no idea what was going on. This movie reveals exactly what happened. Along with the Kubrick version of Napoleon, Jodorowsky's Dune is one of the great movies that was never made, and to hear him tell it, it is the greatest movie in history. After watching this documentary, you may very well agree with that assessment.

Alejandro Jodorowsky was an avant garde artist in the sixties who turned to film making and was responsible for El Topo, the original midnight movie cult classic.  He has a dramatic visual eye and on odd philosophical perspective. After he had another smash hit in Europe with "The Holy Mountain" (a movie that features a character who can poop gold) he was asked by his producer what he would like to do next, and his answer was the Science Fiction classic "Dune" a book that he had never even read. If you were a fan of the book, you were likely to have come across drawings by H.R. Gieger that imagined what some of the worlds of "Dune" would look like. Those images came from the project that Jodorowsky was trying to put together in the mid-seventies. This movie is a compelling story about the man who tried to make a film he thought would be transformative and instead ended up being invisible for almost forty years. No scenes were shot, but a whole crew of artists, craftsmen and unlikely actors were poised to make what might very well have been an amazing movie, when the money simply did not show up to execute the project.

This film works because Jodorowsky is a natural raconteur, who has incredible stories to share about Orson Welles, Salvador Dali, Pink Floyd and a half dozen other major figures of the pop culture at the time. This movie is full of talking heads but they are all saying something interesting and Jodo, as he is referred to as, says some of the funniest things with a dry wit and sardonic smile. Even though his heavily accented English needed subtitles at times, you knew what he was saying and how he wanted you to respond to that story. For the most part you can see that he is a passionate madman. The ethos of the early seventies possessed him and he believed that he was searching for spiritual warriors to accompany him on this quest to make a movie that would enlighten the world. Yes, he really did speak that way and he did so with a fervor that might even convince you that he was right. However, the money men in Hollywood must have looked at him aghast because he is a missionary rather than a maker of product. When he does react on camera, to the unwillingness of Hollywood Studios to back his project, you can see the messianic nut job that the studios probably feared. His fit does not last long, but coming here forty years after the experience, it was intense, I imagine it was even more so in 1975.

The director of "Drive", Nicolas Winding Refn, shares an experience of visiting Jodorowsky at his home and being invited to watch "Dune". What happened is that Jodo, got out the elaborate production portfolio he had created to guide the film he planned and then led Refn through the story of the movie, using storyboards, costume designs, publicity photos and assorted other minutia. Refn may be the only person in the world to have seen "Jodorowky's film of "Dune" even though it was only in this form, but as he puts it in his interview, "it was awesome!". We are given glimpses of how terrific it could have been by creative photography of the story board drawings. The opening sequence was to have been a long shot like the take Orson Welles used in "Touch of Evil" only it occurs as the whole Universe is explored and then we pull in on a battle with a pirate spice freighter in space. The way this was shown in the film, makes your mouth water for the complete visual experience. There are several other sections that are also nicely brought to life, even though they are just still frames of drawings and Jodo speaking passionately.

Towards the end of the movie there is a montage of images from films that were made after this version of "Dune" collapsed. Many of the elements in the visualizations from the "Dune" portfolio appear to have influenced two decades worth of film makers after this, including Steven Spielberg, Ridley Scott and the King of the World himself, James Cameron.  Jodorowsky takes admittedly self satisfying gratification in the failure of David Lynch's version of the story. That is another story that could be told in a different documentary, but it could not be nearly as entertaining as this movie was, because it would lack the insane vision and story telling prowess of the completely nuts but utterly charming Jodorowsky himself. 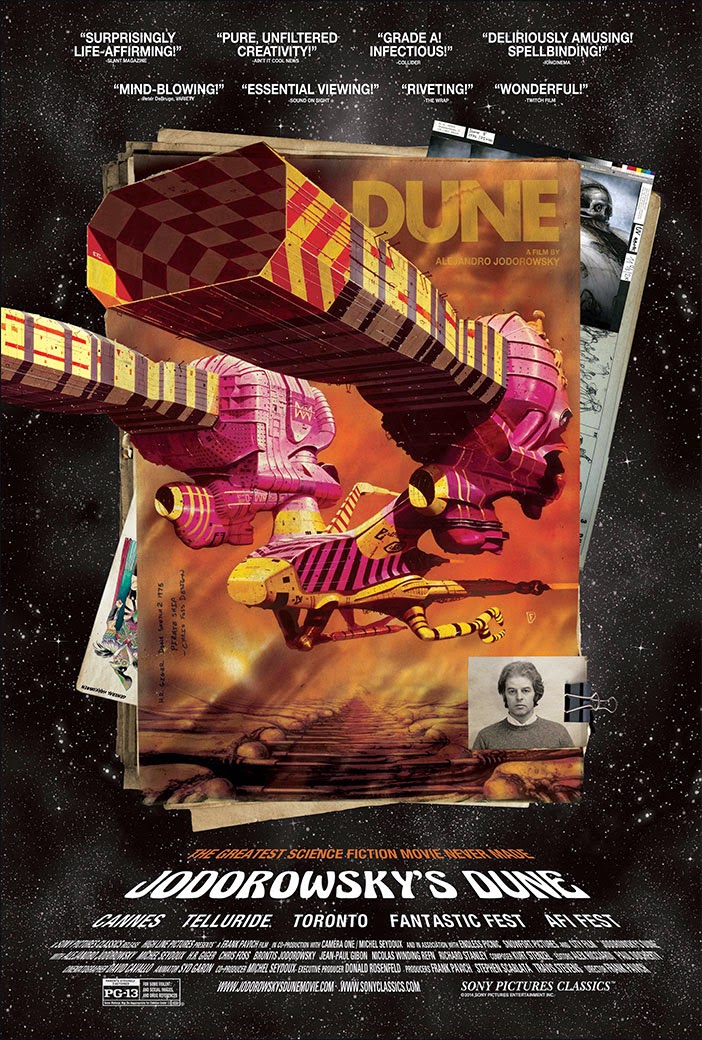 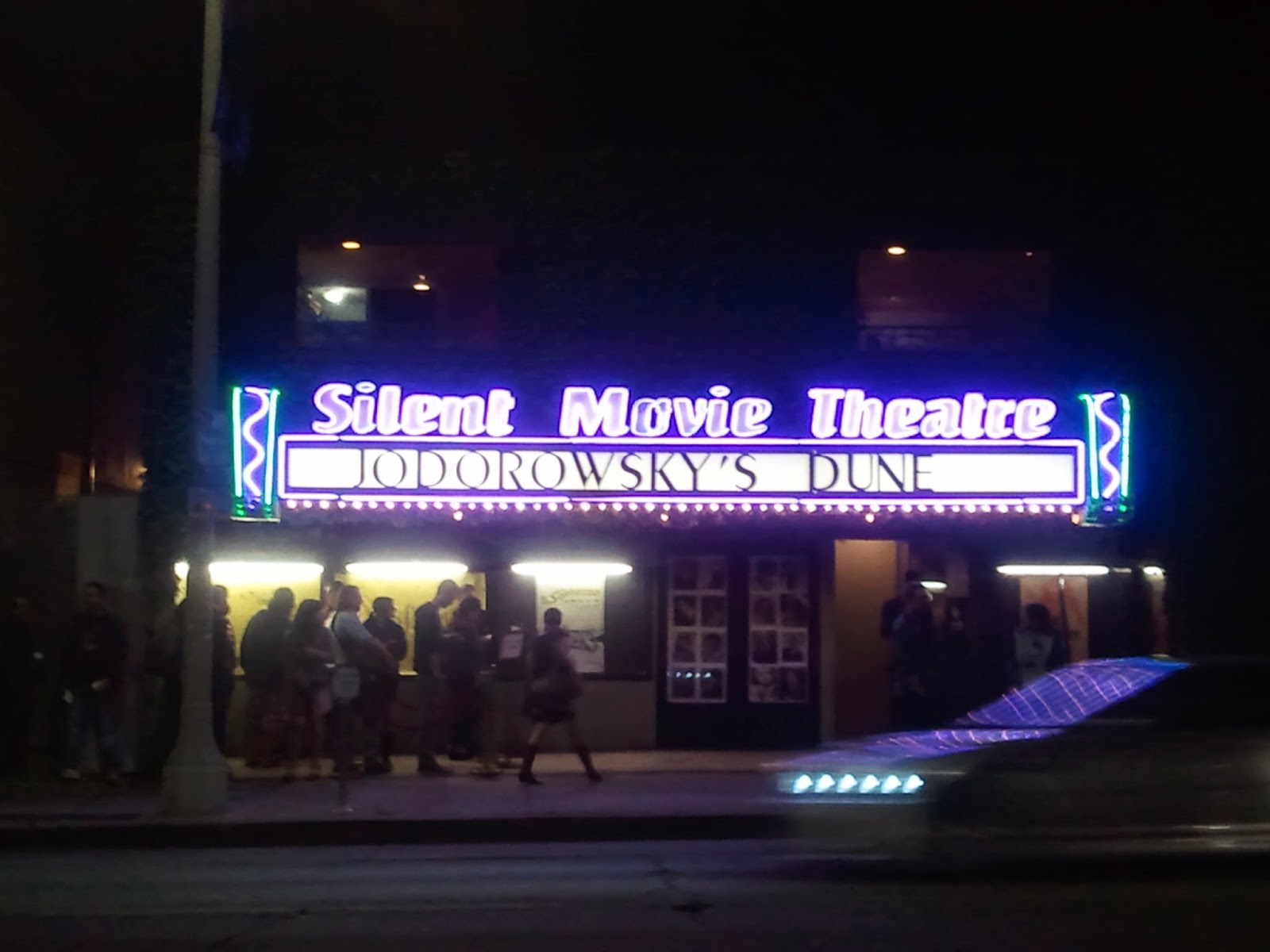 Posted by Richard Kirkham at 11:11 AM

I need to see this. Thanks, Richard.

I really liked it and strongly suggest you find a way to go. Jodo is a great storyteller.