Nothing celebrates Easter and Passover like "The Ten Commandments". Getting a chance to see it on the big screen is also a treat. I may have done this with my kids back in the late eighties or early nineties but I can't quite remember. I do know that if I did, it was not in the pristine digital form that the movie was delivered to us today in. Although it was a theatrical release for one day, I am pretty sure this was the home Blu-ray version, complete with Entrance and Exit Music, and an intermission. The problem was that they really did not take a break at the intermission, the music played briefly and then the entr'acte for the second half started. After the whole experience was over, as I was waiting for my family to exit the ladies room, I heard a young woman speaking to her father about how long the movie was that they had just seen. It sounded like they saw "Heaven is for Real". The dad was explaining why he thought it was just long enough and she said it could have been longer. Her phrase was something like "I've seen a movie that was two hours thirteen minutes, so this could have bee longer and it would not be a problem". Having just come out of a movie that runs three hours and forty minutes, I chuckled to myself and thought about how lucky I am that I can be enraptured for that long without starting to feel ADD.

The spectacle of "The Ten Commandments" starts with a stirring speech by director Cecil B. DeMille. It extols the virtues of the story as the beginning of real freedom and he makes a very pointed comparison to some of the political issues of 1956. It turns out that he sees it as a very anti-communist film because it concerns totalitarianism by one man over the rule of law that governs all men. It was an apt message then and it is equally important today. Although the photographic effects are not as impressive as they once were because of the more sophisticated tools now available, they still pack a wallop and if you are caught up in the story, the imperfections hardly matter.  The characters are quite different but you can see the seeds of Ben Hur in Charlton Heston's Moses. It was an impressive performance in the first half, but once the make-up and hair took over in the second half, he was more a cardboard hero than he had been before. 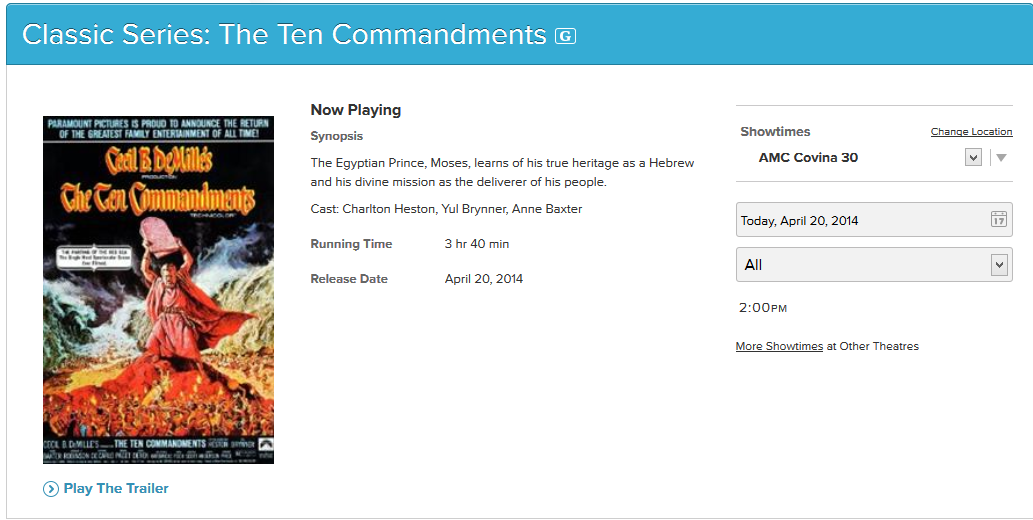 I saw that my blogging friend Eric, learned all of his Jewish traditions from this film. I guess I'd have to say that this was pretty close to my education on the matter as well. DeMille assures us at the beginning that although there is a large period of time in which we do not know the history of Moses, that his film is based on historical works by ancient scholars and theologians. I'll take him, at his word, it seems unlikely that he committed any heresy that would get him in the same hot water with religious groups as Darren Aronofsky got into with the recent "Noah". The film has stood the test of time, so there is not a lot to add. If you don't care for biblical epics, this will be a burden to you, but if you are inspired by the events of the old or new testament, than this should be a treat that you can savor for a long time (3:40 to be exact).
Posted by Richard Kirkham at 8:01 PM

I'm not a huge fan of biblical epics (or, really biblical anything), but there's a lot to like in The Ten Commandments. If nothing else, it's worth it for the massive spectacle and for Yul Brynner, who would be remembered for this role if not for The King and I.

If nothing else, it's DeMille at his best, and that's worth seeing.

Brynner made some great movies, but in my mind he will always be the King first, Chris Second and Rameses Third. So let it be written.

So let it be done.