I loved the first Captain America movie. I thought that the World War Two setting and the idealistic persona of Steve Rodgers was exactly what it should have been. The movie was very straightforward about the good guys and the bad guys. I'm also a big fan of The Avengers, I thought the splicing of the character into the modern story and the SHIELD organization took what we were given and ran with it. The mix of the super heroes helps keep some of the issues that Cap faces in the background, but the groundwork was being laid for future stories and an inevitable conflict between the Dudley Doo Right manner of our idealistic super hero and the harsh realities of the modern world and the spies that inhabit it.

"The Winter Soldier" puts Steve Rodgers back into the complicated position he found himself in during the Avenger's film. He sees that there are enemies, but he also has to question the methods of those charged with fighting those enemies. A confrontation between Rodgers and SHIELD's Nick Fury is brewing and we are being lead to believe that the spy organization is more malevolent than it originally appeared. It has been a popular pastime since the War on Terror became an official and public mandate, to question the means by which that war is being fought. Heck, those challenges have always existed even before 9/11. Bruce Willis and Denzel Washington went head to head over strategy on terror in "The Siege" back in 1998. Last year in "Star Trek Into Darkness", another allegorical story questioning the wisdom of aggressive policies on terror was crossed with a pop culture icon. I was somewhat concerned about the moralizing that goes on, getting in the way of a story about a good man, given a chance to do good, being lost in this symbolism. Fortunately, it works out for the best because the story here subverts that self questioning canard, with an insidious plot that allows the hero to be the good guy by actually fighting actively against an identifiable conspiracy rather than his own left hand.

Chris Evans was born to play this part. Like Hugh Jackman before him, the character is molded to fit the actor and the actor submerges himself in the character. The Wolverine character has often been better than the movies he was featured in, and this film has the same double edged sword. "The Winter Soldier" is not on a par with "The First Avenger", but the character of Captain America and the performance of Chris Evans, raises it to a level of excellence that will satisfy the fans. The plot is very convoluted and the twists are best left out of the discussion so that an audience can discover their pleasures and frustrations on their own. I will say that there are two things that are set up as reverse twists, that you will see coming a mile away. So, it is not quite as clever as it wants to be. That aside, the motivations and actions of the characters are even less clear than those in the first big screen "Mission Impossible" which was famously filled with "huh?" moments. You will ultimately figure it out, but it will confuse you and there is still at least one major question that does not get clarified. It is only of minor concern for the film because ultimately this will be judged as an action piece and at that it succeeds admirably.

The early action sequence involves Cap and the Black Widow, again played by a nicely amusing Scarlett Johansson, engaging in a rescue mission on the high seas. It turns out that the mission has multiple components to it that set up the rest of the plot, but the execution of the action was fun and the combination of teamwork by the SHIELD insertion group and the Captain was just enough to get us started and to show what we will eventually see as a necessary precursor to the plot. Later in the film, Samuel Jackson's Nick Fury gets a long chase segment and he uses the technology and wily experience available to a spy to bring off a pretty impressive stunt based scene. There are two follow up sections in the movie that also involve driving chases and they are solid as well but sometimes feel a little repetitive. The final battle scene is long and complicated and it looks spectacular, even though it is a little over the top. There are some clever plot twists that take place during the battle that make it a lot of fun as well. The movie does manage to keep some of the spirit of fun that made the first Captain America so effective. There is some sparring dialogue between Cap and the Widow, and a new character adds some comic relief as well as some grounding to the proceedings. 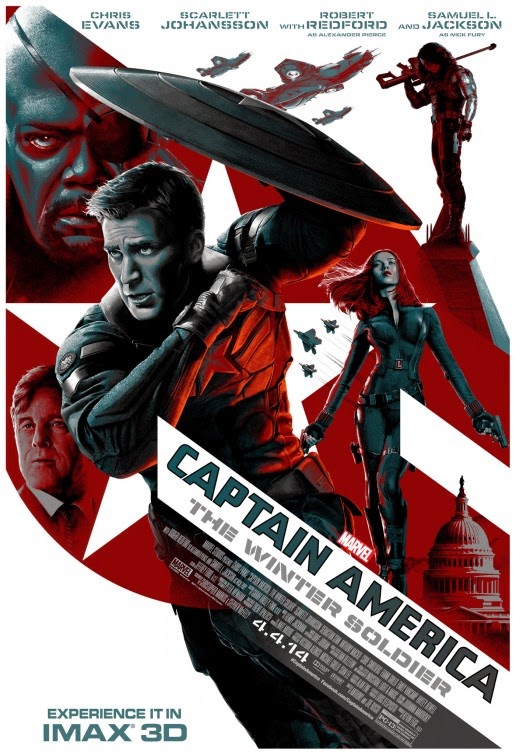 The plot line of the character of "The Winter Soldier" is set up dramatically, and the payoff is realistic in the end rather than sentimental. Key players from the first movie make welcome returns here and the conditions of each of those characters is a nice realization of the goals of the story. Fans of the comics will already know one of those characters but the other two were solid resurrections that while not essential for plotting, do contribute to giving the stories a sense of continuity. I could still use a few more light hearted contributions from a Tommy Lee Jones or a Stanley Tucchi like character. The presence of Robert Redford adds some gravitas to the story but not the energy that a movie like this could really use.  I did enjoy the sudden insertion of a more engaged Jenny Agutter for a moment or two, and Emily VanCamp could be a successful addition to the franchise with the right follow up. The real hero of the story is the honest soul of Captain Steve Rogers. His impromptu speech and rallying of the troops is exactly the kind of leadership that his character is supposed to inspire. I for one am completely ready to follow him on the next adventure.

Posted by Richard Kirkham at 9:34 PM