I suppose everyone knows that Wes Anderson films are an acquired taste. He has directed thirteen films and I have only seen five of them. I enjoyed "Bottle Rocket" and "Rushmore", I was largely indifferent to "The Royal Tennenbaums" despite the presence of my favorite actor, Gene Hackman, and I really enjoyed "The Fantastic Mr. Fox". For some reason I have been unable to work up enough enthusiasm for "Moonrise Kingdom". So I have not been pulled into the hypnotic world of his movies entirely, but I can say that I am not an novice either. The current offering does however threaten to drag me into the pool with the other Anderson fanatics, because "The Grand Budapest Hotel" works incredibly well for my sensibilities and I expect that it will be a movie that I return to on many occasions in the future.

Let me divide my comments into three particular sections so that you will be able to see the discrete joys contained in each element of the film. I'll start with the look of the movie. Anderson has shot this for a nearly square ratio. I don't remember if his other films have been does this way or not but I did think it worked pretty well for this story. This film is set for the most part in the early years of the Twentieth Century, when movies were presented in the nearly square format that became standard for televisions and was retaliated against by movie makers in the fifties by using widescreen formats. Even though the film is presented in a muted palate of colors, it still feels like a traditional thirties film in many ways. The set design and costumes also recall the grand days of Europe before the war with attentive concierges and lobby boys dressed in smart uniforms that contrasted well with the elegant designs of the hotels they worked in. There is wall paper in some of the rooms that recalls the complex geometric design of the carpets from the Overlook Hotel in "The Shining". The worn down modern designs in the lobby and the baths suggest a standard of beauty and wealth that are no longer within reach of the times or the culture.

Still on the look of the film, it would be unwise to ignore the photographic styles that are used to achieve some of the effects in the movie. There are clever animated bits with ski lifts and trollies that look just normal enough to fit into the movie but also just ethereal enough to make the images look slightly magical. The stairwells and kitchens also have an otherworldly film on them which makes the story feel distinctive. The prison is a cinematic tribute to movies from the past with convicts in striped uniforms and barred doors that look like meat lockers. The escape using two different ladders is completed by exaggerating each one in a way that is comic and acknowledges the cinematic roots of the comedy we are watching. There are a thousand little details that make the look of the film so distinctive. I would say that it bears more in common with the "Fantastic Mr. Fox" than it does with most of the other films of Anderson's that I have seen.

The second element that demands a recommendation is the script. The plot itself is clever enough and it is reminds me of one of those stacking Russian dolls, with another doll contained inside the first and than another inside the second. For instance, Tom Wilkinson plays a writer as an older man, who is portrayed by Jude Law as a younger version, who interacts with F. Murray Abraham who is portrayed as a younger man by newcomer Tony Revolori. It does not quite go back infinitely, but the story definitely reflects three distinct time periods and two of those get quite a bit of development. I won't say that the story is unimportant but I will say that what is most memorable for me is the dialogue. There are passages of script that just demand to be listened to. Much like Quentin Tarantino, the spoken word is poetry in the hands of Wes Anderson. Where Tarantino speaks the language of pop culture with lines that burn like lyrics to a song that you can't get out of your head, Anderson's dialogue is more like poetry. In fact the lead character speaks poetry on a regular basis but the poems are never completed although the thoughts behind them are always clear. There is great humor in the language and the way it is used in context and frequently broken up by the context as well. It always feels like there is narration, even when the narration has stopped because the characters style of talking is so in sync with the style of story telling.

Finally, I'd like to mention the depth of acting quality that permeates the film. Take a look at the cast and you will see nineteen Academy Award nominated performers and four winners lurking in the foreground, background and center stage of the film. Ralph Fiennes is a comic revelation, his manner is controlled mania. He eyes the other characters with the view of a man used to evaluating others and being able to sum them up in an instant, but still not understand how to appropriately interact with them. His manner is winning, even in the face of circumstances that should have his character screaming and running away. That's what makes those moments when he does just that feel so great, because he breaks free of the mannered style that he is accustomed to. F. Murray Abraham should work more in films. His career has not achieved the level of excellence we might have expected after his Salieri, but he has a weight to his presence and a manner in his voice that makes him perfect for his role as the older version of Zero the Lobby Boy that is Fienne"s protege. Saoirse Ronan has a lovely demeanor that shines through even though she has only a small amount of dialogue and has to work with a splotch on her face in the shape of Mexico. There are a dozen other surpises along the way and the casting is ninety percent of the success here. 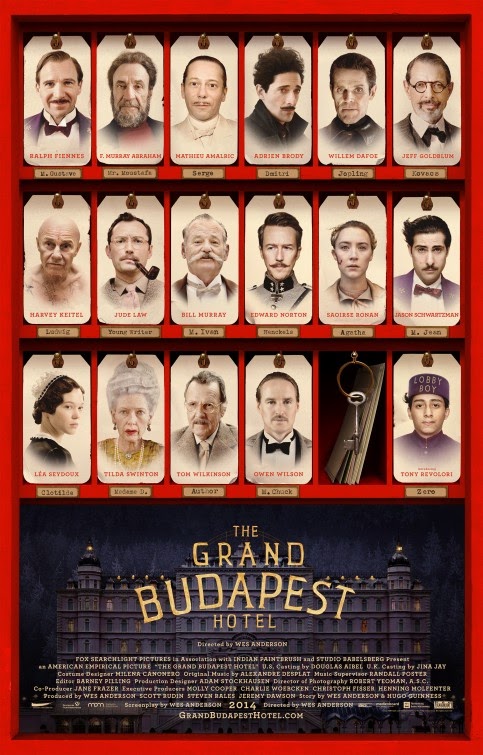 This film will need to be seen a second or third time for me to absorb all the intricate pieces of film making that delighted me. It has an off beat charm and it provoked laughter in both visual and auditory stimuli. As I started off saying, the Wes Anderson filmography may be a little off putting for some, but if you are looking for a starting place, "The Grand Budapest Hotel" is a delightful and amusing way to start an addiction to his weird charms.

Posted by Richard Kirkham at 4:25 PM