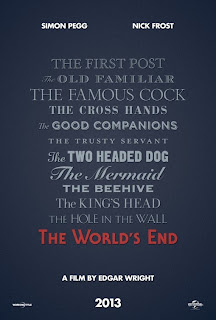 Everyone knows there can be a gap between that which is quality and that which is enjoyable. Occasionally they go together but many, many, times, you have to accept that you just like something because you do, not because it is artistic, innovative or excellent. "The World's End" is silly, annoying and spins off in a direction that makes almost no sense what ever, it is my favorite movie this summer. I laughed more per minute during this film that I have at any film I can think of for the last four or five years. If you have a low tolerance for Simon Pegg, then you should stay away because he is the show entirely for the first half of the film. If you are like me however and find him oddly sympathetic in spite of himself, then you will be sucked in during the first minutes of the movie and you will practically cheer at the conclusion.

It would be easy to confuse this movie with this summers earlier "This is the End". Both of them feature a group of friends who party too hard and end up facing an unexpected Apocalypse. "The World's End" builds up to the fireworks more slowly and it has a much stronger sense of character. The actors here are not playing thinly veiled versions of themselves, they are characters in a story. There is some background established and we are not reliant on our knowledge of other movies to make sense of who each one is. Bits and pieces of the back story emerge as the film goes forward, revealing some surprises but mostly confirming our fears and expectations about these friends. Most of us have a friend like Gary, a guy who was full of himself once upon a time and has the same party hardy attitude that got us in trouble when we were kids. That Gary is able to wrangle up his four best mates twenty years after they fell out of contact is not a surprise. Even though people do change, relational dynamics often follow built in patterns long after they have worn out any sense of purpose. Four successful guys get wrangled into doing a pub crawl they all failed to finish twenty years earlier because the one friend who needs to fulfill this wish still has the same ability to push their buttons and exploit their weak spots. Gary is not even smart about it, he is simply following programming. 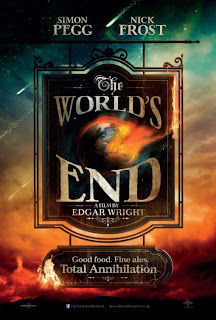 Everything in this opening section worked for me. The awkward re-connections, the "white" lies, the sense of guilt and obligation are all exploited in very funny ways. We discover that Gary has been exploiting some of his old friends for years and they did not know it. Gary is a force of nature, not automatically for good, but one that anyone in his path will have to deal with. Pegg delivers his lines like the cocksure, cheery, a hole he is playing. Timing is essential for a comedy and he has perfect timing for the comebacks, asides and outrageous arguments he spouts off on. Most of this gets even better when we get to the actual pub crawl and the alcohol starts taking effect. In the second act the other characters start to step forward and make their own comic contributions. They stop being foils for Gary's character and develop their own personality quirks that are just as amusing. Nick Frost, Pegg's partner in "Shaun of the Dead" and "Hot Fuzz", finally comes alive with some self righteous attitude and serious ass kicking skills playing Andy, Gary's closest friend in their youth. In the off the wall third act he is the main focus of the humor and he comes through just like Pegg does in the clinches.

The slow burning second act cheerfully breaks down what sense of normalcy there was for these friends. There are a couple of life lessons and sad stories injected to add a bit more meaning to the proceedings, but everything continues to be funny. The pacing of this film is a lot like "Hot Fuzz" because once we hit the third act all hell breaks loose and any sense that this movie was going to be about the bonds of friendship gets lost in a completely creative yet oddly derivative story. Look, this is a Mash up of "Invasion of the Body Snatchers", "The Day the Earth Stood Still" and "Night of the Living Dead", so how is it creative? All those parts come two thirds of the way in and they speed the film along to it's conclusion so fast that it is hard to know exactly where we left the tracks of sanity, and who cares anyway? So it makes no sense that a bunch of middle aged men are suddenly mixed martial artists, or that an alien invasion is confronted with a hysterical reductionist Star Trek type alien computer meltdown. It is done in a silly and entertaining way. The creativity here comes from taking the absurdity of the plot twist and having a damn fun time with it. 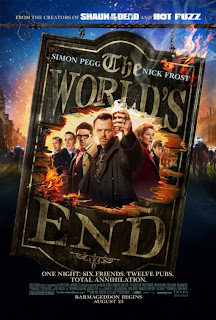 There are technical issues with some effects, and there are story issues that seem just awkward. I don't care. This is the second film in the so called  "Cornetto" Trilogy to turn a former James Bond into a villain, the music cues are fantastic, Rosamund Pike appears again in a Pierce Brosnan movie and she is mature beautiful instead of hot beautiful. The audience was laughing so much that I missed several lines so this experience will clearly need repeating. What better recognition can you give to a comedy than I cried my eyes out with laughter? Maybe I could have wet myself but I did not lose that much control and I'm still willing to say it was incredibly funny. Humor is subjective at times, maybe it won't strike you the same way it did me. If that's the case I'm sorry for you because this was the movie I enjoyed the most this year. It was original, familiar, and just so damn funny to me that I pity you if you missed the experience I had.
Posted by Richard Kirkham at 5:32 PM

I thoroughly enjoyed this, my kids, too. Repeated dialogue after it was said and done, as well. Always a good sign in our book. Fine look at this, Richard.

My daughter was tickled pink that I laughed all the way out of the theater and in the car. Every time I thought of a scene I'd start chuckling again. Glad you enjoyed and thanks again for the compliment.

I had a good time watching this. I am pretty sure that fact that we could have a few pints while we watched the film did not hurt my appreciation of it.
However, I found this to be the weakest of the three films in the trilogy. At times this film seemed a bit darker and more mature of a film.

The ending is darker but still with a slamming good joke. They are getting older so maybe the more mature theme makes some sense. Glad you enjoyed and thanks for coming by.