This is an R rated comedy, featuring Jennifer Aniston as a stripper, and the details on the rating read: "Rated R for crude sexual content, pervasive language, drug material and brief graphic nudity." Don't get your hopes up for that shot of Jen in the buff, it does not happen and the brief graphic nudity will do the exact opposite of turning you on. The story takes a funny premise, puts it into a typical story arc for all of the characters, and then throws in as many jokes at they could come up with that involve people repeating the phrase "WTF". It's a late summer comedy and it will be fine for adult date night but if you are looking for something unconventional, or consistently funny, or you just want to see Jennifer Aniston strip, be prepared for a disappointment.

Jason Sudeikis plays a low level pot dealer shanghaied into smuggling a whole lot of ganja from Mexico to Denver for his rich drug lord former college classmate. When he gets the idea to disguise himself as a family man traveling on vacation with the kids as cover. OK, that sounds like a promising idea. The problem is that to set up the concept, the writers have attempted to make everyone in the movie (with the exception of one character) into hipster malcontents. Almost everyone expresses contempt for the idea of a normal family life. In one early scene, the reliable and funny Thomas Lennon, plays an old acquaintance of our drug dealing hero, and gives every indication that his life pretty much ended when he got married. There is a very funny quote that comes when David, the dealer, describes to the stylist how he wants his hair cut. All of this subversion of the traditional life style is in aid of setting up the suppressed instinct that it turns out all of the maladjusted characters actually crave. Later in the film is a long sequence with another couple that strengthens the impression that married life is actually a kind of hell on Earth. The problem is that since they sell this concept so thoroughly in the set up, it makes very little sense when the turn comes. The sad story of how David and Rose, the Jennifer Aniston character, supposedly met is meant to create a bridge to that reversal but it is simply not strong enough.

There are a lot of random laughs in the film so it is entertaining. The problem is that the laughs often have little to do with the story. A corrupt and misunderstood Mexican cop creates some chuckles, and that is linked to the pot story. The plot line about incestuous kissing is just a joke that only fits the tag along plot development. Finally, there is the aforementioned bit of nudity which creates a big laugh but does so without really being part of what goes on. It is a stand alone joke that gets repeated later in the movie for another attempt to drain some laughs out of the audience. It works but it seems pretty lazy and there are a lot of opportunities that just seem to get lost because we are following some set ups that have little to do with the plot.

Aniston's costume design for the segments where she is playing a woman who is a "stay at home wife" work pretty well. Several outfits she wore reminded me of some of my own friends who fit that title, or at least have in the past. The strip club where she works at the start of the movie has the least amount of nudity you are likely to encounter in a "gentleman's club". Not only does Jen do a dance that might be considered a poor cousin of the dry hump, all the other strippers simply deliver punch lines, not characters. This may begin to sound like a gripe that there was not any T and A in the movie. I did not go to see it for that, but it is set in a world where that kind of behavior might be expected and no one behaves that way. It is just a constant reminder that you are watching a product put out to make you laugh, but that nothing in the movie should be viewed as real whatsoever. 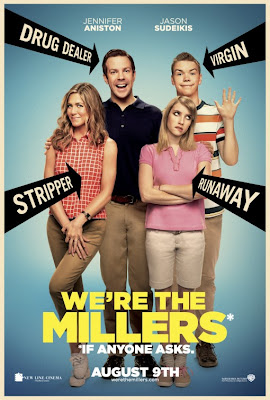 Since Colorado is now one of two states that basically make marijuana a legal product, it might have made sense to include some humor based on the setting. Instead we get Sudeikis doing schtick to muggers that rob him, drug dealers trying to kill him and his boss who is threatening his life. If smart ass dialogue were all that were required to make a movie work, then this film would be a total success. Instead it feels like a pretty mundane film, using a set of risque characters and the only way that it could be sustained was to make tampon jokes. Admittedly, they are sufficiently disgusting and out of place as you an imagine, but they feel like the adult equivalent of a fart joke, they are old and tired and keep coming up despite the lack of humor. The characters are inconsistent and the plot can't sustain itself. There are funny lines and pieces of business throughout the movie but it seems like random humor, and not the "Airplane" kind. The line I laughed the hardest at was the name that the other married couple had for their vibrator. In context it was funny and if you can live with so hit or miss humor, than the movie is funny also. Of course I was in a pretty good mood when I saw this, you may be less forgiving.

Posted by Richard Kirkham at 5:05 PM