Frankly, Woody Allen has always been a hit or miss proposition for me. Early films were zany comedies, then there came the more mature adult stories and finally there is a long stretch of inconsistency. The last of his films that I saw and liked was "Midnight in Paris". Before that I had gone for almost fifteen years without seeing any of his work. It's not that I dislike his style, it simply is that he writes movies that have little resonance for me. The fantasy of "Midnight in Paris" worked for me and I suspect I might like "Match Point" because it has a thriller element. So you might ask yourself, "What was he doing at Blue Jasmine?" It is a brittle comedy that travels some very dark places and requires a lot of patience. The answer is I am blocked for the moment from seeing other films until my movie going partners are able to attend, and I needed a cinema fix. I could have stayed home and watched something I've seen before but a fresh film is just hard to turn down.

In the long run I may have been better off turning down the siren call of the theater. "Blue Jasmine" is not a bad film, but from my point of view, Woody Allen brought half a thing. There is an extensive number of incidents that make up the story, but the major events are all told in flashback so the movie does not feel like it has any narrative drive. There is so much character development that you never feel like the story is going someplace and then it turns out that it isn't going anyplace, it just sort of ends. With "Annie Hall" Allen told a nonlinear story but the transitions and incidents were all building to something. Maybe I can't remember the sequence of events exactly, but I could tell you what the story was about. I'm back to that old joke I use with my kids and I think I may have used on this site once before. "What's it about?" It's about a hundred minutes.

Cate Blanchett is a wonderful actress who is capable of creating real emotions on screen. This movie is basically an opportunity to show off her craft and she never seems to overplay it, even when the story calls for her to have gone over the edge. As one of two adopted sisters, she seems to be the one who should have the most solid chance at success. Of course life does not always work out the way it looks like it should and her character ends up living with her sad sack sister in San Francisco. Both women turn out to have self destructive impulses when it comes to the men in their lives. Each one makes bad choices but we don't always know why. As Cate's character Jasmine gets buffeted about by the life she chose, she also influences the life of her sister, despite the fact that they are not close and feel somewhat estranged from one another. Blanchett plays confident and doubtful in the same scenes, She gets a chance to have on screen breakdowns and deal with humorous but uncomfortable situations every few minutes. There is no fault in her performance, I'm just not sure what it is in aid of.

There are several actors who should be mentioned for the good work they do here as well. Bobby Cannavale who I liked so much in "Win-Win" a couple of years ago, plays the sister's current boyfriend. He is rough around the edges but he appears to be good hearted. Even the scenes that he appears in where he is something of a menace, you never feel threatened. Instead you might have some empathy for the guy. Exactly the same thing could be said about Andrew Dice Clay. If you had suggested twenty years ago that he would be working with Woody Allen, people would have laughed, but not in the way the "Diceman" would have wanted you to. His character is the former husband of Jasmine's sister and he has a legitimate amount of anger that gets channeled pretty well.  Louie C.K. shows up for a couple of scenes and his character seems like an opportunity for some happiness in a different direction. The resolution of his character in the story is handled by a phone call that may seem obvious to the audience but was a direct betrayal of the character as presented. Maybe that is the point. Just as Alec Baldwin turns out to be something less than he appears to be, I guess it is going to be a characteristic of all the men in the story. Peter Sarsgaard plays effete snobbery so well that it is easy to believe he could be a political animal from San Francisco. For someone who is not too fond of the Golden State, Allen gets this character exactly right. Probably because he is just a left coast version of a New Yorker. 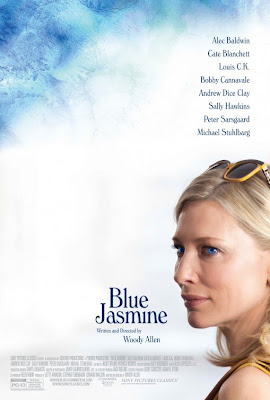 The movie follows a lot of ideas and trails back on itself several times. There is a revelation that I suppose was designed to be shocking but felt exactly right and was not much of a surprise at the end. We haven't traveled very far from the start of the story when the movie is over. The status of the main characters has not changed, there is a bit more sadness about everyone involved and there was a slight amount of humor but it is largely smothered in the melodrama of the main characters. It feels a bit like six weeks of a soap opera condensed to a couple hours. Of course in a soap, the story never ends, and this movie feels the same. If you are an Allen completest,    than by all means enjoy. If you can take him or leave him like me, this would be one that you can safely leave on the table.

Posted by Richard Kirkham at 2:34 PM