Three years ago I was thrown for a loop by how much I enjoyed and was surprised by the original Despicable Me. It made my list of ten favorite films that year and I have enjoyed it every time I have seen it since. Inevitably these days a movie that succeeds on a financial level is going to be franchised. When you invest as much money as it takes to make a major motion picture, you want to cover your bets by having a pre-sold audience. That is why so many films this year are sequels to films from other years. The results are not always satisfying. Despite the huge money windfall, "Iron Man 3" feels like a disappointment. No one expected much from "The Hangover III" and "Fast and/or Furious 6" is what it is. I worry that a sequel might undermine the original charm of a movie and spoil my enjoyment of the characters. That happened with "Cars 2" and I pretend there was only one "Matrix" film so that I can continue to admire it. I really hoped that "Despicable Me 2" would be able to extend the idea of the story and the characters instead of merely using them to grab some more cash. Well, I did not need to be concerned. The creaters of this film have as much inventiveness as they did the first time and the movie has charm to spare.

Gru, the villain turned hero from the first movie, is being recruited to aid a secret agency in fighting an unidentified new evil villain. This allows him to continue to use the wild inventions and creative plot ideas from the first movie but to do so in a reversal of roles. In addition, he is not being won over by the three girls he is now a parent too, he is doing his best to be the best dad he can be, and that makes the secret business a little more complicated. The three girls are as idiosyncratic as they were in the first story, but there are some traditional themes thrown in this time. Margo, the oldest is subject to romantic notions and the protective Father drive kicks in when Gru notices his little girl is noticing boys. There is a great set piece early on in the movie where Gru responds to a booking emergency at his youngest daughter's birthday party. It was five minutes of laughter that sets the tone for the rest of the movie.

The Minions played a substantial supporting role in the first movie and they are more prominent in this film. Personally, they entertain the heck out of me. They combine slapstick with pantomime and character humor to create some truly funny pieces of mental candy. The funny language they speak and the expressiveness they manage to have despite being blank faces with big eyes is a good indication of the animators and writers creativity. If you give people who are artistic and funny enough time, they will manage to find something to please you and the Minions almost always pay off. There are also a variety of extravagant settings and pieces of equipment that they are given a chance to play in and that helps as well. Most of the laboratory design in both Gru's lab and that of the villain, is incredibly complicated and funny and interesting at the same time.

There is a very successful addition to the cast in the form of Lucy, the rookie partner that is assigned to work with Gru by the "Anti-Villain League". She is a complementary character for our lead and presents a lot of fun possibilities. It also helps that she is voiced by Kristen Wiig and allowed to be a little loopy despite the fact she is presented as a competent agent. There is a personal story arc that works given all the characters, and the imagination of Minion Dave gives us a minute of silly bliss that focuses on Lucy very affectionately. There were a couple of side plots that exist to flesh out the story and give both Lucy and Gru some chances to be funny outside of the main spy plot. It doesn't advance the story much but it does allow the characters top be a little more understandable in terms of their relationship. 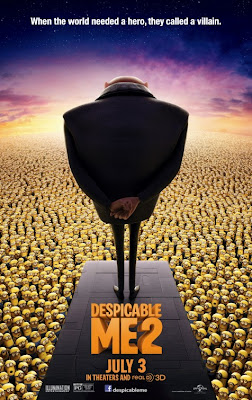 Every minute or so there was a minute to chuckle about. I laughed out loud several times and frankly I smiled the whole way through the movie. The two minor criticisms I have of the movie should not discourage anyone from seeing it. First, there were a couple of jokes based on current references, and that is one of the failings of the "Shrek" series. I hope that the writers don't become dependent on topical humor too much. There were several more generic references that did not bother me at all, including an allusion to "Return of the Jedi" in a very subtle form. Another of those effective movie references is escaping my memory at the moment, but it was just as subtle so it should not be a problem. The second issue was the featuring of four or five poop/fart jokes. I know it's a kids film, but they did not do that the first time around. One or two would have been OK, the extras just seemed to push it a little to much in the kiddy direction. This is a great family film that entertained for the whole running time. It may not seem as fresh because it is a sequel, but the jokes were not stale and the characters continue to make us want to spend time with them. No doubt we will be doing so in the summer of 2016. For the moment, enjoy the minions that we have today.

Posted by Richard Kirkham at 11:02 PM

Yeah, an enjoyable family-fare film, Richard. Like you, I had fun with this, but it's a sequel that's not quite as good as its original.

If you laugh at the Minions, you can enjoy it a lot. Sequels have a hard time living up to their predecessors, but like younger brothers, they continue to try.