Everyone looks forward to a Martin Scorsese film, even if you don't particularly care for Scorsese as a director. His work promises much and every so often he delivers. He may be the most revered director working today, but I have not always been impressed with the product. "Gang of New York" was interesting but I have never felt the need to revisit it. "The Aviator " is a well made film, but left me cold about an historical person that should be a lot more interesting. "Raging Bull" is a movie that feels like medicine to me, it is good for you but it leaves a bad taste in your mouth. I love musicals but hated "New York, New York". On the other hand, every one of the gangster films I have seen multiple times and I admire the panache of storytelling he brings to these movies. Others have complained but I think "The Departed" is a worthy film to have on the shelf with "Casino" and "Goodfellas". This newest film, is nothing like any of the movies I just mentioned. It is closest in look to "The Age of Innocence", but it is not a twisty drama. "Hugo" is a tribute to movie history and the imagination, and it works like a dream, a dream of what we want movies to be about.

The subjects of the movie are cinema history, magic, and the importance of relationships to our dreams. Anyone who has read my previous posts, know that I am a sentimentalist, and movies that stir my emotions are my favorite type of film. Being the son of a professional magician, and a movie nut, you would think Scorsese would have me before I even walk into the theater, but remember "New York, New York", he is perfectly capable of ticking me off. This time however, not only is the movie a marvel to watch, and a lesson in film at the same time, it plays on our hearts in a number of ways and makes us stare in wonder at the things we as humans are capable of dreaming. I am not a fan of 3D as it is often used. Most movies are fine without it. Exploitation fare is where I think most 3D works effectively. Scorsese has managed to make a 3D movie that tantalizes with some gimmicks, but mostly helps us see the depth of the sets and scenery. We can feel the intricacy of the world that our young hero Hugo lives in. There is some wonderful footage from the original films of Georges Méliès, but there is an imagined background to those films that is visually brought to life using modern film techniques combined with the crude but genius trickery used in those early movies.

Characters in this story all have a dream that they hope or fear. Most of the focus is on Hugo, a boy orphaned, but far from being overwhelmed. He is clever, skilled and also quite sad as he lives his daily existence in the train station in Paris between the wars. His lonely life is sustained by his desire to unlock the secrets left behind by his deceased father. The Automaton he is trying to repair holds secrets that will effect many of the characters in the story. At times, as he spies on the world of the train station, it felt like this was going to be an antique version of Ameile'. We see bits of other peoples lives, some of them seem hopeful some hateful. Hugo is not interested in all of that, he is focused on the mechanical puzzle that he thinks holds the hope that his loneliness will come to an end. The isolation that he feels must be overcome before, not after he solves the puzzle. This is where the performances of the young leads, and the old-timers come together to give this story life. It looks like it is a kids movie, but it is only a kids movie in so far as all of us are children when faced with the wonder of magic. The characters are not warm from the outset, they are often bitter and suspicious. The one exception being Isabelle, played my my favorite Hit Girl, Chloë Grace Moretz. It is only after Hugo begins to trust and care about Isabelle, that any of the rest of his hopes can come true. 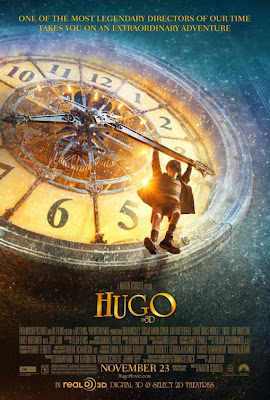 So much goes on in the movie that is hard to describe without giving away plot details, but I can say it is all visually realized in a wonderful way. The mechanical gadgets, and moving parts of projectors and clocks are ubiquitous, they are in the foreground, background and center of the story. Rather than being distracting, they make the world of Hugo more realistic. I marvel at technology of any type, not just the digital world we live in but simple concepts like mirrors and watches, which have been around for hundreds of years but required someone to come up with a way to make them work. Georges Méliès was one of those people that figured out how to make something work. This story tells us in retrospect how movies came to be a place for storytelling and how special effects were achieved, without giving us a lecture on the subject. All of this material is told in a compelling story concerning odd characters that populate a world filled with wonders most people never think about. I like the fact that many of the background characters are intimidating in one way or another. Their true natures are revealed in a more natural way as a result. We don't feel as manipulated as we might have been if Spielberg had been the director.

This is a warm movie from a director that can be cold in regard to our emotions, even when his characters are hot. He does not go overboard in trying to make us love everyone in the story,our affections are earned and they are reasonable within the parameters of the story. The 3D is not obnoxious, in fact it adds to the character of the movie in much the same lush way as the effects in "Avatar" did for that movie. I could feel a couple of story cheats on occasions, there was some pretty obvious foreshadowing of the train climax, but it was not supposed to be a surprise, it is designed to satisfy an appetite that the film makers created in us. This is well worth your time and money, I can't guarantee you will like it, but if the subject and film makers intrigue you, then it will be very satisfying.
Posted by Richard Kirkham at 6:49 PM