It has been nearly two weeks since I went to a movie and my addiction is craving something strong. Unfortunately, this weekend will be dominated by the Twilight Movie and unless there is time tomorrow, I will have to make due with that until the Thanksgiving weekend, when I will be stuffing myself. Stuffing myself with three family movies that I can hardly wait for and "The Descendants" if I can find it in the neighborhood. I will admit that I have seen all the Twilight Movies multiple times. Not because my daughters wanted to see them, both of my girls, now in their early twenties, despise "Twilight". Their mother on the other hand is an addict and since I love her, I willingly go to see things she wants since she has done the same for me for years. This series of books and movies is extraordinarily divisive. People who love them are passionate and can't get enough, and those other side is hateful in their disdain for the writer and characters she has created. Although it is rare, I fall somewhere in the middle. I don't think the movies mean the end of Western Civilization as we know it, and I am certainly not the demographic for these stories.

The first three movies were so focused on high school angst and emotion that it was sometimes laughable. On the other hand, I am a big sentimentalist and I understand the need for people to be passionate about the things they love. "Breaking Dawn" however, is another kettle of fish. Most of the big love triangle issues are gone, and the action of our vampires and werewolves is substantially muted. The movie breaks the story of the book into two parts, the first one is the soap opera, wedding and birth story that should be the hardest part to tell. For three films there has been delayed gratification for Bella and Edwards sex life to begin. The critics of these stories frequently claim that this is a Mormon fantasy of sexuality that puts off the dangers of sex until after marriage. It mostly seems to me about making the story a romance rather than a bodice ripper. The dreamy guys that want you, also want you in the best possible way. That should be everyone's wish fulfillment dream. Sex for the purpose of love and not just orgasm is romantic, rather than gross. "Breaking Dawn" has the most beautiful wedding, the most incredible honeymoon spot and the most tasteful wedding night sex that a super strong vampire and a regular mortal could enjoy. The director Bill Condon, who is highly accomplished and respected, has done what the story demands, translated this fantasy into an opening segment that will meet the needs of teen and pre-teen girls, and the mothers that brought them to this movie. Look, it's not my cup of tea but I understand that it will work for all kinds of people.

Having read the books, I also know that this story has two of the strangest twists, ideas, concepts, or what ever you would call them, in the series. It was odd to begin with vampires that are essentially vegetarians, a horror story with nearly no horror in it. Then we pile on a love triangle with a werewolf and it gets stickier. Throw in suicidal vampires and a vendetta driven vampire army and you push the boundaries. This story does not settle for pushing boundaries, it breaks through them in what could easily be the most ridiculous thing ever seen on a movie screen. Vampire birth and dog imprinting are the climax of the story and it is odd stuff. I thought that they managed to make it all much less laughable than it could have been. There were always going to be these two moments that determined if this movie works or fails. The birth scene is actually done in a very effective and traumatic manner. While there was almost no suspense and excitement in the movie up until this point, the way the birth story is shot and scripted, gives us some real investment in the movie finally.

The story of a wolf's imprinting needs a little bit more background. There are hints of it in a couple of scenes and there is a beach shot which suggests what the true nature of imprinting is, but it still sounds like a romantic type of relationship. However, the camera set up, and the flashbacks and flash forwards used in showing what happens to Jacob, make it a lot more tolerable and interesting than it would otherwise be. If this comes off OK, then the movie and Part 2 next year are home free. What remains is much more conventional, supernatural, plotting. The last shots of Bella and the stinger during the credits, make what will be coming, something to enjoy rather than dread. I doubt that this movie will convert anyone who feels hatred toward these characters and the actors who portray them, but it will not disappoint the fans and it will fulfill the wishes of the young viewers quite well.

My daughter went with us and she is a hater, but she said this was the best Twilight movie, that's mostly because there is a shot of the USC football team on a TV at one point and the Trojans make everything better. I did not care for the way the wolves communicate with each other in a point of the story near the center of the film, but I must admit, I don't know for sure how else they could get that exposition in. There are also some funny bits with the family of Bella's character during the story. Charlie, Bella's Dad, remains my favorite character. He has the best, most realistic lines in the movie. I did want to chuckle at a couple of things that were not supposed to be funny, but there were also some humorous parts that worked as they were intended. 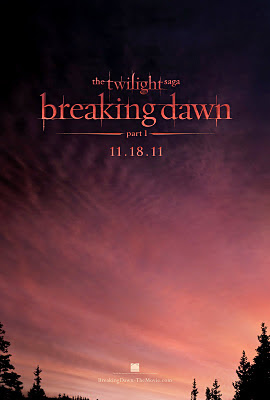 I'm not a fan of the series, but I am also not ashamed of having seen all of the movies quite often. Their appeal is easy to make out and they work for the most part. I was less annoyed by the three main leads in this movie less than I had been in the others, so that seems to be an accomplishment. There are other more offensive movies out there that I am happy to take on, but complaining about Twilight feels a little bit like calling some kids favorite doll ugly. Even if it is true it is unwarranted, and there is something nice about a kid liking something that is less than perfect.
Posted by Richard Kirkham at 3:14 PM