For the first time since I have started blogging, I have lost a post in cyber space. I posted on this movie yesterday and I am sure I saved it. However when I went back to edit it there was nothing there. So I'm starting over , my comments are not going to be any different but the tone will probably change as a consequence. When I saw the trailer back in the summer, I was really hoping we were getting a new Eddie Murphy movie, in which he would be funny again. Brett Ratner is one of those directors I mentioned before that fanboys love to hate. He put this together and subsequently he was chosen to direct the next Academy Awards. He chose Eddie to be the host next time out so there is a lot of speculation that everyone is happy that the movie turned out well. This has increased my expectations and the movie now has more pressure on it to deliver.

In many ways the film succeeds. I loved the music choice. The score sounds like a brutal action picture and not some lame family based comedy. The notes reminded me of the heavy diesel sounds of the movie "The Taking of Pelham 1-2-3 (the 1974 version). So from the first notes of the movie, they seem to be taking the story seriously. Murphy is in the first hour of the film in a very limited way. His character does not really become a part of the plot for the first half. This is a movie based around the theft of money which effects a group of decent hardworking people. I'll let others debate the Berine Madoff and Occupy Wall Street aspects of the story. I found the characters that had been taken advantage of to be likable, well meaning and conscientious employees. If this was a building that I lived in, I would feel well taken care of. It may be a fantasy of a wealthy apartment complex, but it was actually an appealing one for the most part. One reason that it is so appealing is because the head of operations played by Ben Stiller seems to be a genuinely nice guy, who is bright enough to know that hard work will help overcome other limitations in life. He makes the extra effort to be sure that the residents and the employees have a good life. When he discovers the betrayal of trust from one of his clients and that he has contributed to everyone getting ripped off, even though he was trying to take care of them, then he takes a personal interest in justice.

There is a scene where he is confronted by the FBI agent in charge of the financial swindle case, after he has continued to be solicitous to his resident, that we start to learn where this might go. Stiller's character appears to be taking crap from the swindler, simply because it is his job to do so. We see that he is doing it all in hopes that he will be able to salvage the fortunes of his employees. Later, when it is clear how indifferent the bigshot is to all the people that have helped make his life comfortable in the apartment building, Stiller goes off in one of the more satisfying bits during the film and the whole plot is set in motion. This movie is a slow build to the heist caper. The second act mostly involves getting the others to participate in a robbery to restore all of the employees financial losses. This is where Eddie appears and starts doing his schtick. He is an childhood acquaintance of Stiller's and has a long criminal past. He turns out to be nearly as coniving as the Wall Street bigwig they are going after. Most of the best gags are in the trailer, which is usually a disappointment, but they all work a little bit better in context and they were pretty good gags.

Stiller has been on the brink of becoming as irrelevant as Murphy, with sequels to Meet the Fockers and Night at the Museum. The originals had their merits but the sequels just scream "Product". Murphy has skipped the part where the original movie had some worth and has gone straight to the "Product" line to cash in. I know that not all movies are worth seeing again or were even worth seeing once, but at least you can tell when people are trying, even if they fail. Most of Murphy's films of late, don't even look like they try. Here they appear to at least be trying and that they succeed much of the time gives us hope that there is more to come. Hollywood is a better place when Eddie Murphy in in danger of actually being dangerously funny.

Everyone else in the movie is solid. I have had a thing for Tia Leoni since the first time I saw her in Bad Boys. There is something about her smile and weary sounding voice that hits the right chord for me, so I thought she worked as the conflicted FBI/romantic interest in the movie. Alan Alda plays the opening section so avuncular and supportive that when he turns out to be the real scum that screws everyone over, I was surprised that the two characters could exist in the same person, very obviously they can and he nailed this guy. One of the first things I ever saw Alda in was a TV movie about a guy involved in a car accident that ends up going to prison. He is an average guy in a place that scares the hell out of most of us average guys. That image helps make the possibility that this character will get his comeuppance even more appealing. There were some nice foreshadowing pieces involving chess strategy that make the heist elements and the legal element at the end more satisfying. 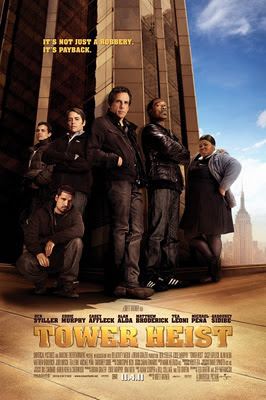 The heist element of the movie was a little less successful. We started with a serious story about average Joes getting screwed over and seeking justice, and finish it off with a little too much slapstick and pratfall. It is a comedy action piece, but the comedy parts take it a bit more over the top than necessary. The turnaround in the movie Trading Places was a lot more believable, on the other hand, if you are willing to go along with it, the antics here are certainly funny. The question is whether you can go along with it. I could for the most part, because the character that Stiller plays made me sympathetic, and Eddie Murphy had a lot of his swagger back. Maybe I would prefer something a little more real, but the movie does end with a touch of honesty as there do have to be sacrifices in order to win.
Posted by Richard Kirkham at 10:22 AM