Every year, films line up for the holidays to draw us in and become perennials for Christmasaholics. Some of them fail miserably. I can't imagine that anyone wants to snuggle up on an evening a few days before the holiday and share;"Fred Claus", "Jingle All the Way" or, "Deck the Halls". On the other hand, in the last decade or so we have added some real gems to our Christmas wish list. "Love Actually" may be our favorite recent Christmas film,but it sits on a shelf with the Jim Carrey motion capture "Christmas Carol" and "About a Boy". We apparently have a weakness for Hugh Grant. So many movies are aimed at the family audience and just get it wrong. "The Polar Express" is a wonderful book but as a movie it is a bit of a nightmare. So the question going into this holiday season is whether this animated 3D Christmas kids story, would be added to the naughty or the nice pile.

I am happy to report that "Arthur Christmas" is a worthy addition to the Santa Claus mythology. It is everyone's hope in doing a movie at the North Pole, that the workshops seem authentic and the mood is appropriately jolly. In "The Polar Express", thousands of elves suggested mass labor enslavement and an almost totalitarian way of life. This movie also features mass numbers of elves, some of whom are members of the crack Christmas Gift delivery team, but instead of taking itself seriously, it is the background for satire and mayhem. This is a high tech version of Christmas, with i-phones and tablets used to communicate and massive computers to keep track of all the inventory and deliveries. If you squint your eyes a little and think about it for a minute, you may get the impression that the movie is about the incompetence of Amazon.com as a tool for Christmas shopping. The newest technology might allow someone to rationalize a microscopic glitch in the system. It is that glitch that sets our hero, Arthur, off on his journey of self discovery. 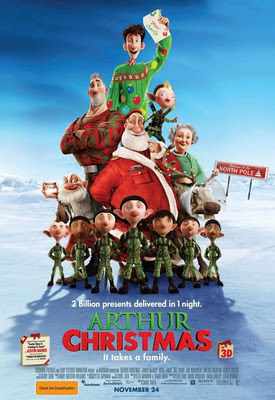 Nothing that happens will surprise you in terms of story elements. The path of this story arc is recognizable from the first minute. What will surprise you is the creative humor and wild characters that come with you on the trip. This is a story about a dysfunctional family that happens to be the Clauses. I skipped the Vince Vaughn version of this a few years ago, because with real humans, the energy required to sell the story would come off as maniacal. That is why animation is a perfect medium for telling this story. Silly ideas that might seem stupid with photo real characters and props, here seem like they are part of the natural environment. We did not see this in 3D, but I imagine that there would be some value in doing so, but the cartoon nature of the movie makes it easy to enjoy without the extra technology.

The characters interact in a way that makes sense for the story. There is no villain per se, just competing interests that sometimes cause friction for the characters. It is a multi-generational look at the process that goes into deciding how Santa should be for each new group of children. All the technology may make Christmas easier, (and it certainly makes it fun to watch), but it cannot replace what the heart of the Santa Claus myth is supposed to be about. It is fun to compare sleighs and old school reindeer with jet fueled power. We get to see how technology tracks the dreams of a child, but we know immediately that the human heart is the real file system for those Christmas wishes. All of the characters were voiced well, and I appreciated the fact that the actors are not mentioned by name in the opening credits. They may be listed on the poster, but they are not above the title and they are not instantly recognizable. The voices are primarily English, and for we Americans that usually carries a charm that seems inherent in British manners of speech.

There are so many visual gags in the movie that it is hard to pick out a favorite. None of them is dependent on a contemporary character or cultural reference like the Shrek movies are. We saw several trailers for upcoming animated children's movies, and if there is an Anti-Christ, he is the producer of the Alvin and the Chipmunks movies. We got a Lady GaGa reference in the trailer, and you know that is just the tip of the iceberg. Arthur Christmas is smarter than that. It's humor is based on character and visual gags, not on pop culture shorthand that will be disposed of in a few years. Some of the technology jokes might date, but the whimsy and heart in this movie should last for many holiday seasons to come. I hope I can share this movie with grandchildren someday, but until I have those grankids, I will be happy to share it with any of you reading this.
Posted by Richard Kirkham at 10:44 PM

I'm glad to see you enjoyed this as much as I did. I agree that it all just makes sense and that the motivations behind everyone's actions are completely justified and explained. It's definitely a worthy addition to the Christmas lineup and I'm very happy to have something fresh to watch for the holiday.

Isn't fun to find something that doesn't suck which you can recommend to people at Christmas time? Thanks for posting you original comments and then coming by here to share a bit more.