Call Me By Your Name

This film is getting a lot of praise for the performances of the two leads, Armie Hammer and Timothée Chalamet. It is a love story between an older man and a 17 year old boy, but Kevin Spacey is nowhere to be found. The pace of this film is leisurely to say the least. The story is set in Northern Italy during the summertime so there is plenty of lovely scenery to surround the two attractive leads as they engage in a protracted dance of "love that dare not speak it's name".  The nature of the romance is about the only reason I can think that the movie is set in 1983, except for the ubiquitous presence of the Psychedelic Furs.

The story meanders through a whole lot of plot points that end up going no where. Elio, the boy, gets nosebleeds. Don't worry, there is no terminal illness coming, it is simply an incident that has no bearing on the characters and their relationships, but it does allow the movie to add two minutes to it's running time. There is also a seemingly competing romantic interest for each of the young men. One is more developed than the other, but again, neither has much to do with the central relationship.

Michael Stuhlbarg and Amira Casar are Elio's parents. They are erudite, sensitive and well educated. They are the kind of family that sits together in the afternoon, and has Mom read out loud 16th Century literature, which she is translating from German for them, and which also happens to pose the exact philosophical question facing Elio at this moment. Should the Knight reveal his affection for a forbidden love?  This screenplay is too precious for it's own good. Near the end of the film, Professor Perlman has a long talk with his son, which reflects his deep understanding of romance, human experience and poetry. The words sound like they were composed with great care but they are delivered as if they are random thoughts that a warm hearted parent can trickle off the tongue at a moments notice. 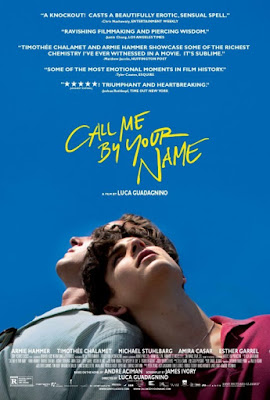 In addition to the slow pace of the movie, and the erotic theme, there are two or three other clues to show you that this is the indie darling of the moment. There are at least seven company credits at the start of the movie, which are of course referenced then in the title. Three sections have the obligatory cruise through the countryside accompanied by an indie alternative pop tune that is slow and meditative. If you thought that Rooney Mara eating pie in "A Ghost Story" was the weirdest food moment you would get in films this year, well be prepared to be surprised by Chalamet and his peach.

The actors are fine. Armie Hammer is appropriately casually arrogant in the way a young American must be. He flexes and poses in all the right ways to get the girls in the story hot, and of course it has the same effect on the lead. Elio is an artist, musician and intellectual with a brooding demeanor that suddenly warms up in a much too unclear manner. Staring out the window and  saying nothing is visual but it does not reveal the inner needs of the young man. Some of the events that take place are more useful at doing so, but they are often randomly distributed and the movie never seems to develop and dramatic urgency until the last ten minutes. It was a interesting story, that was told in a loose manner. A few good performances can't overcome the issues with the screenplay however.

Posted by Richard Kirkham at 1:38 PM