The characters portrayed in this film go to Catholic Schools and wear uniforms reflecting that status. Inspired by that vision and setting, I am prepared to make a confession. "Bless me internet for I have sinned. I am not a Catholic so it has been my whole life since my last confession,...I did not love this film."  Unlike Marion McPherson, I like Lady Bird rather than love her. After hearing so many podcast raves and seeing the 100% Fresh rating on Rotten Tomatoes (which finally dropped today to 99%), maybe I was expecting too much. Don't get me wrong, this is a perfectly fine movie and it has some excellent qualities to share with us, but it is not a "perfect" film, although I can say it is an accurate and honest one.

One of the guys on the "In Session Film" podcast, said his only complaint was that "hella tight" sounded too early for 2003. He apparently is unaware that the term "hella" has been around the NorCal area since the early seventies and there was a No Doubt song that featured the phrase the year before. To me it sounded completely authentic to time and place. The one thing only that felt inauthentic was a sex scene where the girl keeps her bra on. I understand and respect the right of the film makers to present their story in a manner that is non-lascivious.  This is not an 80s teen comedy after all, but Saoirse Ronan is not Janet Leigh in the opening scene of "Psycho" released in 1960. The idea that a teen Lothario would be passive enough to ignore this undergarment is just ludicrous. Find a more modest angle, or use a bedsheet, which is a lot more probable, and that scene would still work without a topless shot.

I'm really not trying to pick at the film, that was just one minor example of the slight imperfections that people might overlook because they love so much of the rest of the film. Who can blame them? There is a lot to love about this movie. The actors are all pitch perfect.  Saoirse Ronan is deadpan funny in so many scenes that we ought to be laughing a lot. I did, but not as much or as deeply as I expected. Humor is subjective at times, and the contentious nature of her relationship with her mother Marion, while amusing, was also painfully expressed, which did not always deepen the laugh but soured it. The timing of the two actresses, Ronan and Laurie Metcalf, cannot be faulted. They are fine, it is the occasional bitter dialogue that sounds honest but hit my ear just a little too often as trying too hard. The same was true in a scene where "Lady Bird" confronts her best friend when being given the silent treatment. They both throw verbal jabs that are funny, but just a bit too perfectly set up.

Maybe the reason I am not quite as responsive to this is that I have lived this story to a large degree. Maybe I was off a year, but I have a daughter who longed to be going to school in NYC. She had a boyfriend who turned out to be something different than she had hoped. She worked as a barista to make cash so she could pay her own way. She was definitely smart but had work habits that held her back and she found friends late in her high school career in theater. The love/hate relationship was maybe more with her father than her mother, so the crisp dialogue in this film might just be too on the nose.

My favorite scene in the film involves Lady Bird's sudden realization that she doesn't want to fit in with her new friends. She wants to go to the prom. That was certainly the opposite of my child, who would never have bent her behavior to curry favor with a group of people she wanted to be "in" with, with only two exceptions, picking up cigarettes and automatically taking a position designed to irritate one or the other of her parents. Lady Bird has to come to realize that abandoning her friend Julie, played with a heart breaking degree of honesty by Beanie Feldstein,  was a big mistake, and it is one of several transformative moments in the movie. Lucas Hedges gets a second opportunity within just a couple of weeks to make a mark on the film business. His part here is deeper and more significant than his role as the neglected surviving sibling in "Three Billboards outside Ebbing, Missouri", and the tenderness between Ronan and he is wonderful despite the bitterness that accompanies it. 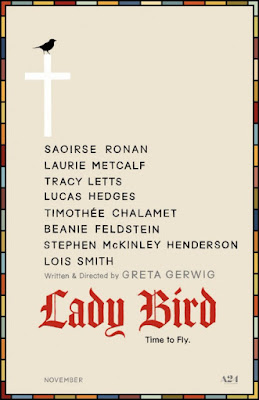 Writer/Director Greta Gerwig has fashioned a very effective coming of age story. There are plot elements that you can see coming, and the lines are sometimes to dead on, but it is a great script and film. It is however, just another coming of age story. The performances, elevate the movie quite a bit but the heaping of praise on everything about the movie burdens the experience rather than sharpening it.  There is nothing to not like about the film but that doesn't make me love it. To take advantage of one of the most derided quotes in movie history, "Love means never having to say you"re sorry". My guess is that it is apparent how I feel. Sorry.
Posted by Richard Kirkham at 8:02 PM