This is designed to make all the bloggers out there jealous. An evening with two Shane Black films and Shane Black himself. Since it is the Christmas Season, it only seems appropriate that Kiss Kiss Bang Bang is the main feature here. If you haven't had enough of the question whether Die Hard is a Christmas movie, get ready for the encore with this sour seasoned greeting. It is a delicious mixture of violence, comedy and tragedy, all told around the Christmas Holiday. It will certainly not be everyone's favorite pudding, but it will make a lot of people laugh at the holiday season and remember why they hate the holidays. 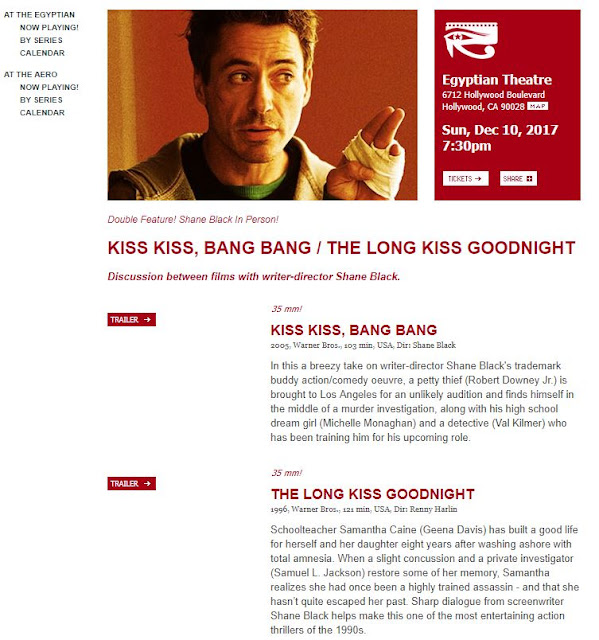 I love seeing films at the Egyptian and the American Cinematique has created some great programming for the month of December, including a new 70mm print of Lawrence of Arabia which a certain youngest child and I will most certainly be taking in during the upcoming break. Tonight however is all about the marvelous Robert Downey Jr./Val Kilmer action comedy. Written and directed by Shane Black.

From the beginning, I was reminded that I love this movie for it's idiosyncrasies. The titles are animated with shadow graphics and in a flash back sequence we see young Harry (The RDJ character) in his magician mode. The second character in this sequence who plays a major role later in the film is a little girl who grows up to be Harmony (the Michelle Monaghan character). That we pass the next twenty years in a few brief seconds is one of the marvels of how movies can be told.

The accidental nature of Harry's arrival in Hollywood and the guilt that trials him sets up the rest of the plot. This is a plot that is pretty complicated and may at times leave some gaps that are never completely filled. The Choice by Black to keep moving forward without lingering too much over the dangling threads is one of the things that keeps the film from getting bogged down in logical consistency at the expense of narrative drive.   When "Gay Perry" is introduced and becomes a foil for Harry for the rest of the film, we get a buddy comedy layered on top of a modern noir. Val Kilmer may not have had as good a role as this in the last fifteen years, and he was great.

The big question that film fans have concerns what is Black's thing about Christmas. Most of his films are set around the holiday and make explicit references to it. As he explained, "''it's like falling asleep in the back seat of the car with your father driving and singing a tune as the lights flash past your window. It is a feeling of childhood security knowing your Dad is taking care of you. When you get to L/A. The Christmas references are different, a broken figure of a saint or lighting that looks slightly out of place, but it's still Christmas. It's a culturally shared experience." He credits "Three Days of the Condor" with inspiring the Christmas motif in his films.

Black was modest and honest in describing his freshman directorial effort. He was happy to give credit to improvements in the dialogue to actors who improvised during rehearsal. He also noted that some of the photographic effects were a result of accident rather than planning. He uses the term "running and gunning" as the description of their filming schedule. One person asked if he had plans to film any other movies with different holidays and he joked about his time bomb race against the clock set during Breast Cancer Awareness week. There was also a question about the design of the story being a reverse "Chinatown" where the incest angle is different and not what you think it is going to be. "Every assumption you make is wrong and at the end you are faced with an old man bedridden that you beat on." 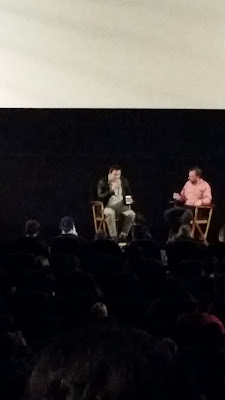 The second film on the program was "The Long Kiss Goodnight" and he frankly admitted that he wrote it alone in part as a way of coping with some depression. He was complimentary about director Renny Harlin but admitted there were some things that he would change about the film, which is one of the reasons he wanted to direct himself.

He strongly advised us to stick around for the second feature, which only about a third of the audience did, but we were rewarded with a great over the top serving of 90s action film that featured Geena Davis and Samuel L. Jackson. He debunked the notion that the plot has any 9/11 foreshadowing, as he put it, "it's just a movie."

Both films were on 35mm but Black's parting comment was that 35mm bows in the middle and is fuzzy, so he is happy with digital projection.

Posted by Richard Kirkham at 5:51 PM