The problem with doing your top ten for the year before Midnight on December 31st is that you could see something that would force you to adjust your list. That's exactly what's happened with this film, and now I have to revise the video and post that I had planned for tomorrow.  Since it is late on New Years Eve, and my tail end is dragging from a outdoor project I worked on today, I will ask your indulgence and tell you that you have to wait for the full review until later. However, my comments here should make it perfectly clear how I feel about this film.

Till tomorrow then my friends.

So it took a little longer to get back to this than I'd hoped but it is still worth it. This is a film that deserves to be talked about. To start with, I remember the events that this film covers in vague outline form. Many people watched it closely but our lives were taking dramatic new directions 24 years ago so it was not a daily download for me as it was for so many others in that period of time. As a soap opera in real life it was compelling, but my recall of all of it was that a bunch of stupid people were involved in doing something stupid, which happened to be taking place on the world stage.

The movie claims to be based on interviews with various participants in the whole affair, and when they all agree on the events, that's how they are depicted on screen. There are however wild divergences in how the story plays out, and what screenwriter Steven Rogers does in those instances is contrast the two versions with slightly different emphasis and typically a great deal of humor. It seems apparent to me that in the long run he does come down on the side of Tonya Harding herself. When it comes to credibility, although she does not seem very reliable, in contrast to everyone else telling their version of the story, she is the voice of reason. Her husband/ex-husband Jeff Gillooly, is as unreliable a person as you are likely to ever see in a film much less meet in real life. As portrayed by Sebastian Stan, he seems ineffectual and pathetically needy. He is also an abusive spouse who strikes out in a way that most of us would see is a problem from the beginning, but that based on Harding's life, might simply be a minor character flaw which can be forgiven. Since there was a record of what was said between him and his dim witted friend, the "bodyguard" Shawn, it seems that the only intelligent thing he did in the whole process was cut himself off from Shawn at the set up arranged by the FBI.

Harding's status as an athlete in the world of competitive Ice Skating is vividly realized with true discomfort as we see the elitism and snobbery that she faces despite being the most physically talented woman on the ice. At the end of the film there are clips of the interviews used to put the story together with many of the actual people involved[not Tonya herself]. When you see the clip with LaVona Golden, Tonya's Mother, you will see the true genius of Allison Janney's performance. That woman was a nut job and the number she did on her kid had to have been something. Again, this is Tonya's version of events that drives that part of the story but it explains the chip on her shoulder and the willingness to put up with abuse for far too long. Janney is always a welcome performer in any film I see. She is dead eyed and without redemption as LaVona. The same "damn the consequences to hell with you" self centeredness displayed by Francis McDormand in Three Billboards Outside Ebbing, Missouri, is present here. Janney is willing to play the most unlikable character in a manner that is based in the reality that the character doesn't give a f##k what anybody else thinks. That has got to be a freeing experience for an actor and she makes the most of it.

The performance that stands out the most of course is the title character played by Margot Robbie. Costuming and hair-styling accomplish a lot, but the range of the performance goes well beyond that. The two girls who were the younger versions of Tonya were both excellent and they set up this character as much more sympathetic than you would ever have believed. When Robbie steps into the fifteen year old Tonya's skates, she has to be proficient at skating, angry at perceived injustice,  and resentful of the way that the world demands a hero and a villain in this sort of competition. Her desperation at the sentencing after all the events take place feels like the most authentic human moment that Harding had in the film. In all that precede this moment, Robbie was chillingly direct. This one counter-point shows how broad her emotional vocabulary is and it makes the other moments in the film feel more important as a consequence. Of course she did not learn to do the triple axle, but Director Craig Gillespie, manages with technical prowess to make you think she did.

This is a serious biopic about a much derided pop culture figure that also happens to be hysterically funny. You probably would not imagine yourself feeling much empathy for the central figure at the start of all this, but by the end, you hope her version, as sad as it is, is the most accurate. You also hope her life has gotten better, because despite being the greatest woman ice skater in the world at one point, her life pretty much sucked up to the "incident" and after that, it did not get much better. The two women's performances are awards bait, but the film deserves to be seen as worthy also. This was a real surprise and a pleasant one despite the tawdry topic. 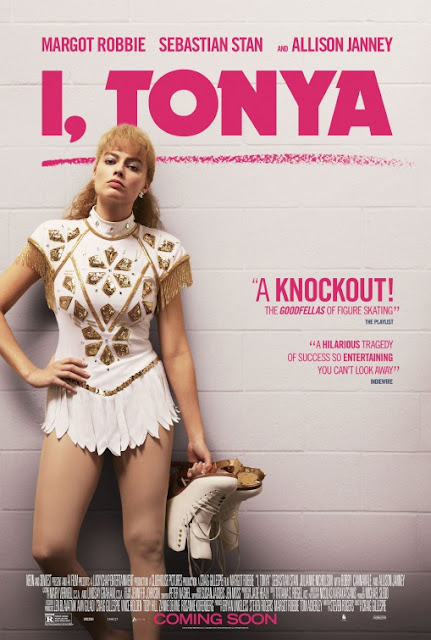 Posted by Richard Kirkham at 10:06 PM