I'm going to be frank, I have never seen a film by Jim Jarmusch before. He has made a dozen films I have heard of and several that never crossed my radar. It was clear from the aesthetic I could see in promotional materials that his style is idiosyncratic and idyllic. I cannot say how representative the current film is of his movies, but I can say that if "The Dead Don't Die" is typical, I don't think I made a bad choice by avoiding his movies. It's not that the film is bad, it is simply not in sync with the way I want my cinema experience to play out. I heard high praise for many of his other movies and if I come across them I might stop down and give them a try, but I will not be seeking them out.

The trailer for this film suggests a comedy full of dry wit and zombie action. They have done a good job selling this movie to an unsuspecting audience. The film's sensibility is very different from the way it plays in the promotional material. This movie is slow moving, just like the zombies. The three main characters are so dead pan for most of the film that it is a relief when one of them finally shouts at another. This is the most passive group of police officers you will ever encounter. The zombie attacks are not particularly horrific, they are just perfunctory and slow. I suspect that what Jarmusch has done is made one of his character pieces and just hung it on the genre here to draw some interest. Well it worked, and now I have seen one of his movies.

Yes, it is a comedy, so you can expect some deconstruction of the genre as a way to develop humor, but it goes further than that. It feels as if the movie is mocking us for watching a horror film in the first place and then subverting our expectations of humor by isolating the jokes so far from anything else that is funny, that you may wonder if it really is supposed to be a comedy. There are so many "meta" moments in the film that feel like a put down rather than a wink or a nod. As the two police officers figure out what is going on by referencing the script and their lines, I began to feel left out rather than included in the joke. There are a few isolated laughs in the movie, but nothing is ever sustained for long and then there are huge passages of time where nothing seems to happen. Three kids driving in a car passing around an energy drink does nothing to enhance the story. Three other kids in a juvenile detention center appear several times in the movie and they do nothing interesting, have no relevance to the plot, and they disappear without any resolution. It certainly feels like something that would be part of an independent film project, but not the kind of independent film I'd want to go to. 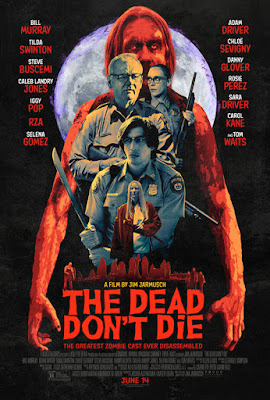 The cast is one of the selling points of the film, it is large and packed with performers you might enjoy seeing on screen. The only ones who get much chance to do anything are Tilda Swinton and Adam Driver. In another one of those quirky moments that highlights that indeed the film maker himself is just a hipster from Cleveland, Swinton walks out of the story in an incongruous manner completely detached from the events of the story. The biggest laugh Adam Driver gets is when he shows up at a crime scene in his personal automobile. Meanwhile Steve Buscemi , has to play an exaggerated version of a Trump voter, Danny Glover finally is too old for this shit, and Carol Kane is a one word one joke cameo.

Maybe if you are a fan of the directors style, you will enjoy this film more than I did. I found the on the nose criticism of genre conventions to be off putting and the lack of pacing to be annoying. When the zombies do start to appear, the film picks up for half an hour or so, but then it meanders off onto paths that lead no where and a conclusion that is so self satisfying as to be a disappointment. That's right, zombie movies usually end on a down note, so let's ape that but make fun of it at the same time? I just didn't care anymore. Marketing may make this film Jarmusch's most successful box office result, but it is not a movie that will earn much love from those who see it under false expectations.
Posted by Richard Kirkham at 10:06 AM