The most unasked for movie of a series becomes the most essential film of the year.

You know that when this film was announced, everybody said "whaaat? We already have the perfect conclusion to the Toy Story Series, we don't need a return visit to screw it all up." Then the teaser spots were weird, and the new main character is a plastic fork? You gotta be kidding, right? Well leave it up to Pixar to get it right in the end. They usually know what they are doing and this film might give you the confidence to even feel a Toy Story 5 could be justified.

Many of the same themes that were covered in the first films are raised here as well. All of us have a need to be needed. Maslow seems to be right in this regard, even when it comes to the toys. From early on, Woody has been the key character in the adventures of the Toys. He is a fussbudget with a need for control and a strong desire to be at the top of the toy pile heap. He is so likable that we overlook his selfishness and jealousy. In the end he seems to over come these faults for the greater good. He has been a leader mostly by example in the most recent films, although his need for control does put him in conflict with other characters from time to time. "Toy Story 4" shows us a Woody who has become less relevant than he would prefer. It's not that Bonnie, his new kid dislikes him, it's as simple as her needs are different and he becomes a side character in her play. Even so, Woody feels the drive to protect Bonnie and make sure she is happy, because that's what a toy's purpose is. Protecting Bonnie's emotional state however may not be in the best interests of anybody, including Bonnie.

Woody has become a surrogate Helicopter parent. Striving to placate Bonnie by restraining "Forky" and hovering over every little tear that Bonnie sheds, regardless of the cost to others. The theme of the "Lost" toys and what happens to them becomes a threat and a wish fulfillment simultaneously. When Woody and Forky encounter some other toys that have been rejected, we are obliged to ask ourselves some hard questions. Is it better to persevere in the face of permanent failure or should we choose a new path covered with uncertainty and the potential for happiness or disaster?  Toys choose both routes in this film and we generally see satisfying results although there is sadness in those choices.

After encountering a benevolent character who turns into an evil antagonist in the previous film, our hero Woody faces almost the reverse situation in this film. Gaby Gabby is a doll that seems malevolent from the beginning. Let's face it, her team consists of ventriloquist dummies without a voice, maybe the most terrifying thing this side of clowns. She wants something from Woody that he does not want to give up, and she uses some extreme techniques to get it. In a twist that only a group as talented as those at Pixar could achieve, we feel differently about this character toward the end of the story. She and Woody share the same need, but Woody has had more than his portion of that need while Gaby never has. There are two big emotional turns that almost certainly will moisten your eyes, and they involve a character that we have been suspicious of from the get go.

It's not a spoiler to mention that Bo Peep returns to the story and her character is a lot more essential to the plot than when she was nervously biting her lip and hoping for Woody to succeed in the first film. Although you can never free yourself from the need to be wanted, you can control the level of need and satisfy it in different ways, and that is the path that Bo offers to us and to Woody. We have already learned that the Toys have different personalities, I suppose if we dwell too long on some of the existential issues raised in these movies, we will need a lot more pot. Let's just say that the existence of a character and then it's non-existence are pretty deep concepts for a movie that is aimed at children first. Forky asks the question, "Why am I alive?" and the movie tries to make a case for the answer. Even a character as feckless as Forky, can grow in emotional needs, and so can the other toys as well. 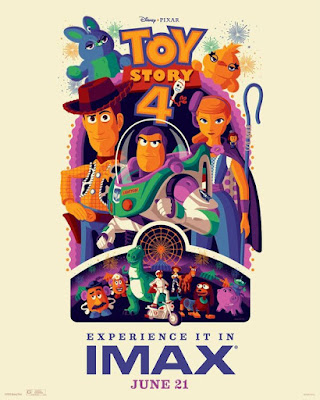 Of the new character introduced, the most fun are Duke Kaboom, Ducky and Bunny. There is not really an arc for their stories, those characters exist to enrich the environment of the main conflict and they manage to do so in the most amusing of ways. If there is a future to the Toy Story franchise, it should be in new characters like these, invested in new problems rather than recycling old ones. That's not a knock on the current film, it's just a pragmatic suggestion.

Without undermining the close of the original trilogy of "Toy Story" films, "Toy Story 4" manages to entertain us and move us in the right ways. Once again our expectations have been subverted, thankfully is a manner that should leave most fans happy that Disney/Pixar went to this well one more time.
Posted by Richard Kirkham at 10:34 AM