I'm starting a new series that I hope to come back to on a regular basis. When I have a few of these entries I will put up a page with links to each one so they will be easy to catalog. There are several blog sites that do a very similar theme, forgotten films. I have participated on a few podcasts with one of my on-line friends talking about movies that fall into this category, and perhaps inspired by that, or simply my love for seventies nostalgia, I thought I would start off with this movie. 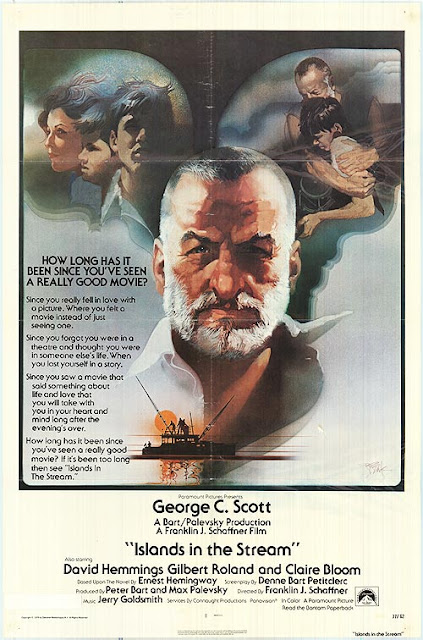 This has nothing to do with the Kenny Rogers/Dolly Parton hit written by the Bee Gees, although some of the romantic themes in the song could apply to the events in the story if you look hard enough. It is based on a posthumously published work by Ernest Hemingway and features a character clearly based on Hemingway himself. Supposedly it was turned down by Steve McQueen but I can't imagine a more perfect choice for the part than George C. Scott.

The film is set in the Bahamas at the start of WWII. Most of the Caribbean Islands were still British possessions and as such were targets of German U-boat harassment. For the most part, the was is a distant irritation, on the Island here, the main war is an emotional one being fought by an iconoclastic artist and the various people in his life.  Thomas Hudson is a renown artist who has given up painting for industrial sculpture. He has retreated from the social scene he occupied at one point to live and work in relative isolation.

Scott as Hudson appears to be something of a misanthrope, in fact as he awaits the arrival of his sons for a summer visit, he actually won't even go to the plane to fetch them, even though it has been four years since he has seen them. The oldest boy is named after him, Tommy and he is played by future Die Hard White Night Hart Bochner. 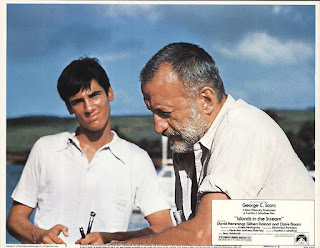 Tommy and the youngest boy, Andrew are happy to see their father although they remember him as a stern and cranky man. The middle boy David is the one who has reservations and antagonism toward his father. He and Andrew are the children of Hudson's second wife, the best friend of his first wife that he still carries a torch for. David begins his visit with his father in a surly mood and at one point flails out during what was initially a fraternal pillow fight but turns into a moment of physical catharsis.  Instead of the stern patriarch, Hudson appears to be a patient man who recognizes that his own failings as a father are haunting his middle boy.

Reconciliation occurs through a test of physical stamina and mental will when  David hooks a large game fish on one of their boating expeditions. In what seems like a very macho Hemingway moment, the fish and the boy tussle for the father's respect. Scott conveys real emotional sympathy for the boy but understands his need to prove himself. The surprising resolution to the moment is the emotional heart of the movie.

There is an earlier scene where the chaos of the wold intrudes on the idyllic summer of the family. A British freighter is sunk off the shores of the island and debris as well as one human victim wash ashore on the beach near the artist's house. Hudson manages to keep the boys back away from the dead man but there is some powerful foreshadowing taking place here as he contemplates the fate of his children in a world at war.

There are some locals that make up the crew that surrounds Thomas Hudson in his self imposed exile. David Hemmings plays Eddy, Tom's close friend and rum soaked partner in the fishing boat charter they apparently own. Eddy becomes a friend to the boys and the voice of gin stoked wisdom at times. His performance is a standout in the film as he conveys a pathetic but confoundingly tragic figure at the same time. Also on hand is Julius Harris as Joseph the Captain of the boat. Harris was an actor I discussed recently on a James Bond Podcast I hosted. His familiar face was a welcome addition and he plays a friendly supporting part rather than the bad guy in this one.

After the interlude with the boys, there is a third act in the film featuring a reunification, at least briefly of Hudson with his first wife. This sets up the final segment where Hudson makes a commitment that he might have resisted before the summer with the kids and the moments with his true love. This is where the adventure element of the movie kicks in. The film does feel like a series of chapters in a book and it is organized that way for us as well. This may explain the reason that the film feels so satisfying to me, because like a lot of seventies movies, it is a thing unto itself. If you read the copy on the poster at the start of this post, you may laugh at the blatant attempt to market the film as something special. It feels old fashioned, even in 1977 when the film was released. However, it worked on me. This slow film about a man coping with a world he made and one that he has avoided, hooked me with it's cinematography, sentimentality and a score by Jerry Goldsmith that is absolutely beautiful.
Posted by Richard Kirkham at 4:10 PM