One way that you can tell that Charlize Theron is a great actress is that you can believe she has fallen for Seth Rogan in this movie. Of course it plays to some of the worst traditional chauvinist fantasies that a beautiful woman can be in love with a shlub like this, but you know what, it works because the actress sells the idea and plays it in a low key manner with just the right amount of trepidation to start with and then a full blown commitment.

This is a romantic comedy filtered through the irreverent humor that typifies movies with Seth Rogan. The premise seems like it is something that should not work in the real world but we do have the American Political situation as it is, so it seems plausible. The President has decided not to seek a second term and is willing to endorse his Secretary of State to replace him. She would be the first female President and her background will be a point of contention in the election. Masters of Analytics have assessed her on her qualities and they need to punch up her humor numbers. Theron is the Secretary of State and Rogan is a long ago neighbor who happens to be an acerbic writer with some wit. After they connect by accident she chooses him to help craft her voice and make more of her points in an amusing way.

This is sort of the flip side of "The American President" with a little bit of "The Contender" thrown in. Layer on a big helping of "There's Something About Mary" and you will understand what you are getting into. It is formulaic, but there are tweaks to the formula that are outrageous and make the movie funny in a way that we probably should not be laughing about. Rogan is presented as a clown at first, bumbling his way into the scene by making stupid mistakes. Theron is overworked, idealistic and ambitious, all things that typify a woman in the world of politics. Still, there are bits that are amusing before the two start to fall for each other. I loved the micro naps that Theron's character indulges in, and Rogan's mode of dress is infantile to begin with. Once they are thrown together and the sexual part of the relationship begins, the humor becomes more coarse. Frankly, the ultimate threat the couple faces from hacked footage on his computer is something that goes over the top, but "There's Something About Mary" is over twenty years old now, so it will probably be old hat for audiences weaned on that sort of humor. 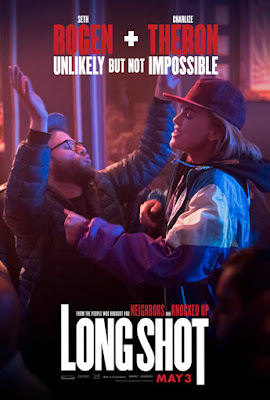 O'Shea Jackson Jr. plays Rogan's best friend and he gets to have a moment that I never thought I would see in a Hollywood film. The two of them discuss politics at one point and Jackson's character reveals something about himself and cogently explains his position and it is a moment of sanity about how the world ought to be. The willingness to look at other points of view is what allows us to function as a society, and this film acknowledges, even if it is for humorous purposes, that this is not the way politics currently functions. I don't want to suggest that this is a serious political film but it does have some interesting themes and that is one of them.

In the end, your enjoyment of the movie will depend on your tolerance for the romantic comedy beats that make up the genre, and your willingness to care for the characters. I was won over despite feeling that both characters were a bit self centered to begin with. I liked the way their past is woven into the story to make them a bit more real, and the awkwardness of their attraction is not ignored by either of the characters. A real romantic partnership exists when the two people complement one another in the ways that their partners need them to. It may be a cliche when Jerry Maguire says in the romantic climax of that film, "You complete me," but it is true of real love and that felt like it worked here.
Posted by Richard Kirkham at 11:41 AM

Rogen's style dominates the first half of the movie but it is more subdued towards the end. You can wait and catch it at home, but be aware there is a vulgar visual joke that becomes the plot twist at the end. It may very well gross you out.

Will be watching this film very soon. Your identification of the "traditional chauvinist fantasy" also crossed my mind while watching the trailer. Perhaps it's at least progress to feature more dominant, powerful women relative to our regular old male protagonist. Hard to say, will have to see the film first. But great review!