Please don't mistake what I am about to say as a dig at the movie, "Booksmart" is well made, targeted at an audience that should embrace it and it is really well cast. It is not however the second coming. Every time a film has some progressive element which appeals to cinema fans, it gets pushed at them as if it is medicine that will cure the reactionary ills that drive the movie business. Trying to force fans of independent movies into a moment runs contrary to the instincts of those fans.  I think that's exactly what has happened to this movie. Had it been discovered by cinephiles and shared with their own passion, it could have taken off like some of the movies it is compared to. As it is, there was a big launch of this, focusing on the fact that it is a female centered film, and the world shrugged.

The two young actresses who star in this film are accomplished performers.  Beanie Feldstein was terrific in "Lady Bird" a couple of years ago, playing a similar character with a very different personality. Kaitlyn Dever was familiar to me as a long running character on the TV series "Justified" where she was frequently the standout in a cast of very good actors. The two of them together in this film are convincing as off center smart girls who may have missed something along the way. Maybe it is a little regressive to suggest that the road to empowerment might include having a little respect for people who don't share your perspective. In that sense, I can see how feminists, progressives and others might suffer some shade in the afterglow of the film. Listen to the segment of the speech Molly is supposed to be giving as her valedictorian at graduation, and compare it's tone to the one she actually completes. Social Justice hearts were probably breaking all over the place.

Director's often get praise for elements of a movie that they are not always responsible for, typically the script. Actress turned director Olivia Wilde deserves credit for some of the things that she clearly is responsible for. The relationship between the two girls is documented not just by what they say but by the body language they use when saying it. The dance moves, the head shakes and facial expressions come out of a vision of who these young women are.  They are confident but also a little too cocky. They are shy in the way most teens are, they feel overshadowed by pretty people and a high degree of social uncertainty. Wilde blocks some of their conversations as intimate but presents them as public. The most artistic piece of visual flair is the reveal of Amy's fantasy in the pool at the party they finally make it to. The underwater shot is just the thing to throw cold water in the face of what seemed like a traditional happy ending (although we know it can't work out the way we are hoping, there has to be a third act shift). 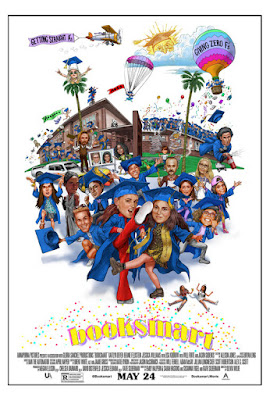 Because I am not in the demographic this film is aimed at, I really don't get or care for some of the soundtrack selections. Modern hip hop filled with expletives is annoying to me and it is typically annoying at a high volume. The softer indie rock sound seems so wane as to almost evaporate before you hear it. This is a dualistic choice on the part of the film makers and it probably works better for a younger crowd and maybe a female audience as well. I will say that the biggest laugh I had at the theater came when Alanis Moristte's 90s screed on relationships was being done karaoke style by the wrong people.

I can easily see how this movie could become a cult gem like "Dazed and Confused" has. Audiences who find it now will come back to it in a few years and think of how prescient they were for embracing this film. Others will discover it where most films like this are going to end up in the next few years, streaming on some service. They will howl with delight and wonder how they missed it when it first came out. This will develop a reputation as a hidden treasure, you can bet there will be a dozen hipster critics at the end of the year with "Booksmart" on their top ten lists. I can't say that they will be wrong, but I can say the movie is a little too smart for it's own good. Selling yourself as the next "thing" is almost certainly going to doom you to a pile of "New Coke" and "Segway" discards.
Posted by Richard Kirkham at 5:23 PM