This is one of those posts that I look forward to writing after seeing a movie. That usually comes because of one of two reasons, I either hated the movie and can't wait to dump on it (see Us) or I am overjoyed and want the world to share in my enthusiasm. So take a guess what I am motivated by here, it's OK, I'll wait... 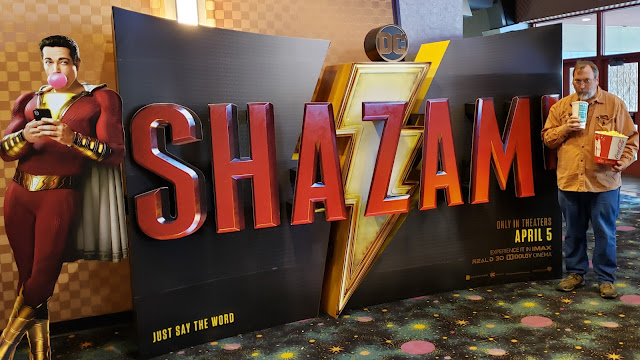 "Boom" you probably guessed right, I loved this film. "Shazam!" is the kind of movie going experience I crave. When I walk out of the theater, I want to tell everyone I see how much I enjoyed the film and I want them to go out and see it too. Let's spread some happiness and put your tail in a seat for this lighthearted piece of comic book fantasy, that delivers exactly what most people who loved comics as a kid first got from them, ...a rush of pleasure. "Shazam!" is not going to be a breakthrough cinematic event. The movie is not going to set up a compelling narrative that will allow us to explore characters with deep flaws and themes of human frailty. It is simply going to entertain you for a couple of hours and leave you feeling refreshed rather than exhausted.

Director David Sandberg and screenwriter Henry Gayden have managed to remove the stick that has been up the bum of the previous DC films. Our hero here is not brooding, the color palate is not dark, and the humor is not gallows. "Shazam!" instead is a conventional hero origin story, told with a sense of humor and the goal of entertaining the kid in us who loved comic books because they were fantasy adventure and colorful. It doesn't try to re-invent the wheel, rather it puts the wheels on a straightforward and simple tale of good vs. evil, and rides it all the way to the end. You can see what is coming from a mile away, but you want care that there are no story surprises because the way you get through the story has all of the small pleasures.

Billy Batson is a teen foster child who has run away from several group home in pursuit of finding the Mother that he was separated from at a very young age.  He becomes the vessel of a wizards power, to fight against the seven deadly sins which are being harnessed by a grown man who was once offered the same opportunity but could not pass a test of worthiness. The two stories of the hero and villain are set up in the first half hour, not with a rapid fire action sequence that throws us into the middle of what we don't understand (ala Captain Marvel) but instead with a coherent series of events that allows us to be invested in both characters. Mark Strong, who I think most movie fans will have loved from a bucketload of other films, but especially "Kick Ass" and the two Kingsman movies, plays the grown up version of Thad Sivana. Sivana is a kid who is misused by his family in ways not too dissimilar from Billy, buy he is clearly under the influence of the deadly sins. Billy, played by an appealing young actor named Asher Angel, is a ne'er do well , who has yet to figure out his real source of strength. When he becomes the superhero, Billy is played by Zachary Levi, who is just goofy enough to convince us that he is a fifteen year old occupying the body of a god-like man. The flashy costume and a struggle to come up with an appropriate moniker for the new hero are just two of the plot points that provide a plethora of humor.

Freddy Freeman is another kid in the foster home who helps Billy become the hero that we all will need. Jack Dylan Grazer, who played the asthmatic Eddie in "It", has grown a couple of inches but can still play the youthful and hopeful type that he is cast here as. The banter between him and both versions of Billy is what drives the story and the comedy. I found something to laugh at ever couple of minutes and Grazer is one of the sources of that mirth. Levi gets to ham it up as a kid who is just not quite grown into the body he is occupying. Grazer occupies the role of side kick, mentor and brother just right. The group family has some interesting characters and fortunately they don't go into overdrive to make jokes out of eves archetype that gets thrown in. Little sister Darla goes right up to the edge of annoying, but never crosses the line. She is also so adorable that you might be willing to forgive her if she did. 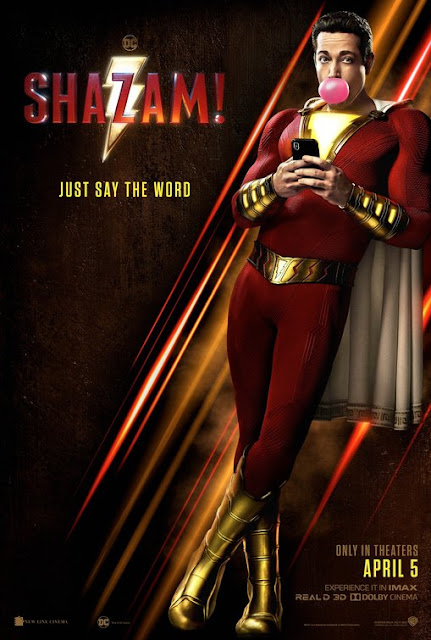 "Shazam!" is a bit of a send up of comic book movies, but it is not a deconstruction of the myths. This story just takes advantage of the youthful fascination with power and uses it to explore responsibility a little bit, but laughter a lot more. The tone is reminiscent of "Sky High", a kids film from back in 2005. This is a playful movie that has the usual adventure action story attached to it, but it is executed with a sense of fun. DC fans will find themselves amused at some of the lightly self depreciating humor of the film. Be sure to stick around for a mid credit sequence and a final stinger. They are not as hip as the MCU films try to be, but both work for this film.

After more than a month of dreary films that don't inspire me much as a movie goer, what a refreshing way to break the cycle and fall back in love with going to the movies. I can't imagine anyone not being able to enjoy this. I would take this movie over almost all of the other films I've seen this year. Not because it is a great movie, but because it made me feel great about going to a movie.
Posted by Richard Kirkham at 3:30 PM