Here is a change of pace review for this site. I had an opportunity to watch a video screener of a small U.K. film which is getting a digital release in a couple of weeks and it will probably not be playing in a theater so it is a bit unusual for me to cover it here. The movie is "Small Town Hero" and it is set in a bucolic village in England which is beset by some troublesome aspects of modern life. You know the sorts of things that grind the average person down; littering, problem parking behavior, drunk teens creating problems for local shops. The setting could be anyplace that fancies itself as a nice place to live, but does have the rough edges that come from social interaction with those with whom we have minor conflicts.

Pep is an angry younger man that most of us movie fans can identify with immediately. At the start of the film he is off on a rant about rude theatrical behavior, including the use of phones during a show. I may not have said the words out loud the way he does, but I have thought them plenty of times. The injustice of rude behavior often tips us into reactions that our more rational selves would refrain from. Pep stops listening to his rational self and starts tuning in to his own anger at the world. As we learn in the course of the film, he has a failed relationship with an imperfect woman with whom he shares a child. Billy is seven years old and splits time between his Mom and Dad. Pep dotes on the boy and fancies himself as a good person. In part because he is tired of the small injustices in the world, he takes a stand for a local shopkeeper who keeps losing his windows to drunken teens in inebriated shows of power. Pep steps in, starts a nightwatch in front of the shop, and after bullying the vandals a bit, becomes something of a local hero for taking a stand. Fueled by his belief that he is making the world a better place for his son, and maybe being seen by his ex as more worthy, he begins a crusade against all sorts of petty crimes.

At first, although we can see that his behavior fuels his anger, we are likely to be supportive of his acts. The film is put together as one of those interview/reality/documentaries that have become ubiquitous in the last few years. Having got some favorable publicity from his stand against the drunken vandals, a film crew starts following our local vigilante as he develops into a one man crime strike force. The arc of the story will not be too hard to surmise. Writer/Director Darren Bolton has visualized the worst case scenario for this kind of social justice. When Charles Bronson picked up a sock full of quarters forty-five years ago, the audience was primed for a revenge flick where justice rather than the law was the solution. There was a muted attempt to suggest that street vigilantes could inflict damage that would be problematic, but that reservation was largely put aside for a 70s audience oppressed in their own homes by violence. "Small Town Hero" presents the darker side as a more realistic scenario. Pep, set free from social inhibition, rewarded for his chutzpah and embraced by a neighborhood watch type group, begins to embrace his empowerment.

The film manages to keep the story involving by using some humor and genuine moments of tenderness. For instance, Pep has stickers made up to plaster on the wind screeds of automobiles that have parked in an inconsideration manner, who among us has not wanted to do something similar?  The film crew catches him urinating on someone he found urinating on the public street, how appropriate. Unfortunately, these little victories are not enough to assuage his anger or his ego. He escalates the violence against those who are unwilling to conform and the people who supported him before fear that he has become a bully. When another local intervenes in a petty theft and gets some coverage, Pep looks for bigger success for himself. He keeps telling himself that he is doing this for others but the focus is usually on him. In spite of the fact that we see him as a belligerent small town tyrant, he also has moments that reveal his vulnerability. Pep interacts with Billy in a loving way, and when he realizes he has crossed a line after being berated by his ex, Pep apologizes to Billy in an off screen moment that is cleverly included in the film, without us actually seeing it. His rage at the phantom figure of the new man in his ex's life, is set aside when she gives birth to Billy's little brother. We are likely to feel one last moment of sympathy for Pep when one of his crusades gets very brutal but results in a moment of happiness for the elderly Mother of his ex. 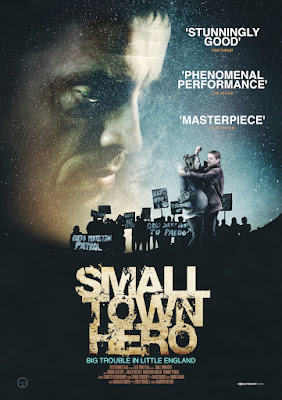 Everything gets darker in the second half of the film as the need to return to hero status drives Pep to seek out a pedophile in the neighborhood.  The problem is there is probably not a real threat, but many people will be traumatized by the paranoia and desperation that takes over this angry young man's life. As a story telling device, the film crew works to help us be included in the escalating events. The weakness in the execution here has to do with the implausible passivity of the film crew. This sort of amoral behavior on the part of the team making a movie about reality, has been seen on the screen at least since "Network" and maybe even earlier. "Man Bites Dog" and "Nightcrawler" plumb similar themes. The indifference of the film crew is not really the story here. Just like in "Natural Born Killers", we are fascinated by the subject of the film and only partially taken aback by the supposed "objectivity" of the movie makers.

This is a tough little film with something to say, but what it is saying is pretty sour. It ends on a moment of tragedy that has been foreshadowed for almost an hour. Our sympathies are challenged and changed, while we are still drawn to the main character. There is a terrific sequence where the film crew is recording a series of rants that Pep goes off on as he drives his car. The camera is in the back seat and Pep sometimes turns to look at it as he grouses and yells and rails against perceived injustices. He holds nothing back. The editing on this is clever as each rant blends into another and at the close of the sequence we get a brilliant humorous payoff. I don't know that you will enjoy the film, despite it's moments of dark levity, but you will certainly admire actor Simon Cassidy as Pep, and the whole crew who put this together.


Posted by Richard Kirkham at 5:20 PM