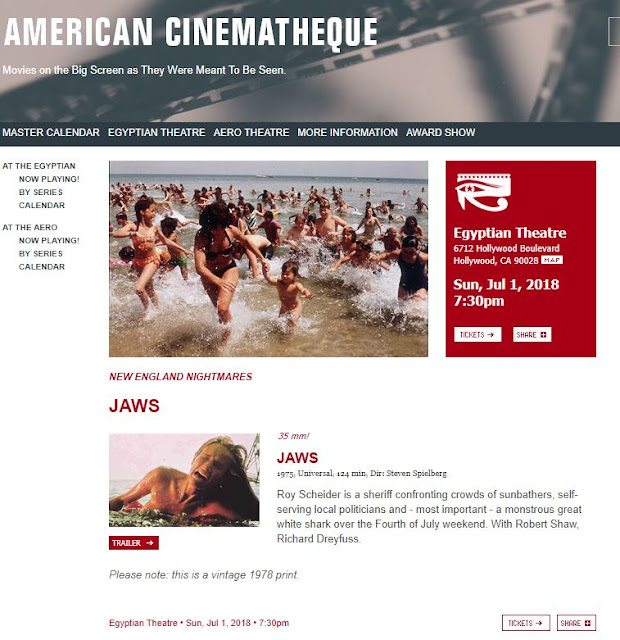 As long time readers of this blog know, JAWS is the "Quint"essential Independence Day movie at this site. I've shared a number of posts on this greatest of adventure films, and there is always something to add each time. Last night gave us two distinct experiences to add to the memory file. 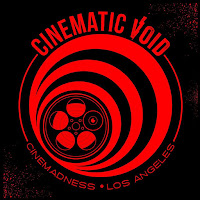 First of all, this was a film presentation, not a digital screening. This was a personal print provided by director Sacha Gervasi, a friend of the American Cinematique. It was worked out by an organization called  Cinematic Void,  which has been presenting a series of films on New England Nightmares. The print is from the 1978 re-release of the film and it has not been cleaned up or re-mastered. The host mentioned that it was extremely difficult to find film prints for Jaws, everything now being digital. They asked their personal friend Director Gervasi who accommodated them. Much like the print we saw last year of John Carpenter's "The Thing", there is a lot of red hue in the color palate as the film stock fades and bleeds over when projected. Never the less, it is always great to see a "film" and not just computer images masquerading as film. The grain and imperfections do diminish the look of the movie, but they also induce memories of seeing films from the time period, which do wear down after thousands of screenings.

Now second, the guys introducing the film, and many of the audience, made the mistake of describing "Jaws" as a horror film. People, this is an adventure film with horrific elements but it is hardly "horror". While it uses some of the "B" movie tropes of horror films, like the opening scene or the jump scares when sharks and bodies appear, the vast majority of the movie is taken up by a struggle of a common man to face down political, cultural and natural obstacles in overcoming a problem. The second half of the movie is pure sea-faring adventure.

This movie is 43 years old, and yet, 600 plus people paid to see it in a sold out presentation last night. 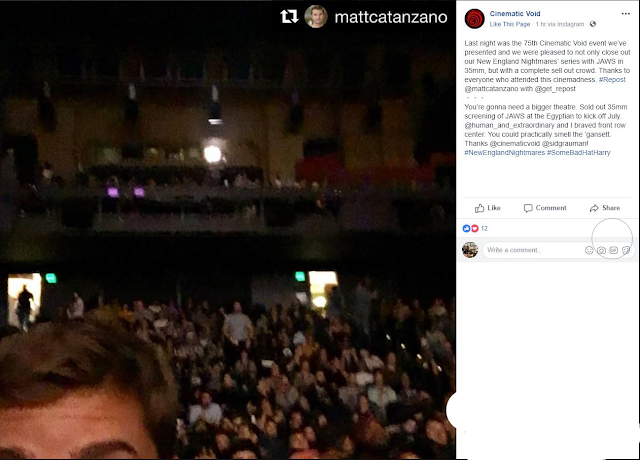 The power of this film continues to draw in fans, as it has done for this family for forty years. This is my daughter Amanda's favorite movie, and we dressed appropriately for the occasion. 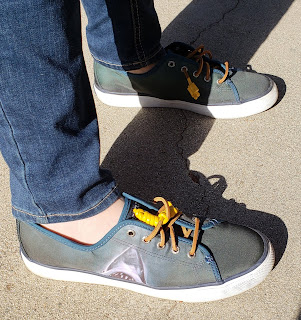 Check out these kicks. The tie ends of her shoes are the barrels Quint uses to bring the shark to the surface. The inside sole of the shoe also has an image of the Beach Closed signs from the film. Saturday was her birthday, and she considers the movie to be a continuous gift that she receives every year. To feed that animal, check out the bed set that was one of my gifts to her . 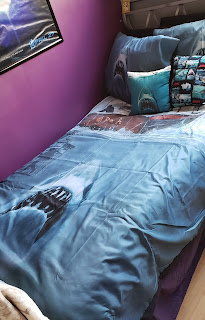 (We have another Screening scheduled later in July at the Hollywood Bowl, see you there. )
Posted by Richard Kirkham at 12:21 PM