This is the kind of treat that might keep me from moving out of Southern California in spite of the traffic, social culture and politics. You just don't get to see "John Carpenter's The Thing" in 70mm most other places.I'm a fan of the American Cinematique at the Egyptian Theater. While some of my blogging colleagues are dismissive of the programming [one said it's great if you want to see Lawrence of Arabia four times a year (which I do)], there is a lot of programming that would not be the same in the smaller Aero Theater on the Westside. Tonight's experience means more because it was shared with a sold out audience, a group of standby folks queuing up in the hopes that there are some cancellations and a sound system that does justice to the film in an audio space made for it. 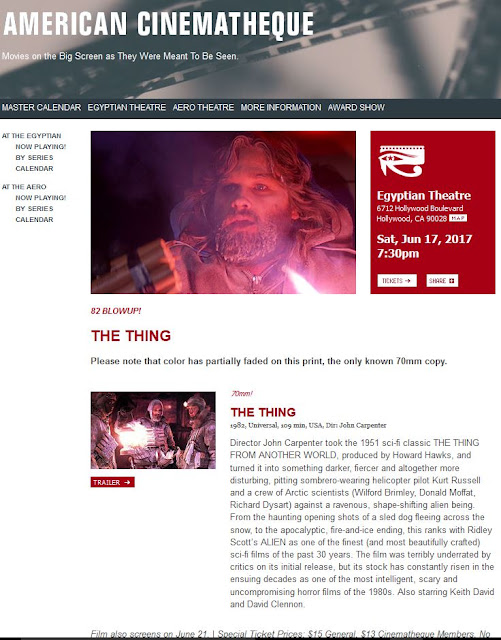 The one drawback of the screening was that the film stock is a bit faded. Seeing how this 70mm print is one of the few in existence and that the film is thirty-five years old, that was a small price to pay to see this horror classic. The six track stereo sound more than compensates for the slightly red hue of the print. Listening to Morricone's haunting electronic score while watching the images of Antarctica swirl by is a definite treat. The sound effects also benefit immensely from the complex sound design combined with the multi-track recording.

There are so many things to appreciate about this film that it is hard to stay focused. I will try to concentrate on three or four elements that always impress me whenever I watch this film. The first "thing" that jumped out at me tonight was how creepy the film is before we even know what is happening. The supposedly mad Norwegians tracking the sled dog across the snow and shooting at it without much effect is just the start of a disturbingly effective canine performance. When the husky reaches the American compound and Clarke scratches him around the neck to reassure him, the dog is sort of cute. Subsequently though we see that the dog is watching everything. It stares out the window at the search party that goes back to the Norwegian installation. It quietly observes the goings on at the American base with a steady eye. As it moves from room to room and encounters a figure that we only see in shadow, it seems to be acting so deliberately and thoughtfully that it can't be a normal dog. Finally, as the dog is lead into the kennel with the other dogs, it's approach is awkward and not dog like at all. This is all part of the methodical set up that builds to action rather than having action fill the screen constantly.

Once the dog is introduced to the kennel, the second great "thing" about the film that everyone who loves it talks about gets introduced. This movie is filled with special effects shots and monster creations that are not just on screen. This film was made with practical effects that the actors interact with and . Their presence in each scene feels so much more normal than the CGI creations that are found in the inferior prequel from 2011. The slime covered "thing" that is morphing into the dogs is disgusting to look at but we can't look away either. The tendrils that penetrate the other animals wave in a manner that was not created in a computer but looks like it is organic as they flip around like so many air hoses without nozzles. When Copper applies the defibrillator to Norris, we get a real shock with blood and sinew and bones being snapped. Rob Bottin and his crew make these effects dramatic, disgusting and at the same time believable. When the legs sprout from the dismembered head of one of the scientists, after that head has used an elongated tongue to pull itself to safety, you might be tempted to say the same words that come out of Palmer's mouth, except we know Carpenter is not kidding, he wants us to laugh sure but mostly to be horrified, task accomplished. 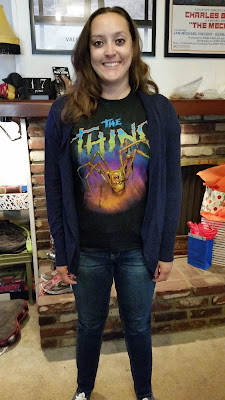 Since it is my daughter's birthday at the end of the month, I gave her the gift I picked out a little early, it is a design from this scene on a great t-shirt provided by a company called Fright Rags. One of my online correspondents works for this company and they have licensed images from this movie that show how the practical effects look so much better, even when they are being rendered artistically.

One final topic to include in this brief post on what many would consider the greatest horror film of the last half century, the star Kurt Russell. R.J. MacReady is an intemperate iconoclast that somehow manages to be a figure that all the other men at the station look to. Part of  the reason may be that they trust his competence as a pilot, after all he makes two hazardous trips to the Norwegian camp and returns with more information each time. Also, he has a cool demeanor as the crisis gets hotter and he manages to best them all when their paranoia turns on him. Any of those things might inspire confidence in him as a leader, but the biggest asset he has is that he is played by Kurt Russell. Russell is in full badass mode coming off a previous Carpenter film, "Escape From New York" just the previous year. He has a thick mane of hair, much like the king of the jungle, and his machismo is indicated by the awesomeness of his beard. Only a guy with this much charisma can carry off the weathered and bent out of shape sombrero that he wears in the film.

There are dozens of other little moments of perfection spread through the film, but I will leave most of them for a more elaborate post, maybe in my series "Movies I Want Everyone to See". It is a good film that shows how quickly character can be created on screen. There are a half dozen good laughs in the movie that would put some of today's comedy films to shame. The cast of actors also deserves praise and credit that I simply don't have time for today.  There is at least one more screening this week at the Egyptian. If you are within a fifty mile radius and don't go to see this, you will hate yourself later. 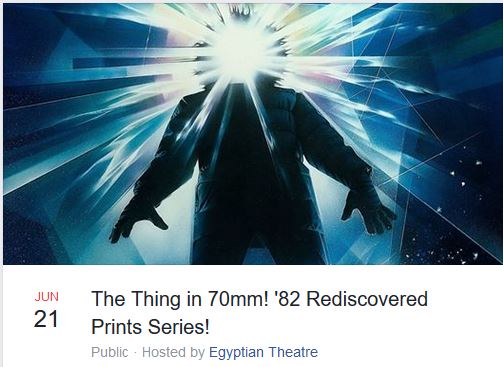 Big films on the Big Screen, that's why I love going to the Egyptian Theater!!!