For a number of years, films about the War on Terror seemed to be cursed under a shroud of bad box office.  "The Hurt Locker" award for Best Picture not withstanding, these films were relegated to a pile of failure and artistic disappointment. Matt Damon could not bring people into "Green Zone" The combined talents of Tom Cruise, Meryl Streep and Robert Redford actually kept audiences at bay in "Lions for Lambs". The less said about "Stop Loss", Rendition" and "In the Valley of Elah" the better. It seemed for some reason, Americans in particular were not interested in the subject. It turns out that what they were not interested in was being told what a failure military action is, and that the War on Terror is not worth fighting.

Two films, "American Sniper" and "Lone Survivor"  dispelled the notion that Americans were indifferent to the subject or worn out by the themes. It was the viewpoint that seemed to alter the trajectory of films set in the War on Terror. We were not disinterested in seeing films about this war, we were turned off by the negative tenor these movies took toward the political decisions being made. When the movies focus on the hard work and sacrifice made by Americans in fighting the war, rather that fighting the politics, the movies seemed to succeed. "13 Hours" set up a military disaster but showed it from a perspective of respect for the men involved. Today's film also features a number, it is also based on declassified information and it shows the heroism of our soldiers rather than their faults. Look, no one wants to live in a world where we can't see flawed people and decisions. But we certainly should not be limited to them and a movie like "12 Strong" tells us why.

The threats from Al Qaeda and the Taliban were real. 3000 people died on September 11, 2001 but the people of Afghanistan had been suffering for years under torturous conditions imposed by fervent believers in the interpretation of Islam that had taken control of their country.  The Taliban shelter Osama Bin Laden and Al Qaeda forces, and they carried out their own form of totalitarian domestic terrorism under the guise of a Nation. This film focuses on the initial military incursion by the U.S. into that territory after the 9/11 attacks. It is a complex world where alliances come together and fall apart on a weekly basis. There is tribalism that makes diplomatic matters difficult to manage. Into that situation, America sent a dozen soldiers to begin the fight and attempt to create a unified opposition to the ruling Taliban.

This movie has a few of the touchstones of a sentimental war story. There is a family at home, there is a band of brothers, and there are heroic acts by most of the men involved. There is a difference however. This story is really focused on the details of the confrontation and the difficulties of finding and keeping allies. There are only a couple of scenes where home comes up as a subject. The characters are not defined by quirks or ethnic identity or by particular personality types. This is a procedural film where the process is the real star and the men involved, while critical, are not the hook that the story hangs by. Chris Hemsworth is fine in the role as Captain Nelson, but the character is muted for much of the film. With the exception of the opening, and a moment of frustration with inconsistent allies, he is never a commanding central figure. He is the leader of the team, but it is not his personality, history or family that causes us to follow him, it is his professionalism in trying to carry out a complex assignment. His character had not been combat tested before this mission, and even though there is a small reference to his baptism under fire, the story is not about him personally. Michael Shannon plays his second in command and he always comes across as a serious and thoughtful soldier, a man who knows what his job is. There are a dozen Special Forces troops on this team, and we do meet them but rarely get to know them. We know what they job is, we know what their capabilities are but as I said, this is not really a character piece.

The director of this movie is Nicolai Fuglsig. I have not heard of him before and there is not much on his IMDB page. He does a very credible job keeping the battle sequences riveting and coherent. This is a war where they really are not uniforms and the battle lines are not drawn as clearly as we might like. He made a helicopter ride into the territories pretty exciting, even though there is no gunfire or enemy action involved. The horseback combat is also done well and is shot form plenty of angles, including from above, which helps keep the events straight in our heads. 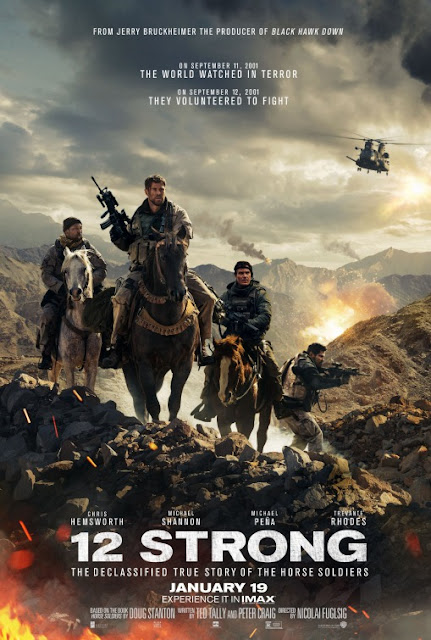 As with most of these stories where ther is an actual historical record, the truth turns out to be as involving as the movie. The twelve men on the mission are accounted for with the real life counter parts. Several text cars at the end tell us the information we need about the after the story story. There continue to be political elements with some of the characters. Navid Negahban has had a prolific career in the last two decades playing variations of Middle Eastern characters. He is General Dostrum in this film, a man who remained part of the Afghanistan rebuilding as the war continues to this day. Negahban is impressive in the scenes he has with Hemsworth, where he conveys a cagey warrior who is suspicious and potentially duplicitous for his own purposes.

Clearly, a movie that celebrates an important victory is going to resonate more with American audiences than one that dwells on a failure. This is an efficient summary of the early part of the War in Afghanistan and maybe it can show a bit more clearly what problems the U.S. faced. Inclement weather, mountainous terrain, uncertainty about the forces you are working with and a vicious enemy. We sent good, well trained men into this situation and they came out with what might have been the greatest defeat for Al Qaeda short of killing Bin Laden. I'm willing to let the tense music, visual fireworks and the story details pull me in. If it is less than emotionally manipulative, I don't see that as a fault, here it is it's virtue.
Posted by Richard Kirkham at 3:33 PM