Anyone who has cruised by this site, but especially at this time of year, knows that JAWS is a driving force in my movie life. Shark movies can be fun, stupid, exciting or irritating. Sometimes they can be all these things at once.  "47 Meters Down" is no Jaws, but it is certainly better than two of the three Jaws sequels, and as a summer diversion it is pretty much what you want for a warm afternoon or a cool evening with a romantic partner. You will get a lot of comparisons in this post, let's face it, there aren't that many shark movies, and those comparisons should help you decide if you want the take the plunge and spend your hard earned cash.

The two young leads in the film play sisters who end up on an off the books excursion while staying at a Mexican resort. The premise combines some of our worst fears. We are in a foreign land, trapped in waters that we cannot see through, running low on oxygen with sharks surrounding us. If you look up the word nightmare, most of this should appear there. The movie simply has to find a credible way for these events to play out so that we will be willing to endure it all. For the most part, things move as they might if this was a real story. After the set up, the girls are the only characters we actually see for the most part.

Director Johannes Roberts uses some dynamic photographic effects during the titles to create some foreshadowing. He and his co-screenwriter Earnest Riera build in enough complications to keep the time on the ocean floor dramatic and tense. Sometimes, as in most films of this ilk, the events seem to pile up just a little too much. It is true that we need some dramatic tension based on the environment, but every action turns into a complication designed to keep us squirming in our seats a few minutes longer. The dialog is also a little spotty. There are way too many premature celebratory moments between the sisters, and they sound odd coming from frightened people still trapped on the bottom of the sea.

I don't know anything about diving, but the ability of the girls to speak to each other seems a little suspect to me, but it might be possible with the kind of equipment they are using. While I appreciate the choice to eschew events on the surface during the crisis, it means that we get a lot of long periods where the girls interaction feels a bit awkward. The scenario in  last years "The Shallows" made verbalized conversation unlikely, but the words spoken in that film felt a lot more real than what is happening here. "Shark Night", "Bait",  and "Open Water" all have different elements to them to keep the story going in each of those films, so I guess it's not a surprise that the combination of events here plays such a big part in this story. 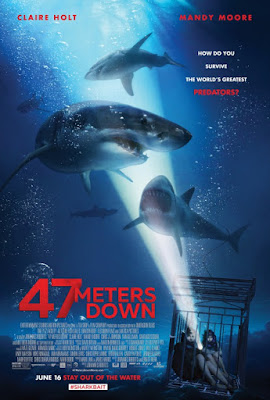 So for comparison purposes I'd put this on a par with "Jaws 2", it is a shark movie with other things to distract us from the fact that the sharks are not constantly attacking. "The Shallows" is a much better movie, but then the lead in that film did not have to try to emote through a three paneled diving mask and radio mike the whole time. If you pay close attention to what is said in the film, you will see a bit of a twist coming from a mile away. The only surprise was how long they played it out. Some of the teens behind us were unhappy with the climax of the movie but unlike some other films this year, this ending felt more deserved to me. We have our annual big screen trip to see "Jaws" scheduled for next weekend, until then, this toe dip in shark infested story telling will do. It can't sit on the same shelf as the Spielberg classic, but it fits in nicely next to "Bait" and "Deep Blue Sea".

Posted by Richard Kirkham at 7:43 PM