Sometimes you just have to sit in awe of what great film makers are able to achieve in the hot spot of their careers. For the ten years between 1969 and 1979, Francis Ford Coppola was the undisputed king of American Cinema. Four of his films were nominated for the Academy Award for Best Picture, two of them won the award, and a third film that he wrote also was named Best Picture. This evening I celebrated in 45 years of basking in his masterpiece, "The Godfather". I surreptitiously read the book when I was fourteen years old. I know my parents would not have approved but it was something everybody was talking about so I took a paperback copy with me around the corner from our apartment building and sat on a curb, devouring it for several days. Sure I memorized the racy bits, I was 14, but I also could tell this was a tremendous story and it should make a heck of a film. I'm not sure how I managed to talk my Dad into taking me to see it, but I know we went that Spring, when the lines were long and saw it in the Alhambra Theater. I was maybe a little self conscious sitting next to my old man when the nude scene showed up, but the rest of the film was so powerful that such discomfort never detracted from the experience. That was 1972.

I'm sure I saw the film a couple more times in the following two years as I awaited the sequel, a concept that up to that point was largely the realm of genre films.  One of the first dates I had with my future bride involved dragging her to a double feature of the two Godfather films, one where it turned out they decided to skip an intermission between movies. So my girlfriend and I sat there for six and a half hours straight, and she still married me a few years later. The film was one of the first acquisitions I made when VHS tapes came along. Before the price points dropped in the mid-80s to create a sell through market, most films were only available for $70 or $80 bucks, and this was more than thirty years ago. I pulled that trigger as soon at I could. It was a substantial commitment for a young married couple, and I was trying to get by on part time teaching. That's how important as a piece of art and culture it was and is to me.

I've seen it several more times over the years, on the big screen. The last time was two years ago when it was accompanied by a live orchestra performing the score for three hours as the film played for nearly six thousand people in what was at the time the Nokia Theater in Los Angeles. Tonight's screening was nothing so fancy. It was a 4K projection at a Chain Complex on a Wednesday night. There were maybe twenty people there, but when it was all over several of us spoke to one another about what a wonderful experience it was. There was applause at the end of the movie, and the somber silence that always comes when that door gets closed on Kay's face.

I tried to watch things that I did not always focus on in prior screenings. There are two exceptional moments when the camera slowly takes in what is happening in front of us and lets the anticipation occur without fanfare. The reveal of exactly what it is that Jack Woltz has in his bed is horrifying enough. We watch as he turns in his sleep ever so slightly, then the satin sheet gets pulled down from his face fairly slowly. He feels the dampness but hesitates just a moment, the right amount of time before he throws down the bedclothes past his waist, and then, there is the quick reveal of Khartoum and the lingering horrified cry of fear and anguish from the movie producer, which extends in a echo as the scene shifts to Don Corleone with just the slightest of smiles on his face. The whole scene is iconic but watch how the pacing builds it so well. The second spot I distinctly remembered is in the restaurant before Solozzo and Captain McClusky make their exits from the story. We know what the plan is, we can see tension on Michael's broken face but we have to sit still as the waiter, brings a bottle of wine, shows it opens it with an old fashioned corkscrew that takes some time, and then pours a small amount into a glass that Solozo then extends to Michael. Waiting for the waiter to go through that whole ritual, without any dialogue, just the characters sitting there waiting themselves, it is something you don't see in movies anymore. 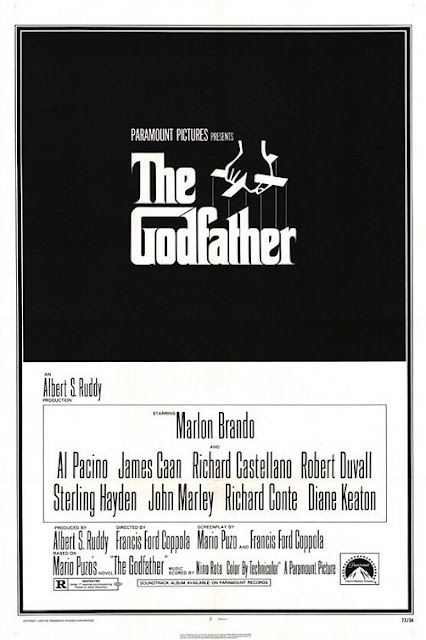 There are a hundred other moments that deserve some attention, but that will have to wait for another time. Everyone reading this has almost certainly seen this film and if you haven't what the hell is going on? Make an effort to share this experience with a group of strangers in a dark theater. Be prepared to try and catch your breath as it is stolen from you by the brutal poetry of this story and film. There is a reason that many consider it the greatest film ever, it is visual and emotional perfection.
Posted by Richard Kirkham at 11:28 PM

This was the first time I saw The Godfather in a theater after watching it many times on TV. It was amazing, still buzzing from it. The wedding scene was a new experience, every face was in focus. And those sequences in Sicily, which usually slow the movie down for me, looked beautiful. Whenever Brando would speak a strange stillness went through the theater. I could go on and on! You can feel the greatness coming off the screen.

Once again demonstrating that a theatrical experience is unique and worth the extra effort. You are so right about the wedding scene, the details are so much richer on the big screen.